US-50 (Lincoln Highway) is one of the country’s last intact transcontinental highways, connecting West Sacramento with Ocean City, Maryland, a distance of 3,073 miles.

US-50 through Sacramento was constructed in the mid to late 1920s along what is today Folsom Boulevard. Beginning in the mid-1960s, US-50 in Sacramento County was reconstructed as an eight-lane freeway along a new alignment.

As the Sacramento region has grown significantly over the past decade, commuter traffic on U.S. Highway 50 – in both directions, from downtown to the Sierra foothill communities – has increased substantially.

Initiated in 2016, the Fix50 Highway Enhancement Project, also known as the US-50 Design-Build Multimodal Corridor Enhancement and Rehabilitation Project, is currently constructing new peak High Occupancy Vehicle (HOV) lanes from the US-50/I-5 Interchange (downtown) to east of Watt Avenue, completing the HOV system that extends up to the foothill community of Cameron Park.

Along with the addition of much-needed peak HOV lanes to reduce congestion, the project is repairing 51 lane-miles of pavement and rehabilitating the Portland Cement Concrete (PCC) pavement in this seven-mile stretch that was originally constructed more than 50 years ago.

Flatiron is the design-builder on this infrastructure project, responsible for the design, engineering, and construction of the entire project, and is working with design partner WSP and its team, which includes Aztec. 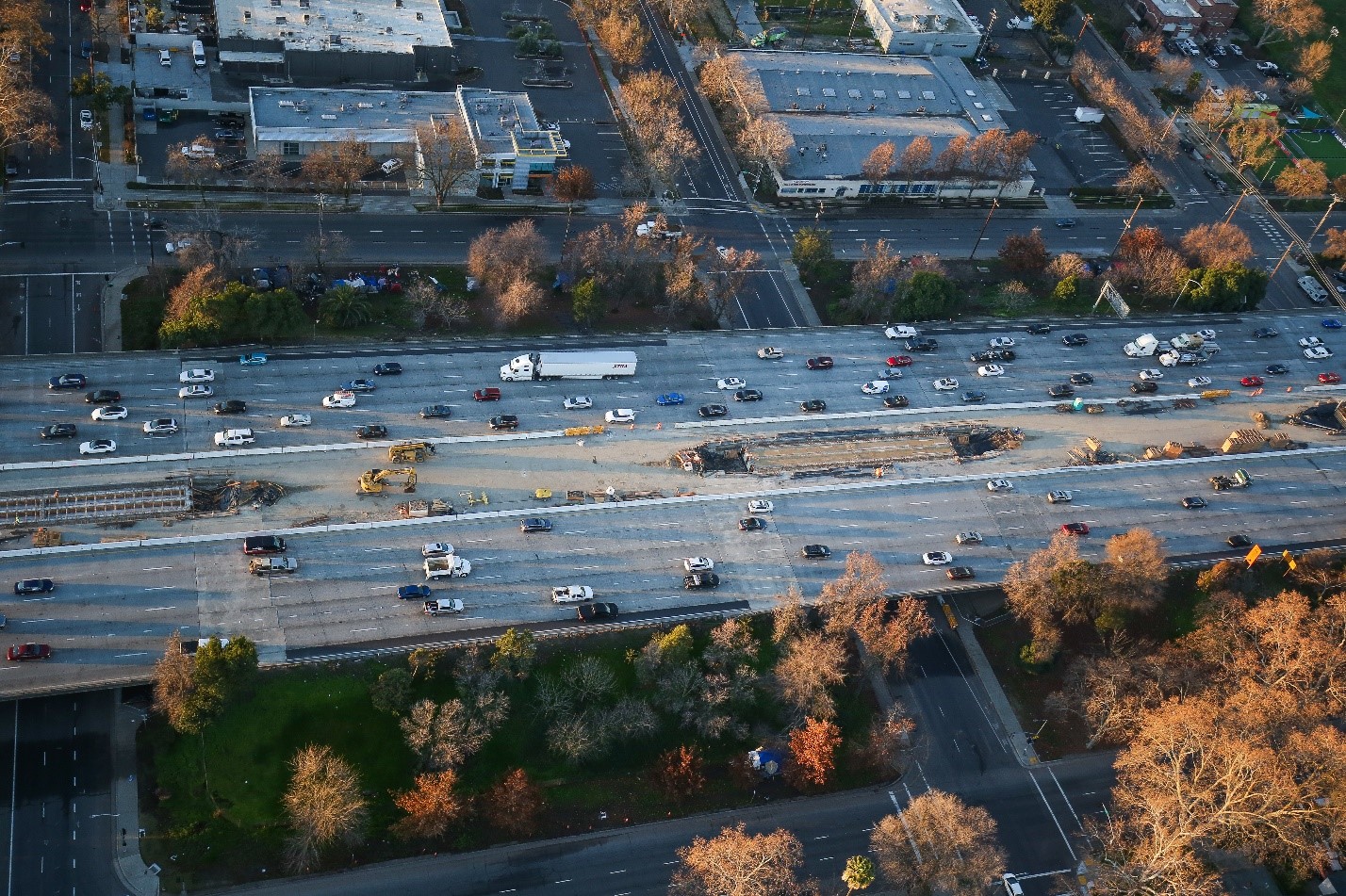 Flatiron is constructing new inside, peak-traffic HOV lanes that span the existing east- and westbound lanes in an expansion of this elevated portion of Highway 50 through central Sacramento. Photo courtesy of Flatiron.

The design-build contract for this $460-million project, one of the largest in the Sacramento region, was awarded to Flatiron in April 2020. The project is funded through the State of California’s Senate Bill 1 – Road Repair and Accountability Act of 2017 in the amount of $388.6 million, the City of Sacramento’s Measure A Transportation Sales Tax Program, along with additional state and federal funding.

The existing freeway PCC pavement was originally constructed between 1967 and 1971, and has come to the end of its service life. To rehabilitate this section of US-50, the scope of work includes the addition of 14 lane-miles of new peak HOV lanes and 51 lane-miles of new longer-life pavement.

The new roadway will be constructed with Continuously Reinforced Concrete Pavement (CRCP) at a thickness of 1.1 feet, with ¾” steel-bar reinforcement, atop two inches of HMA and three inches of crushed stone. Vanguard Construction is performing the CRCP work.

The project is also improving roadway drainage by rehabilitating three pumping plants that move groundwater away from the highway. Further improvements include the installation of new lighting, signage upgrades, and implementation of Intelligent Transportation Systems (ITS).

In addition, the project includes the Sacramento Regional Transit District’s Light Rail Expansion Project, which will increase the frequency of Gold Line service from Sunrise Boulevard to Downtown Folsom from every 30 minutes to every 15 minutes.

Eleven new bridges are being expanded to accommodate the new HOV lanes that are being added. Extensive portions of US-50 within the project area are elevated, with an 18-foot separation between the eastbound and westbound lanes. To add new lanes to these stretches of freeway, columns are being built to support the new, spanning pavement.

Illustration courtesy of The Sacramento Bee.

At the Elmhurst Viaduct near Stockton Boulevard, concrete bridge footings and columns were recently formed and poured. Superstructure formwork, rebar placement, falsework, and stringers are up at the Camellia City Viaduct, the longest bridge on the project. The same progress is taking place at the Southside Park Viaduct, the 15th-16th Street Viaduct, along with other single-span bridges in the W-X section of the project, which is named for the two surface streets that the freeway runs between. For the Riverside Viaduct, abutment walls have been poured and superstructure work is well underway. Several sections of deck concrete have already been placed. 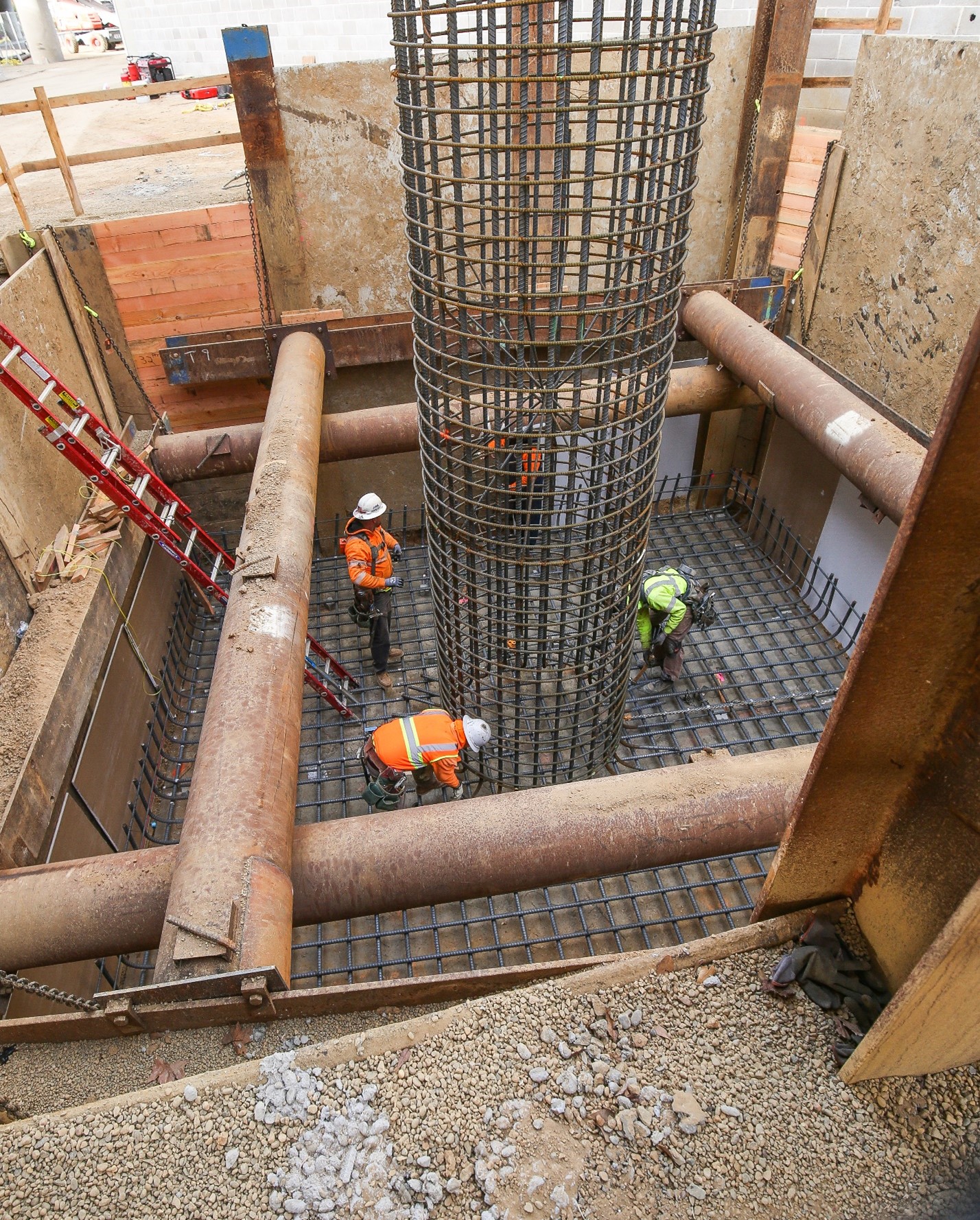 In the scope of work, 11 bridges are being widened and seven underpasses are being lowered.

As more truck traffic has traveled the US-50 corridor over the past decade, “high-load hits” have become more frequent due to deficient vertical clearance at seven overcrossing structures. To solve this safety issue and improve freight mobility, the highway is being lowered at seven overpasses to increase the overhead clearance. Those overcrossings are at Alhambra Boulevard, 48th, 51st, and 59th Streets, the 59th Street off-ramp overcrossing, Howe Avenue, and Occidental Drive. 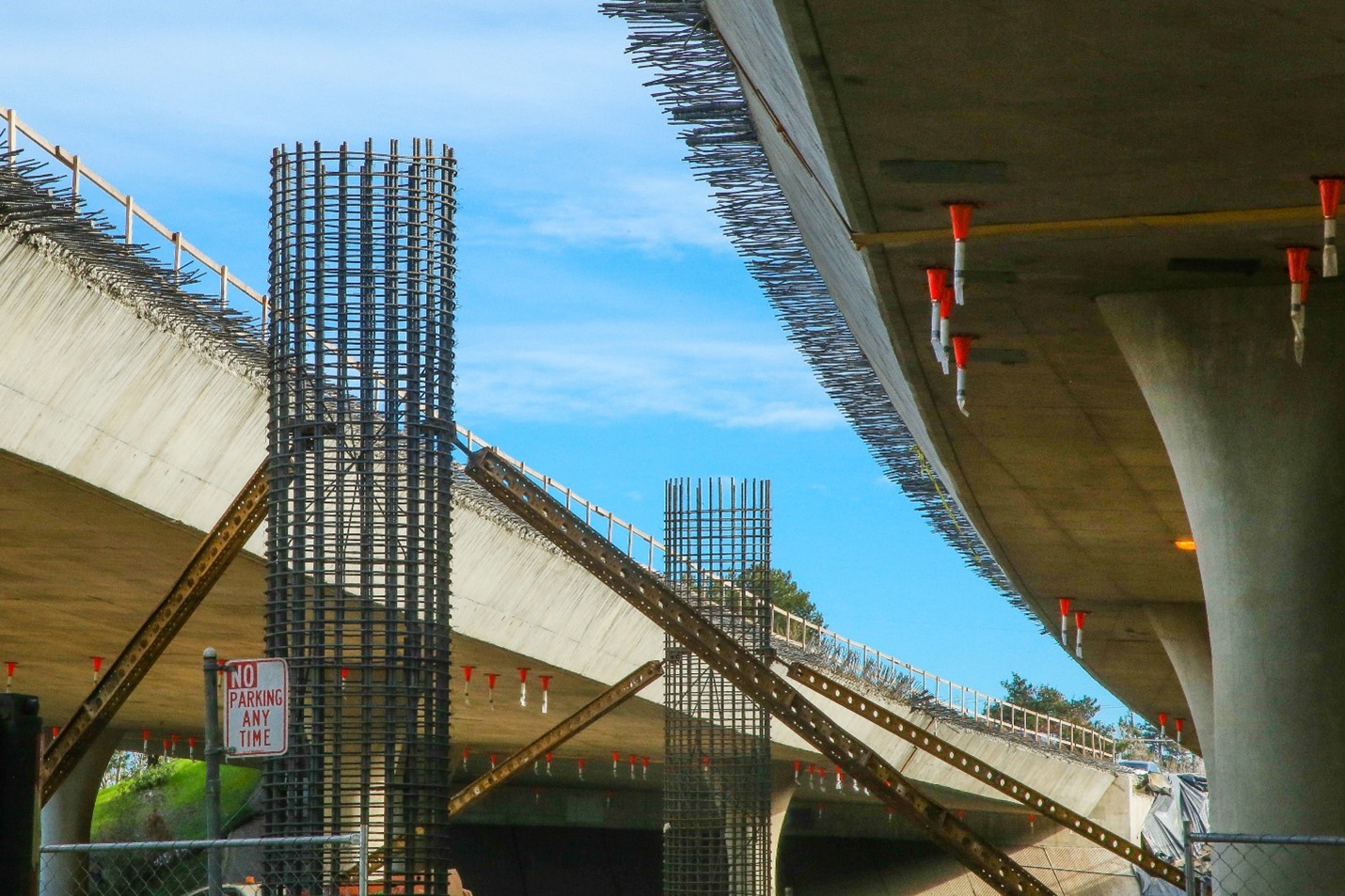 As the project runs through several Sacramento neighborhoods and adjacent to operating businesses, Flatiron has proactively reached out to the community. Project Manager Robert Ferrouge stated, “Community outreach is very important. We’ve communicated a great deal with our residential neighbors and business associates to let them know how the work is progressing to give them an understanding of the project.”

Along with three miles of soil nail retaining walls to accommodate the widening of US-50, Flatiron is building sound walls to mitigate the freeway noise. The sound walls are eight to 14 feet high and total 10,400 feet in length. To enhance the aesthetic of the walls, masonry is being applied and will be enhanced with artwork and mosaic color patterns, unique to each neighborhood. Response from the community has been positive. 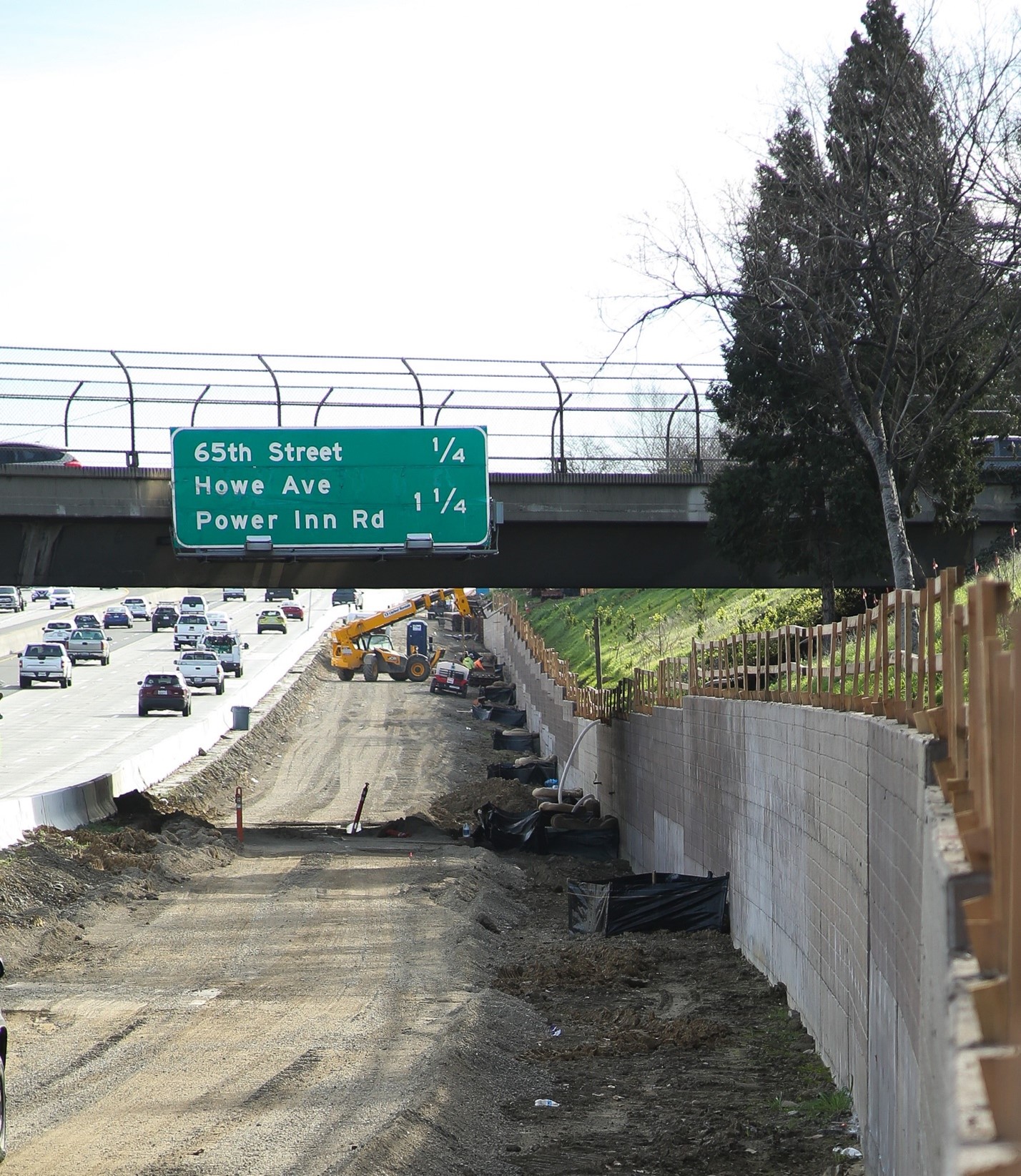 To create higher clearance, the grade is being lowered at the 59th Street undercrossing, and new soil nail retaining walls are being built to accommodate the widened freeway expansion. Photo courtesy of Flatiron.

Flatiron is working with subcontractors Drill Tech, Cal-Tex Masonry, Selby Soil and Erosion Control, and Pacific Coast Drilling in the construction of the retaining and sound walls. Other subcontractors that Flatiron has brought in on the project include Martinez Steel, Tennyson Electric, Coral Construction Signs, Vanguard, and Teichert Construction. 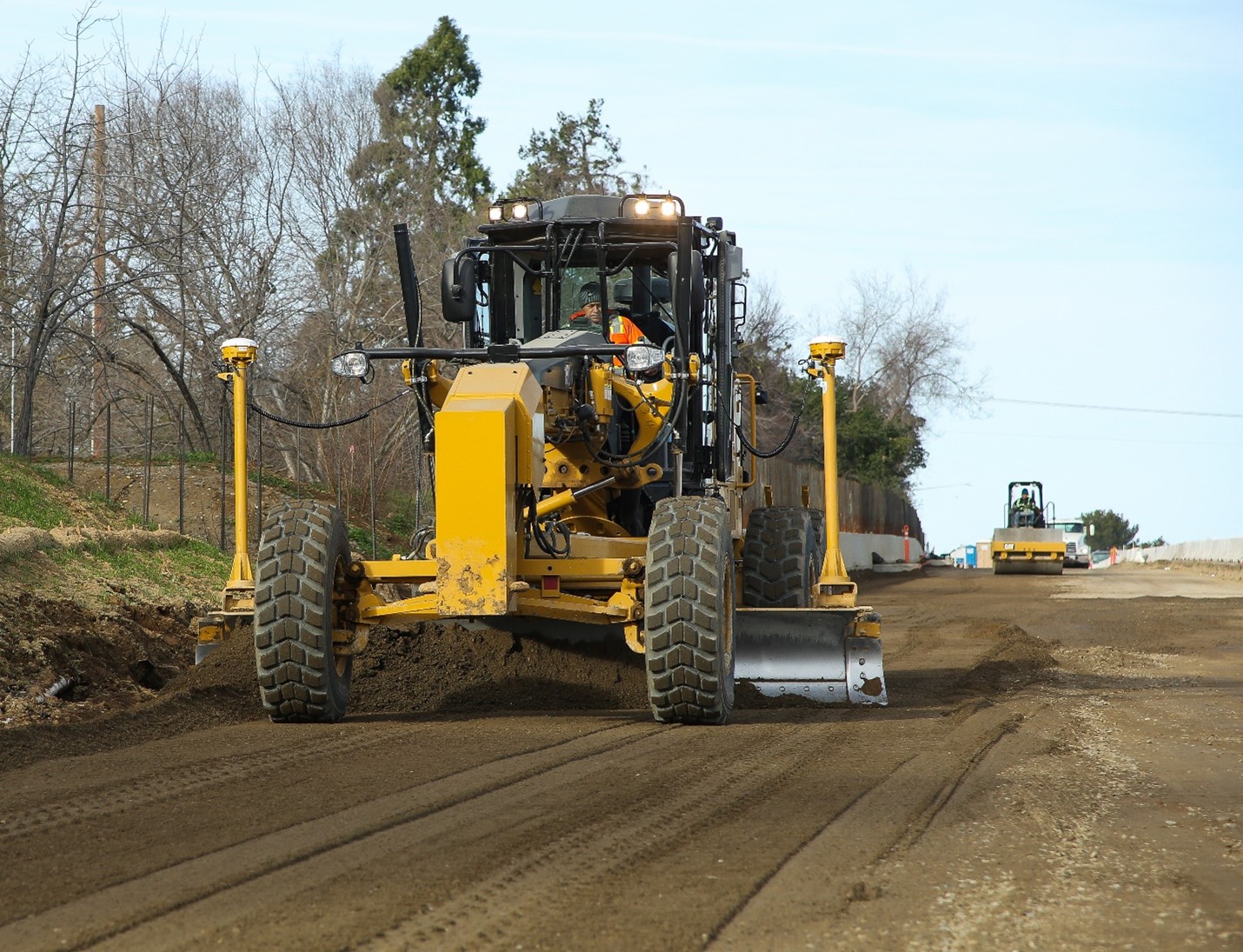 The Flatiron crew grades a newly widened section of the US-50 project. Photo courtesy of Flatiron.

A not-often-thought-of component of freeway and bridge expansion work is the removal of the existing trusses and signage that span the roadway over active traffic lanes. Extensive planning is required, according to Flatiron Project Manager Robert Ferrouge. “On this aspect of the project, our crews are working from 10 pm to 5 am to minimize traffic disruption and ensure the safest environment,” Ferrouge said. “For the truss removal, we needed to confirm the weight load of the overpasses and determine optimum positioning in order to safely bring the cranes in and efficiently lift the old signage. Hour by hour, as the removal is done successfully, it’s exhilarating. There’s a lot of pride and satisfaction in this process and throughout all of the work that our crews are performing on this project.”

This same effort will be required when the trusses are replaced with new signs, toward the end of the project.

With a projected completion in late 2024, Flatiron’s work on US-50 is progressing smoothly, safely, and swiftly, with some portions, to date, even finishing early.