In 2006, the Santa Barbara County Association of Governments (SBCAG) and Caltrans approved 101 in Motion, a multi-agency plan to reduce traffic congestion by adding carpool lanes to Highway 101, along with adding a peak-hour commuter train from Oxnard/Ventura to Santa Barbara/Goleta.

In 2008, nearly 80% of Santa Barbara County voters approved a one-half-cent sales tax to partially fund the improvements. Then with the state and federal funding components in place, construction began in that year.

Sustainable Concrete is the Choice!

Over the years, many local residents have asked that freeway improvements be constructed out of concrete due to the longer lifespan and reduced maintenance. On all phases of the Highway 101: Santa Barbara to Mussel Shoals Project, new Continuously Reinforced Concrete Pavement (CRCP) will achieve that. CRCP creates a smoother and quieter roadway surface compared to other pavements. It is also stronger and lasts longer, thereby greatly reducing the number of maintenance projects generated by potholes, cracks, and surface deterioration that occur more rapidly in other pavements.

Overall Scope of the Roadway Work

The entire scope of the project entails widening 16 scenic miles of Highway 101 along the coast, from Santa Barbara to Mussel Shoals. The four-phase project adds new carpool lanes, widens bridges, and addresses a narrow portion of 101 that has just two lanes in each direction. To date, three of the four phases have completed construction. Along with widening Highway 101 and adding six miles of HOV lanes, four major intersections have also been improved.

The first three phases were constructed in the traditional project delivery of Design-Bid-Build, with Security Paving Company building Phases 1 and 3, and Granite Construction building Phase 2. Phase 4 is currently being constructed by Granite.

From 2008 through 2012, Phase 1 of the project widened two miles of Highway 101 from Milpas to Hot Springs, widened Cabrillo Bridge, enhanced the Sycamore Creek bridges, built the Montecito Roundabout, and improved pedestrian and bike access. The total program cost was $96 million. 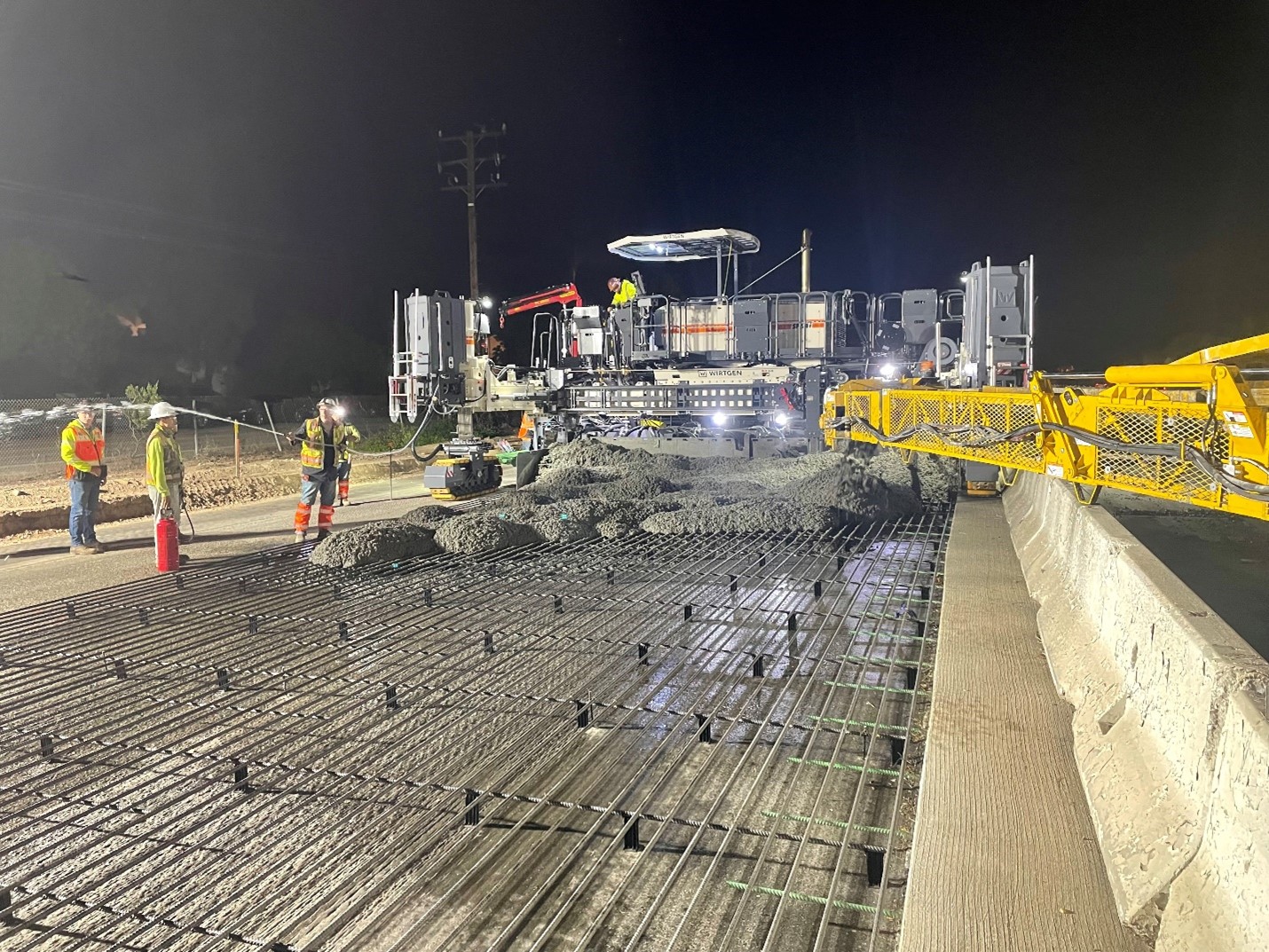 Phase 2 followed, running from 2012 through 2015. Six miles of Highway 101 from Mussel Shoals to Carpinteria were widened and carpool lanes were added in both directions, at a total program cost of $101 million. This phase also featured the creation of four miles of Class 1 bike lanes and the La Conchita Pedestrian Crossing.

In coordination with SBCAG and Caltrans, Granite Construction reduced construction truck trips – and is continuing to do so – by mixing concrete on-site at the North Padaro Interchange. Using an onsite plant reduces the miles that trucks need to travel carrying mixed concrete by an average of six to 16 miles per trip between Carpinteria and Summerland, versus transporting it from an off-site plant. This multiplies out to an average of 463,771 miles saved with another 137,684 miles anticipated to be saved for the Montecito and Santa Barbara segments. That means reduced fuel use, improved air quality, and reduced impacts to neighborhoods both inside and outside of the improvement area.

400,000 gallons of water are being saved through the use of on-site concrete production.

The old concrete pavement that’s removed from the roadway during construction is being recycled and then reused as roadway base. More than 250,000 tons of concrete will be recycled over the course of this project.

Overall, these logical, environmental measures will save taxpayers more than $10 million and reduce any negative environmental impacts.

Next Generation Concrete Surface (NGCS) will be applied to the surface of the pavement using diamond grinding equipment to make it as smooth and quiet as possible.

And in the design of the new roadway, Geogrid and fabric were included to reduce the depth of the structure section, which in turn reduced the depth of excavation and export of soil by more than 100,000 cubic yards. 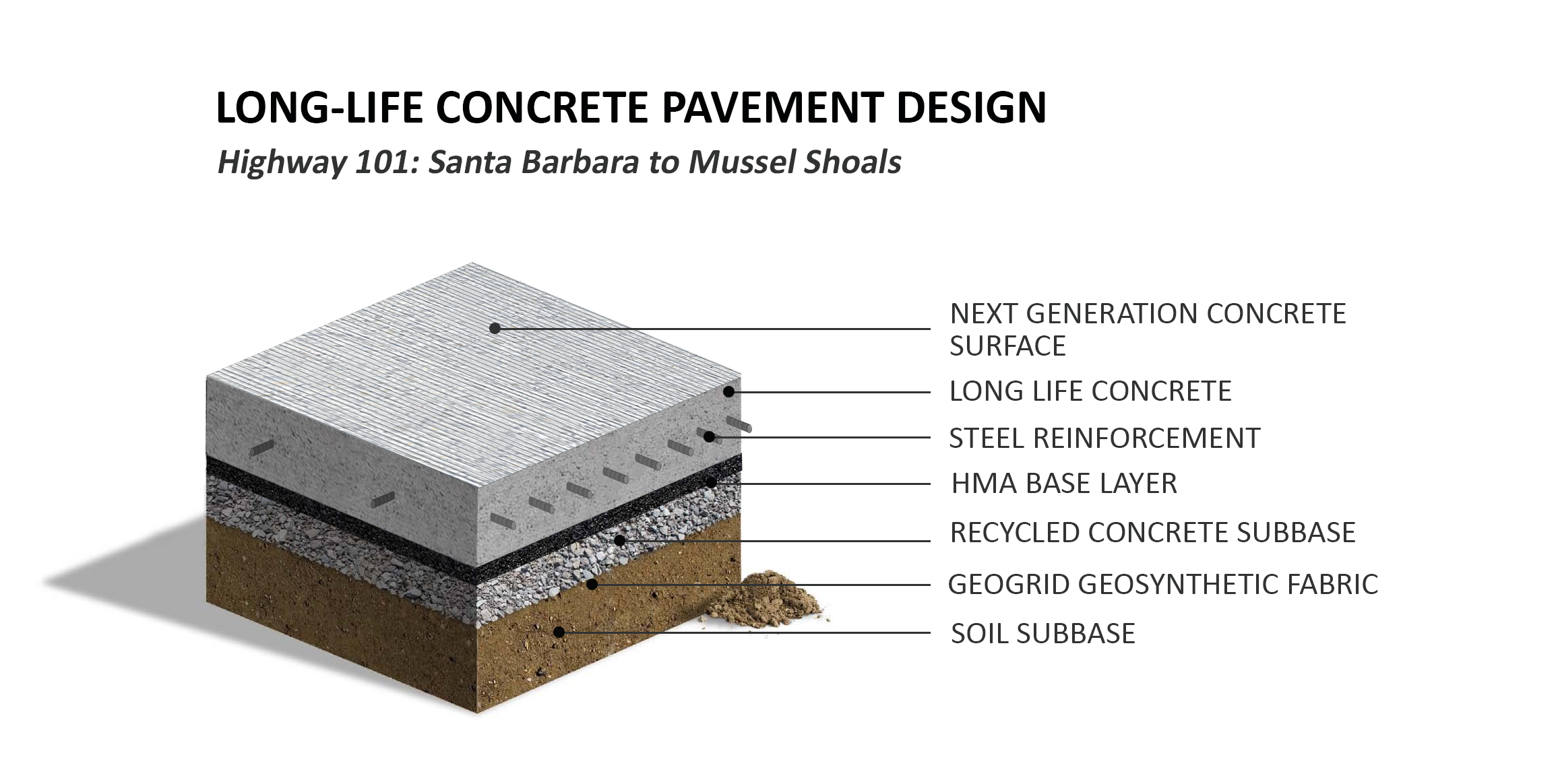 Granite Construction is building Phase 4 of the project, and due to a desire of Caltrans and local agency partners to accelerate the start of construction and shorten the overall duration of Phase 4, Granite is performing this final phase as Construction Manager/General Contractor (CMGC).

“The CM/GC process facilitates increased innovation and collaboration between Caltrans and Granite, which reduces construction duration, costs, and risk,” said Caltrans Acting SB 101 Corridor Manager David Emerson. “We are pleased to sustain our relationship with Granite on this multiyear project to improve our roads through increased funding from SB1.”

With a forecast construction cost of nearly $600 million for Phase 4, Granite is expanding 10.9 miles of 101 with wider lanes, the addition of carpool lanes and two new interchanges, rehabilitation of the existing lanes, and the construction of new sound walls and creek bridges. The project will also improve sight distance and enhance aesthetics throughout the corridor. As stated earlier, Granite’s local material facilities are supplying aggregates and concrete for the project.

Phase 4 presents some new and unique qualifications and challenges. To deal with these elements, Phase 4 was split up into five segments, as each segment goes through a separate jurisdiction with separate and distinct permitting. The five jurisdictions are the City of Carpinteria, County of Santa Barbara, Community of Summerland, Montecito, and the City of Santa Barbara. Along with five separate permitting processes, each jurisdiction has different funding sources with varying dates of availability.

Granite faced – and will continue to face – physical challenges in this project, according to John Van Lenten, Granite Construction Manager. “With 101 running through these communities along the coast, we’re working in a very space-constrained environment. There are no large areas available for staging or storage,” Van Lenten said. “Our batch plant and recycle areas are in very tight spaces.” 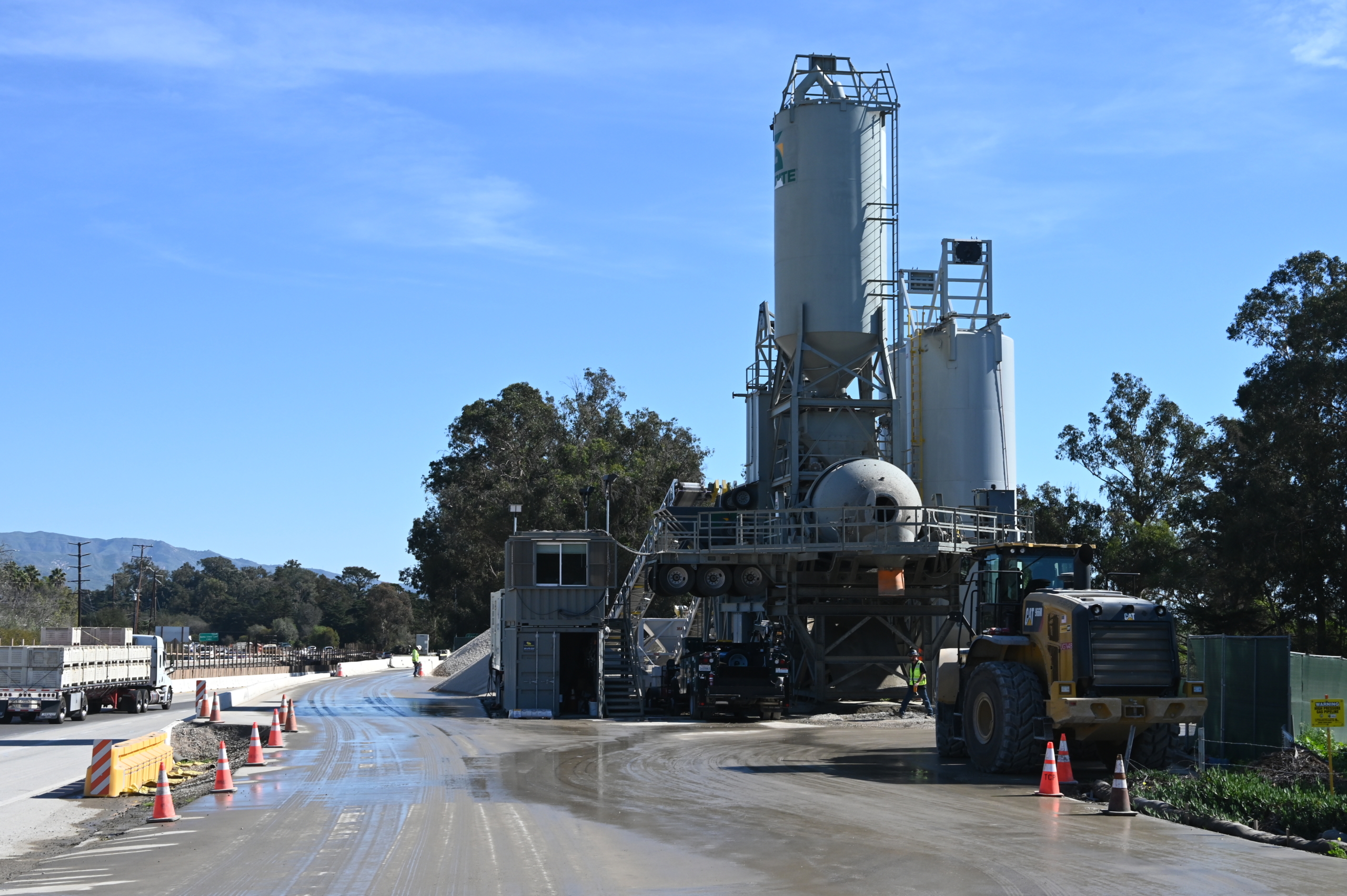 Granite Concrete Paving Manager Jon Hamilton agreed. “The greatest challenge has been access. The highway runs adjacent to homes and businesses, with very little space between the roadway and the structures. Sound walls were erected to mitigate the freeway noise, but that doesn’t solve the super-tight access issue,“ Hamilton stated. “There’s virtually no shoulder. Traffic during daytime hours is prohibitive, with gridlock in place during the morning and afternoon rush hours. With no real shoulder to allow equipment passage or staging, nearly all of the paving work has to be carried out at night.” 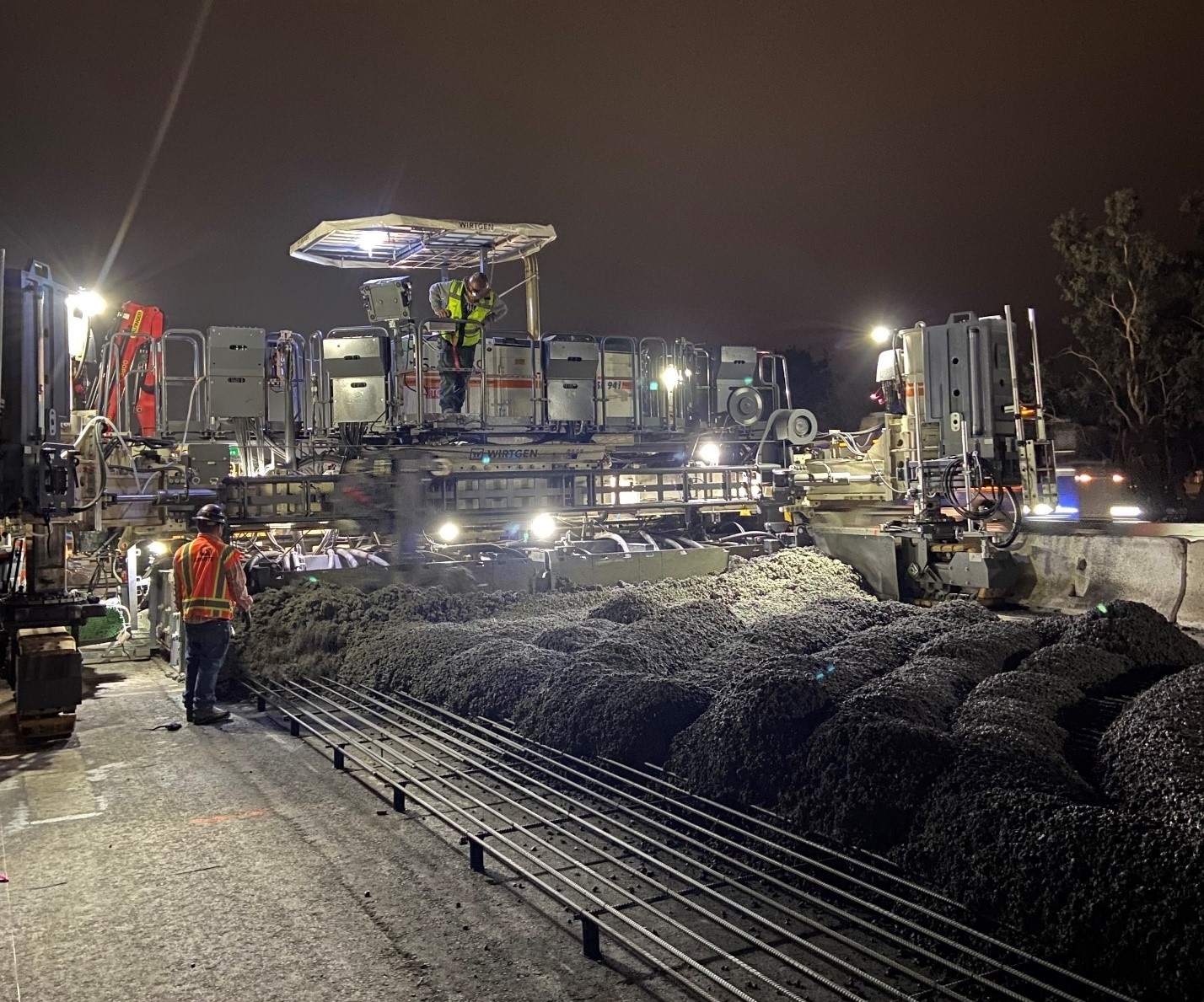 Heavy daytime traffic, minimal shoulders, and very tight access required most of the paving work on Highway 101 to be conducted at night.

“That all makes driving the critical schedule a primary focus of the job,” Hamilton emphasized. “The paving had to be done fast – and was, at the rate of 1,000 feet a day, six days a week.

“In addition,” Hamilton continued, “normal paving equipment couldn’t work within certain areas with restricted space, so some of the concrete had to be hand-poured, using Telebelts.”

“Staging integration between the three active segments presented its own set of challenges,” Van Lenten interjected. “They each started and will finish at different times. On- and off-ramps need to be kept open, with no two consecutive ramps closed at any one time. And traffic continuously needs to be shifted between the segments in order to get access to the next stage.

“With such tight constraints on the work areas,” Van Lenten continued, “extra attention was given to enable safe access for our crews and to create a safe motoring environment for the traveling public. One of the key safety measures is the installation of temporary K-rail on both sides of the freeway.”

Phase 4 also began at the same time in 2020 that Covid-19 hit. “There were impacts on our workforce, the supply chain, and traditional methods of collaboration such as in-person coordination meetings,” Van Lenten stated. “We had to step up and find innovative ways to keep the project moving forward, on schedule. We did, and we continue to do so.” 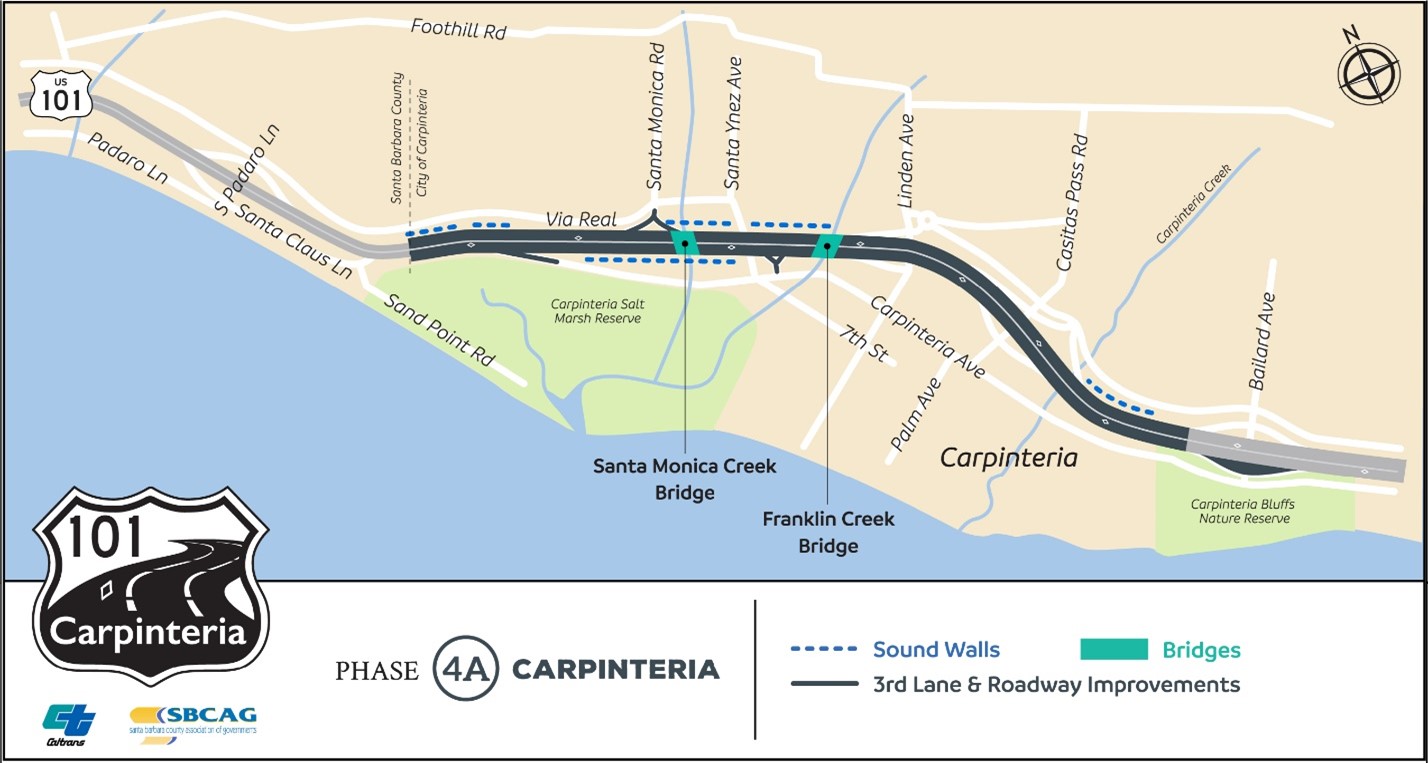 Segment 4A adds a peak-period carpool lane to the freeway in each direction, tying into the new third lanes to the south and upcoming projects to the north. New bridges have been built over Franklin and Santa Monica Creeks, and improvements have been made to the on- and off-ramps at Santa Monica Road, Carpinteria Avenue, and Reynolds Avenue. The scope of work on this segment included replacement of all drainage culverts and associated structures. Six new sound walls were constructed to reduce freeway noise for the residents, and three local intersections were improved as well. Work on this segment is scheduled to complete in the summer of 2022, followed by landscaping work covered in a separate contract. 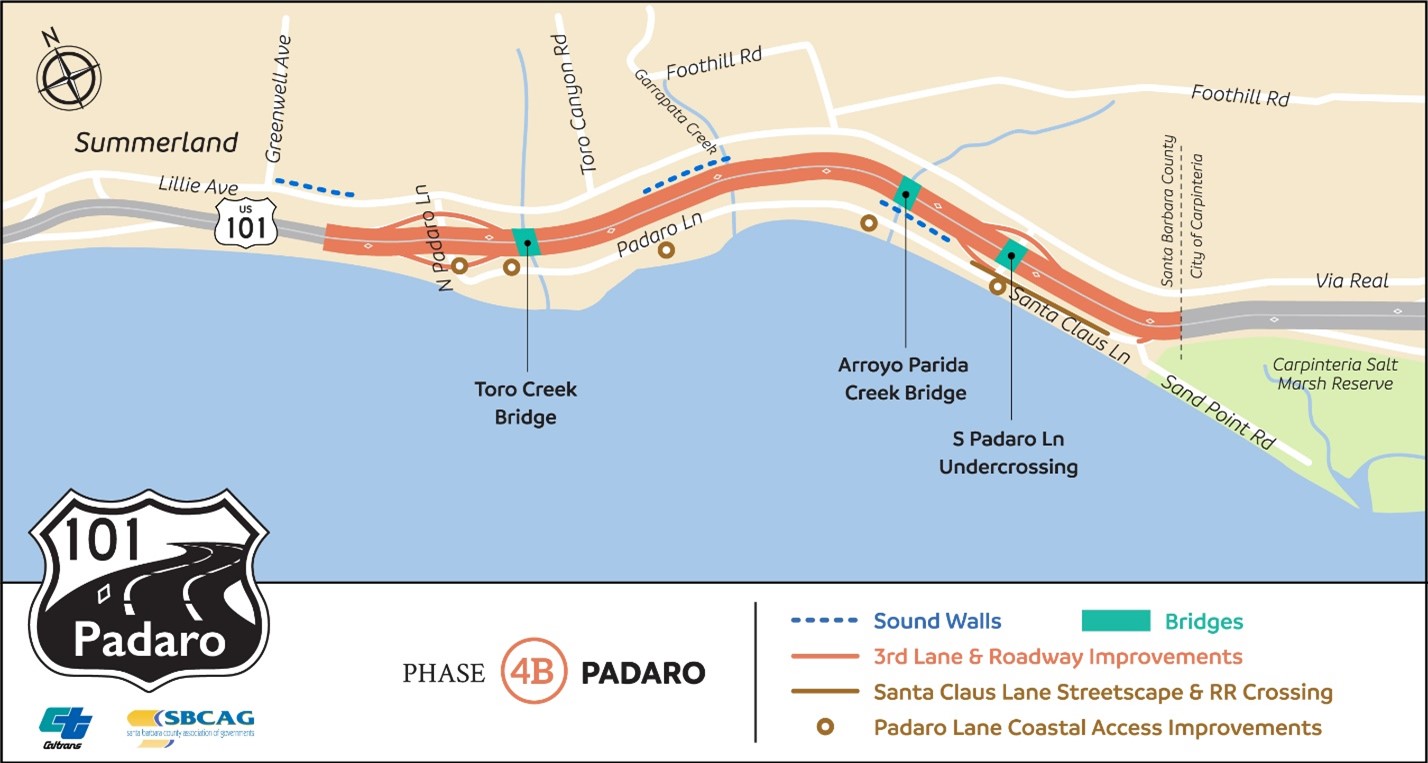 The scope of work on Segment 4B includes demolition of existing roadway, grading, and 65,990 cubic yards of CRCP. The scope includes replacement of all drainage culverts and associated structures. New retaining walls, sound walls, barrier rail, and bridge replacements over Toro and Arroyo Parida Creeks are also part of this portion of the project. The South Padaro/Santa Claus Lane Undercrossing will be reconstructed with a new clear-span bridge and new on- and off-ramps. This segment will also create a new HOV lane in each direction of the nearly four-mile segment and refine the curve geometry along the roadway, creating a safer motoring environment. Completion of 4B is slated for 2024. 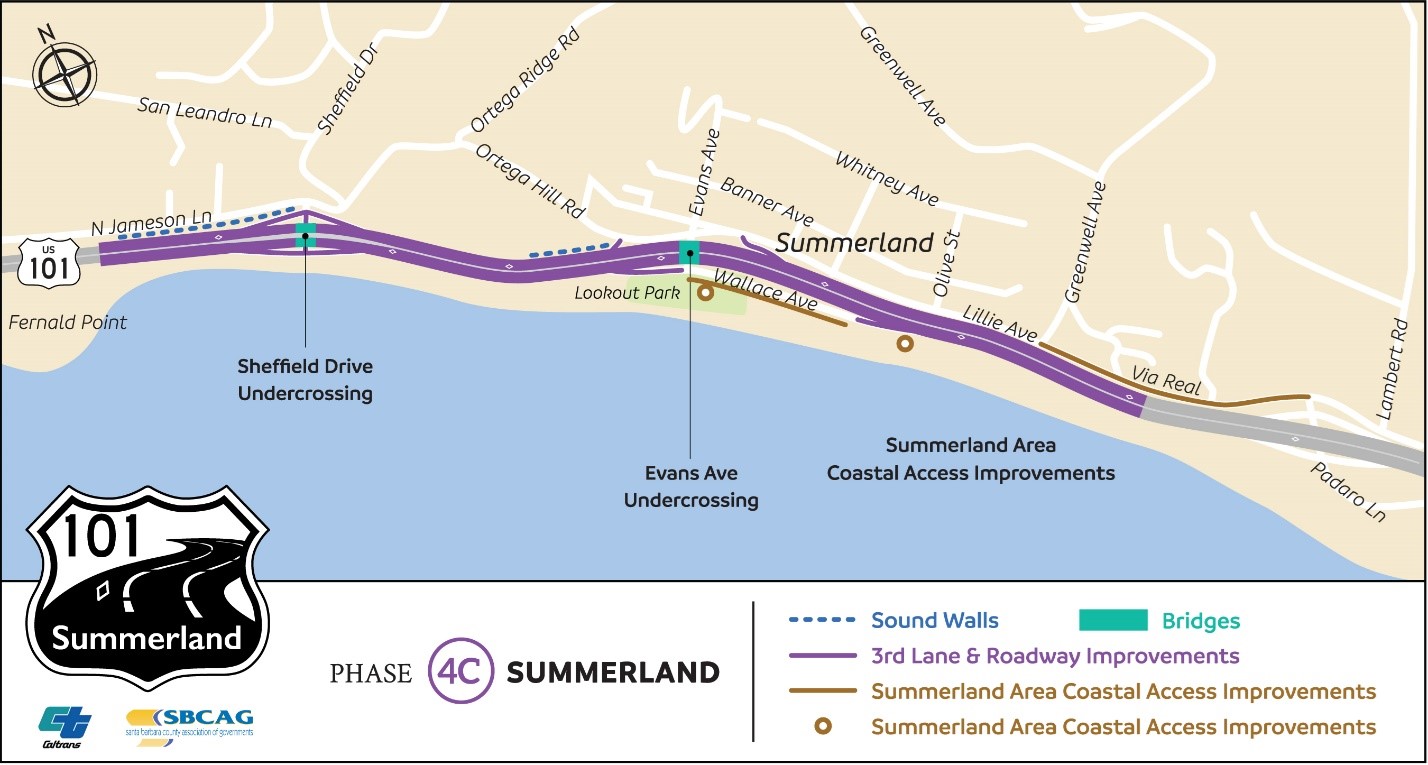 For Segment 4C, Granite is building new HOV lanes, and replacing all of the drainage culverts and associated structures, accompanied by improvements to pedestrian walkways, bike lanes, and lighting. 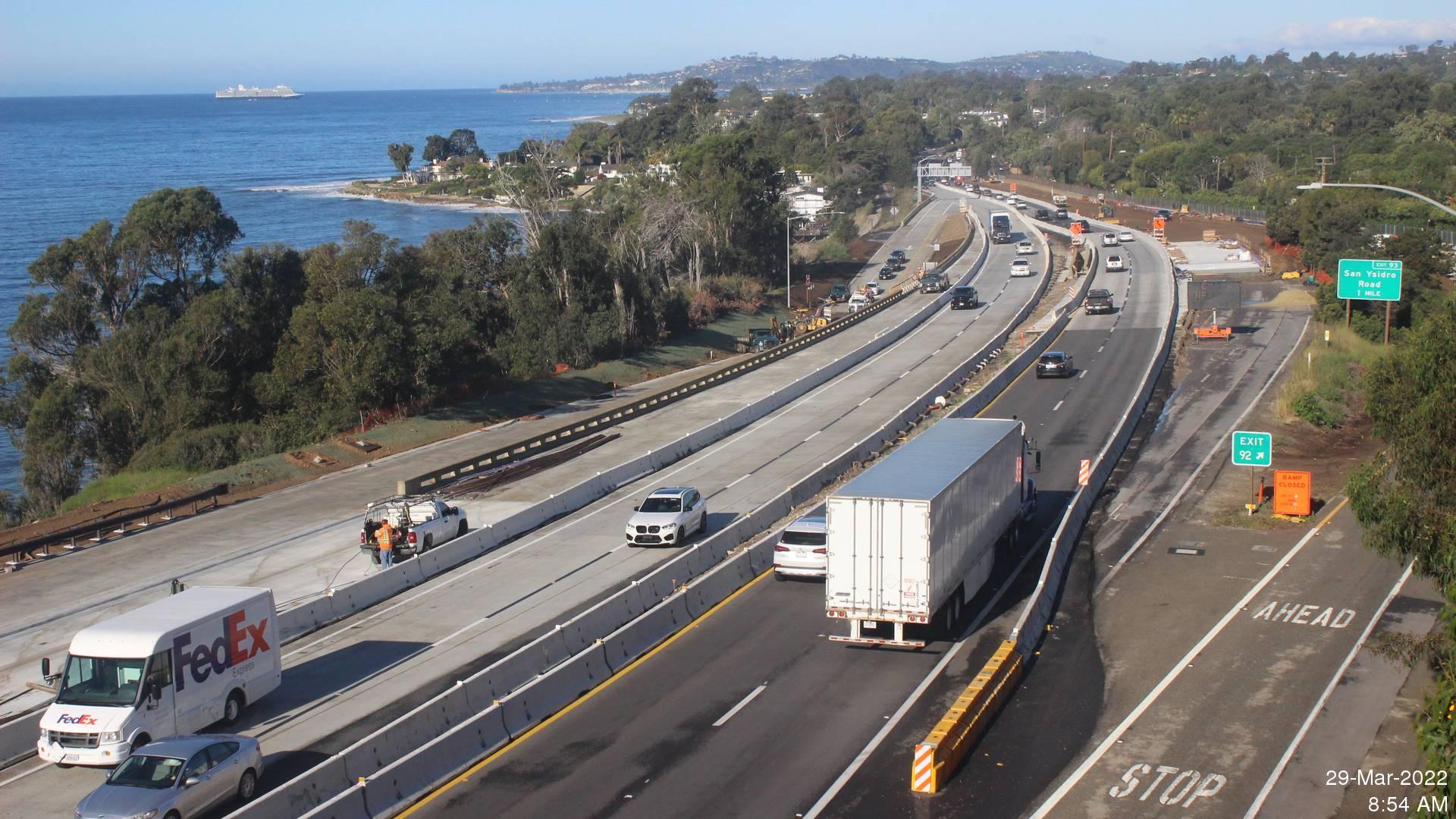 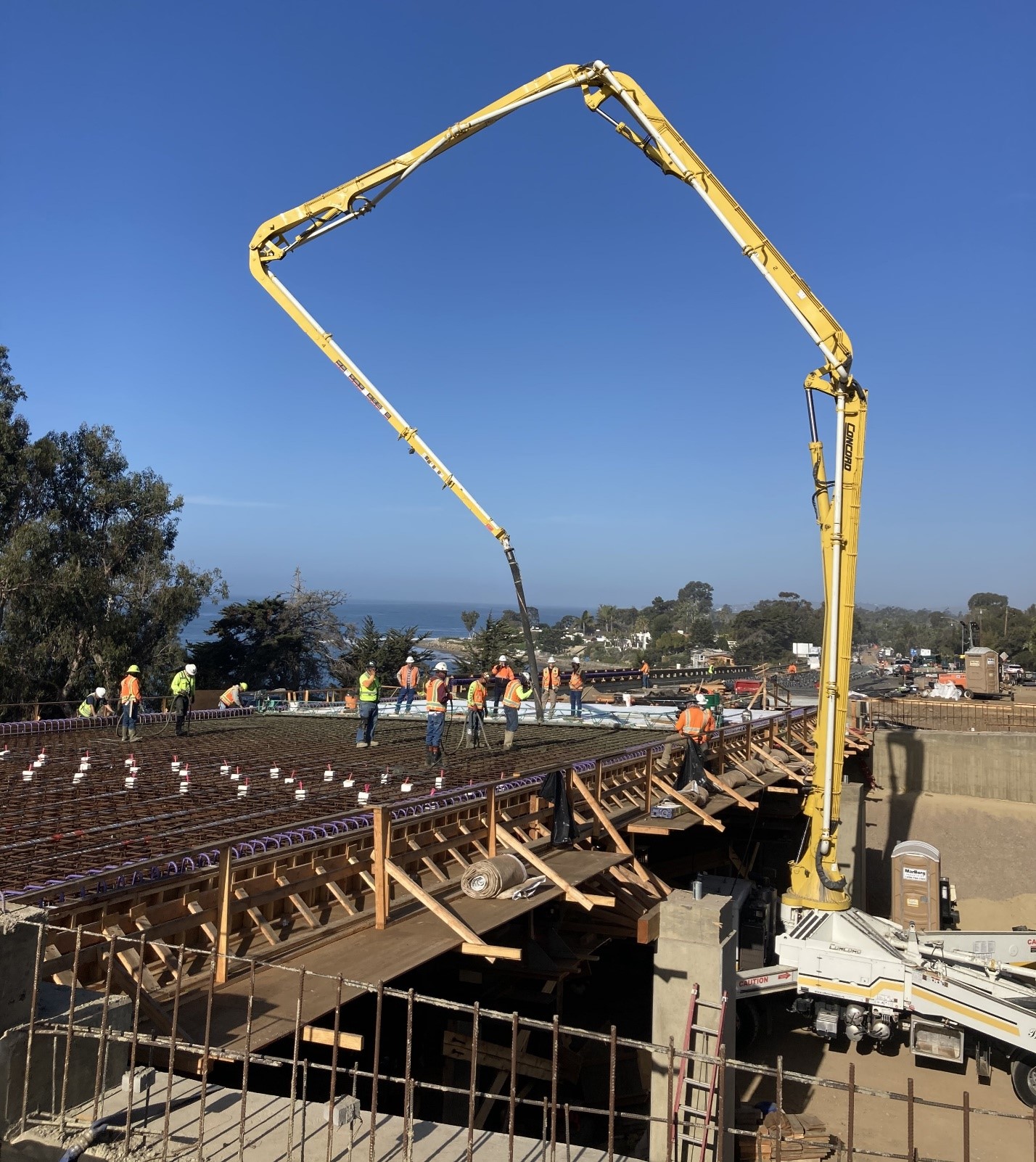 With the Pacific Ocean in the background and rebar configured on the Sheffield Bridge replacement, the concrete pour begins to take place. 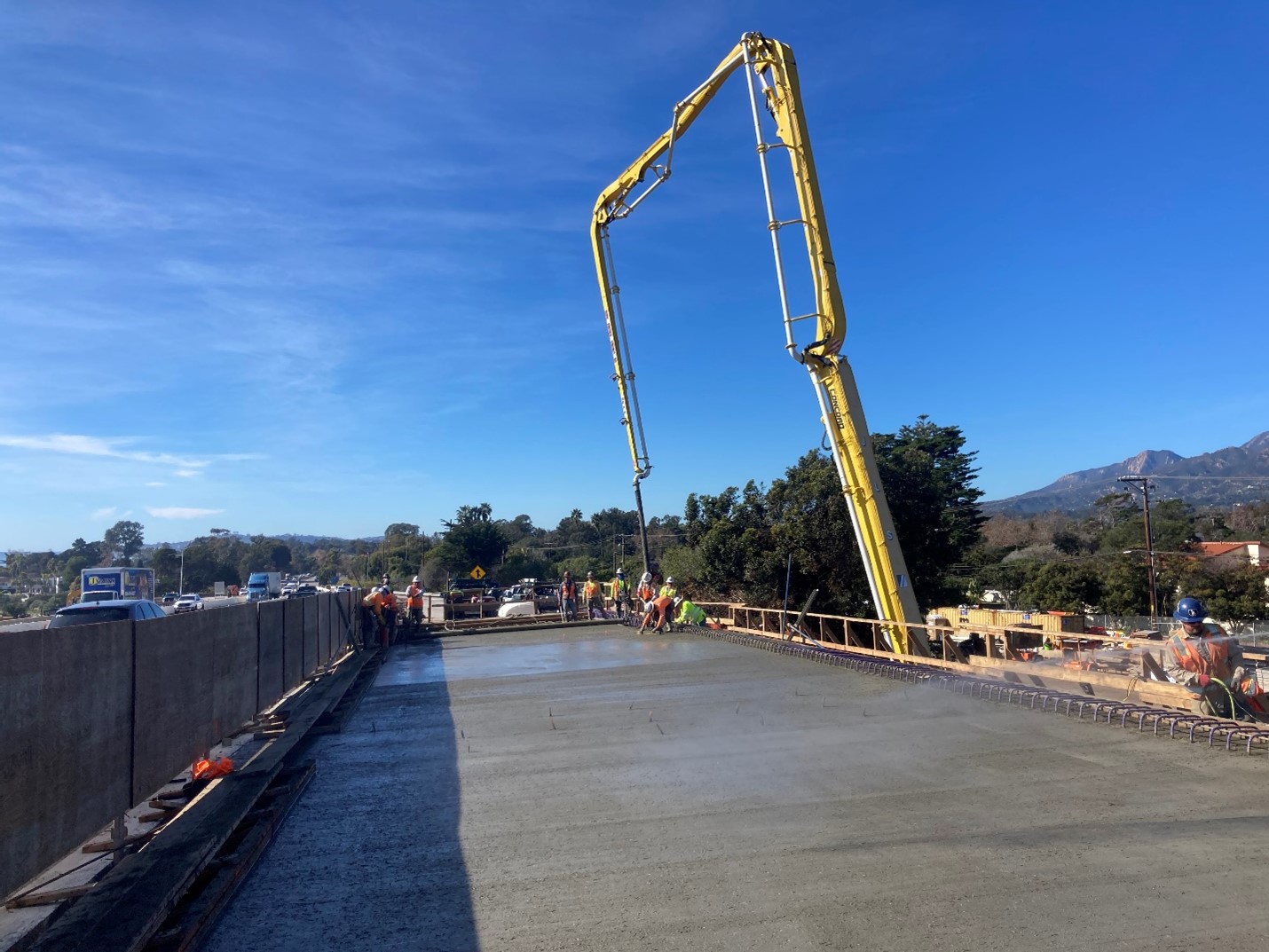 Finishing work refines the Sheffield Bridge replacement at the interchange in Summerland.

“Granite’s preconstruction team has worked hand-in-hand with Caltrans’ design team over the past 18 months to improve constructability and staging throughout this segment,” said Granite Regional Vice President Larry Camilleri. “We look forward to our continued partnership to deliver a complex project on time for Caltrans and the community of Santa Barbara County.” 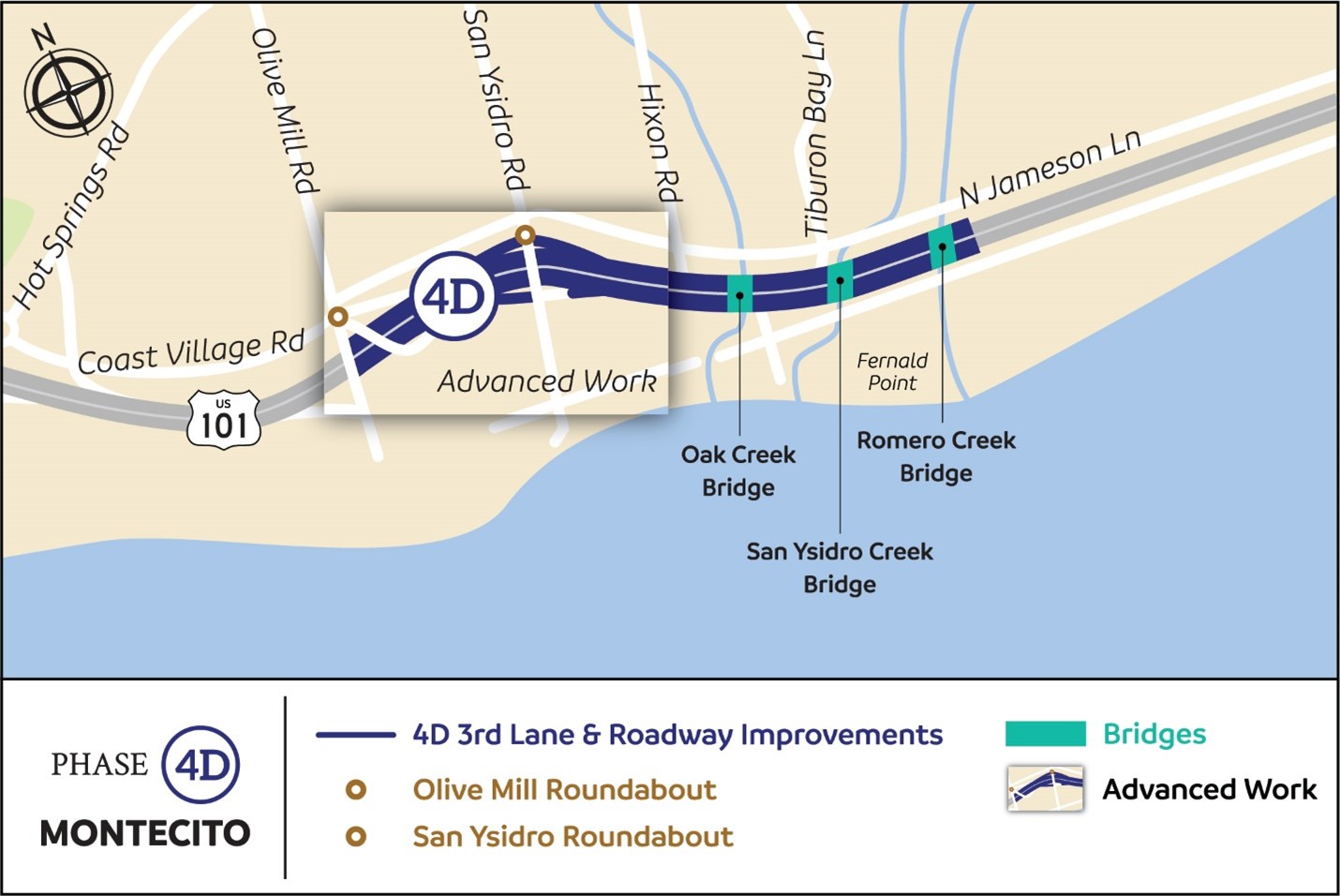 For this segment, Highway 101: Montecito, work is planned to begin in early 2023 to add new peak-period carpool lanes, and replace the bridges over Romero, San Ysidro, and Oak Creeks. Additional scope includes reconstruction of the on- and off-ramps at the Olive Mill and San Ysidro interchanges. 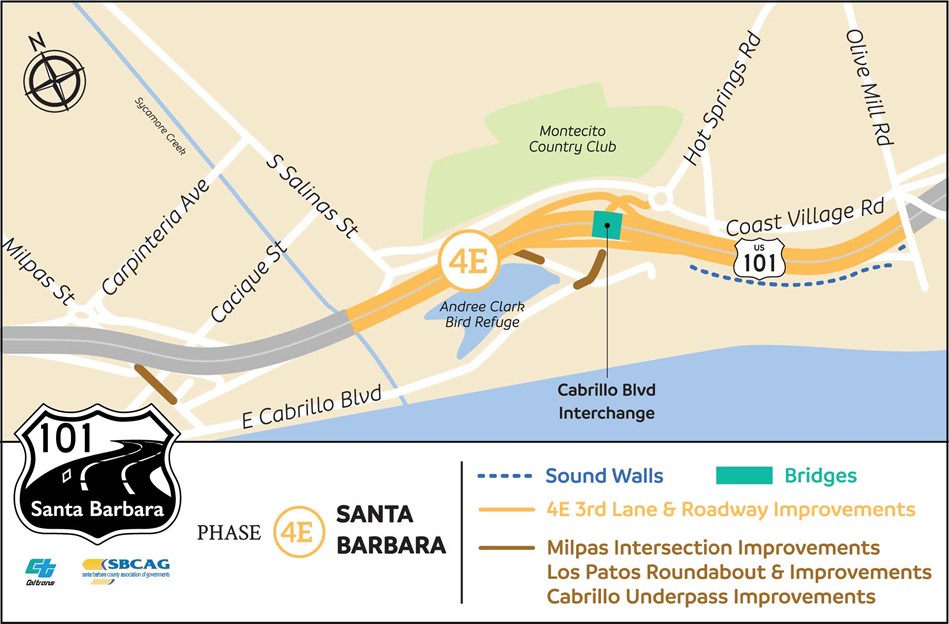 Phase 4E is the final section of the project and completes the Montecito to Santa Barbara portion of the work. This phase will expand Highway 101 to three lanes in each direction with the addition of peak-period HOV lanes. Extensive retaining wall work is included in this segment. Also within the scope of work is the rebuilding of the Cabrillo Boulevard Bridge and Interchange. In the design phase, operational and safety improvements are being added to enhance this stretch of Highway 101.

Funding is still being determined for this final segment. As it currently stands, projected completion for this last phase of Highway 101: Santa Barbara to Mussel Shoals is 2028.