Construction is currently underway on a $25-million project to reconstruct Taxiway L, the primary connector path for all departing commercial aircraft at Long Beach Airport (LGB). The project will align the airport with current FAA standards, and is primarily funded by grants from the Federal Aviation Administration.

Crews from Walsh Construction Company and its subcontractors began work during the first week of January on the project, with the work expected to last through August 2022.

The current runway project work that Walsh is performing includes replacing the existing asphalt pavement on Taxiway L, the main taxiway that allows departing aircraft to connect from the terminal to the runway and other aircraft facilities. Airport officials stated that the exiting asphalt pavement has reached the end of its useful life. The new concrete pavement that is being placed is designed to last 40 years.

In a move to make the new taxiway more environmentally sustainable, the asphalt millings from the demolition of the existing runway are being used as a base material for the new pavement section. This method will sharply reduce the number of dump truck trips required, and also reduce the amount of new aggregate material that needs to be produced. Both of these steps will reduce the carbon footprint of this project. The use of concrete pavement will further improve sustainability of the taxiway over the life of the pavement.

Additional sustainability elements in the runway reconstruction project include the replacement of all taxiway lights and signage with LED lights, which have much longer lifespans and lower energy consumption than the existing lights. New markings, stripings, and signage will also be installed.

Founded in 1923, Long Beach Airport is the oldest airport in California. The Airport prides itself in preserving its esteemed historical legacy and maintaining a safe, sustainable, and environmentally responsible operation. 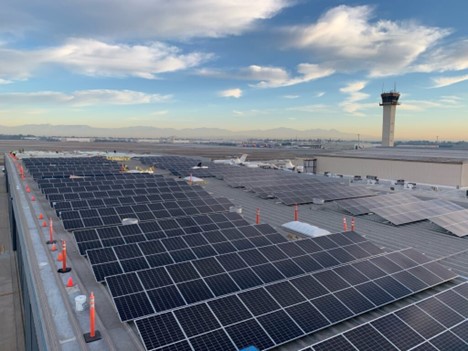 From January through October of last year, Long Beach Airport had approximately 7,000 commercial plane landings and 300 cargo aircraft landings, according to statistics compiled by airport officials. The LGB Aviation Complex encompasses 1,166 acres, has three runways, and is unique among municipal airports with its diverse portfolio of Class A office buildings, hotels, retail, and industrial facilities, plus a municipal golf course. Annually, LGB generates $8.6 billion in economic impact, supporting 46,000 jobs.