“The Main Street of California” Gets a Lift 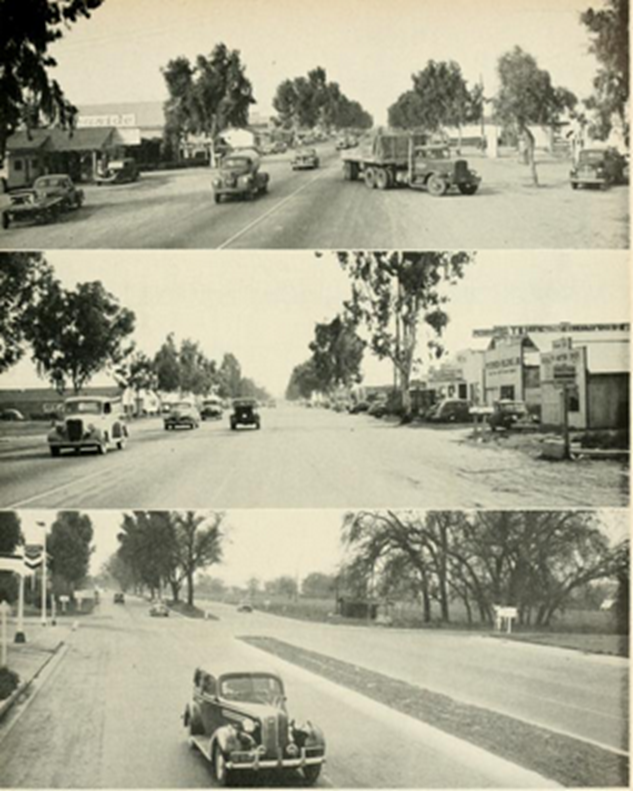 US 99 passed through the downtowns of every California city between the Mexican border and the Oregon state line.

Highway 99 is an important transportation route that stretches the entire length of the California’s Central Valley, from its southern end at the juncture with I-5, just north of the Grapevine, all the way up to Red Bluff where it reconnects to Interstate 5.

It first became a signed route in California in 1928 following the creation of the US Highway System in late 1926. US 99, at that time, was known as “The Main Street of California” because it passed through the downtowns of every city between the Mexican border and the Oregon state line. US 99 was important throughout much of the 1930s as it was a route for Dust Bowl immigrant farm workers who traversed the state, working the fields and harvests.

Nationally decommissioned in 1972, becoming State Route 99, the highway has been upgraded as of January 2016 to a freeway with a minimum width of at least four lanes. Caltrans plans to further upgrade the entirety of SR 99 to a minimum of six lanes and also bring it into compliance with Interstate Highway standards, with plans for it to eventually become either Interstate 7 or Interstate 9.

One of the stretches where the highway has already been expanded to six lanes lies in the predominantly agricultural area of Merced County just north of Chowchilla. This section of Highway 99 was originally paved with asphalt, as was most of the roadway. After years of use, deterioration of the pavement surface began to take place. To remedy the problem, Continuously Reinforced Concrete Pavement (CRCP) was constructed as a replacement pavement to provide a smoother, longer-lasting solution.

The concrete pavement solved the problem and was holding up well, but after a decade of use, a surprising anomaly was discovered. On an approximately 104-foot stretch of the highway, 500 yards north of the weigh station outside of Chowchilla, a significant dip in the pavement developed. 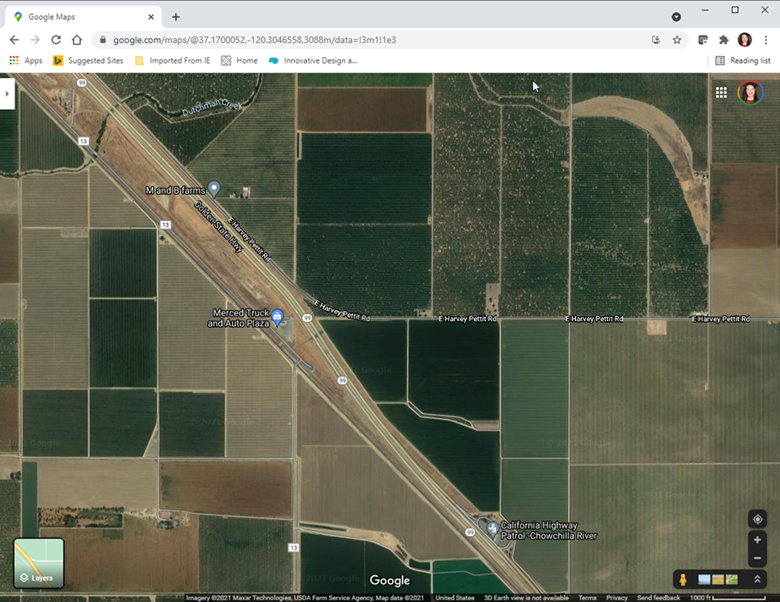 This stretch of Highway 99 in Merced County lies just north of the CHP Chowchilla weigh station.

Maintenance Manager II Jon Bevan spotted the roadway settlement and Caltrans sprang into action. After an investigation of the terrain below the roadway, no old pipes or culverts were discovered. They were now faced with the prospect of performing “open-CRCP surgery” to determine the underlying cause of the dip in the pavement in order to prepare for the subsequent stabilization of the ground beneath the highway. Then would come the repair work to rebuild the roadway; all very time-consuming and disruptive to traffic on SR 99. 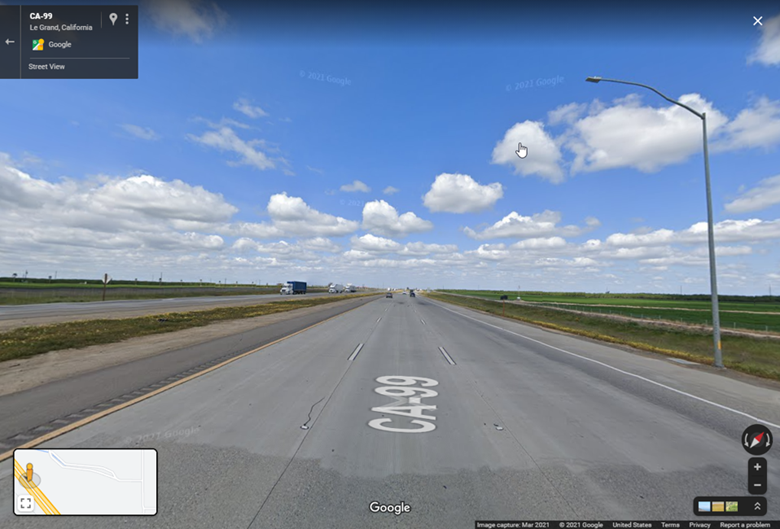 The affected stretch of Highway 99 can be identified in this Google image by the slightly darker pavement before the two vehicles at the top center of the roadway image.

This section of Highway 99 is within Caltrans District 10, and District Pavement Program Advisor Karen Bonnetti-Ramirez and Branch Chief Tanya Sanguinetti had an innovative solution up their sleeves that was less destructive than “open-CRCP surgery;” the injection of structural polymer material into the base and subgrade soils.

This technique is championed by URETEK, a national company, founded in 1989, that has preserved and rehabilitated more than 50,000 miles of pavement using advanced technology, unique chemistry, and inventive techniques to stabilize soil, mitigate roadway settlement, and, when required, lift the pavement. 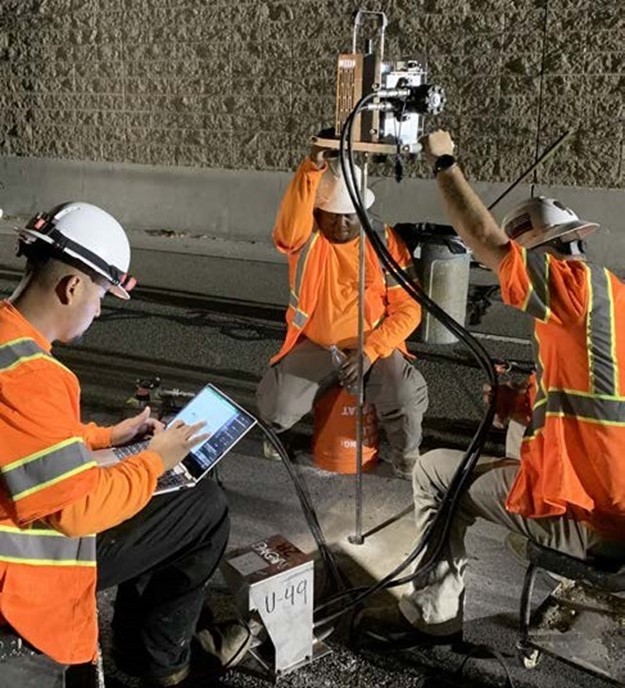 Pavement Preservation Specialties, Inc. and URETEK had earlier made a presentation to Caltrans, and a demonstration project was performed on an 8-foot by 80-foot section of roadway at the SR 91 and 241 Tollway connector in District 12 in Orange County, which proved to be successful.

Once the project was awarded to Pavement Preservation Specialties, Inc. under the Emergency Limited Bid (ELB) process, the Caltrans team began working with Nancy Davis, prime contractor, and John Schmidt, Project Manager at URETEK, and Caltrans set out to definitively learn what was causing the dip in the pavement.

Caltrans engineers and the URETEK research crew set up at the project site and performed Dynamic Cone Penetrometer (DCP) testing, which measures the comparative strength of the base soil layers beneath the road. The test results determined that weak soils contributed to flexing of the pavement under the immense weight of the repetitive loading and unloading.

URETEK engineers evaluated the results and concluded that using their 486 Star polymer in multiple locations at varying depths would not only stabilize the ground beneath the affected section of Highway 99, but also raise it to its original level. The DCP test results identified the exact locations and required levels for the injections.

In order to provide a stabilized ground base and prevent future settlement, structural polymer injections were required at two-foot, four-foot, eight-foot, and 12-foot depths throughout the area beneath the pavement. With the plan in place, work began.

The full scope of this project encompasses an approximately 104-foot stretch of Highway 99, which includes all six traffic lanes, three northbound and three southbound, both shoulders, and six feet of unpaved ground on either side to ensure that no further adjacent settlement would impact the level of the shoulders. Of note, the number three northbound lane is 16 feet wide and serves as the merge lane from the CHP weigh station. 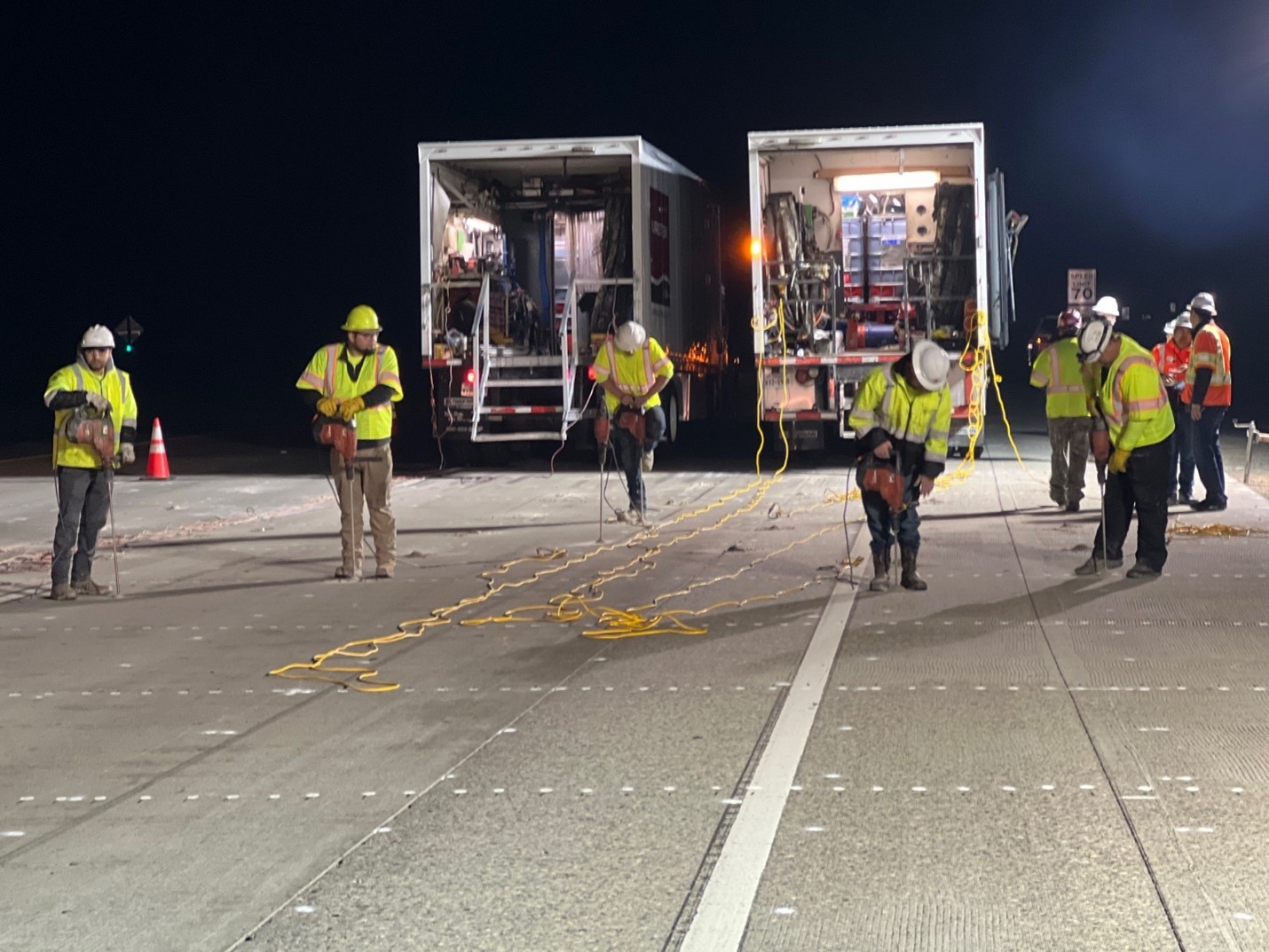 To minimize disruption to traffic with the lane closures, the Pavement Preservation Specialties, Inc. crews perform all of the work at night. The Highway 99 project started on northbound lanes two and three, keeping lane one open for through traffic. 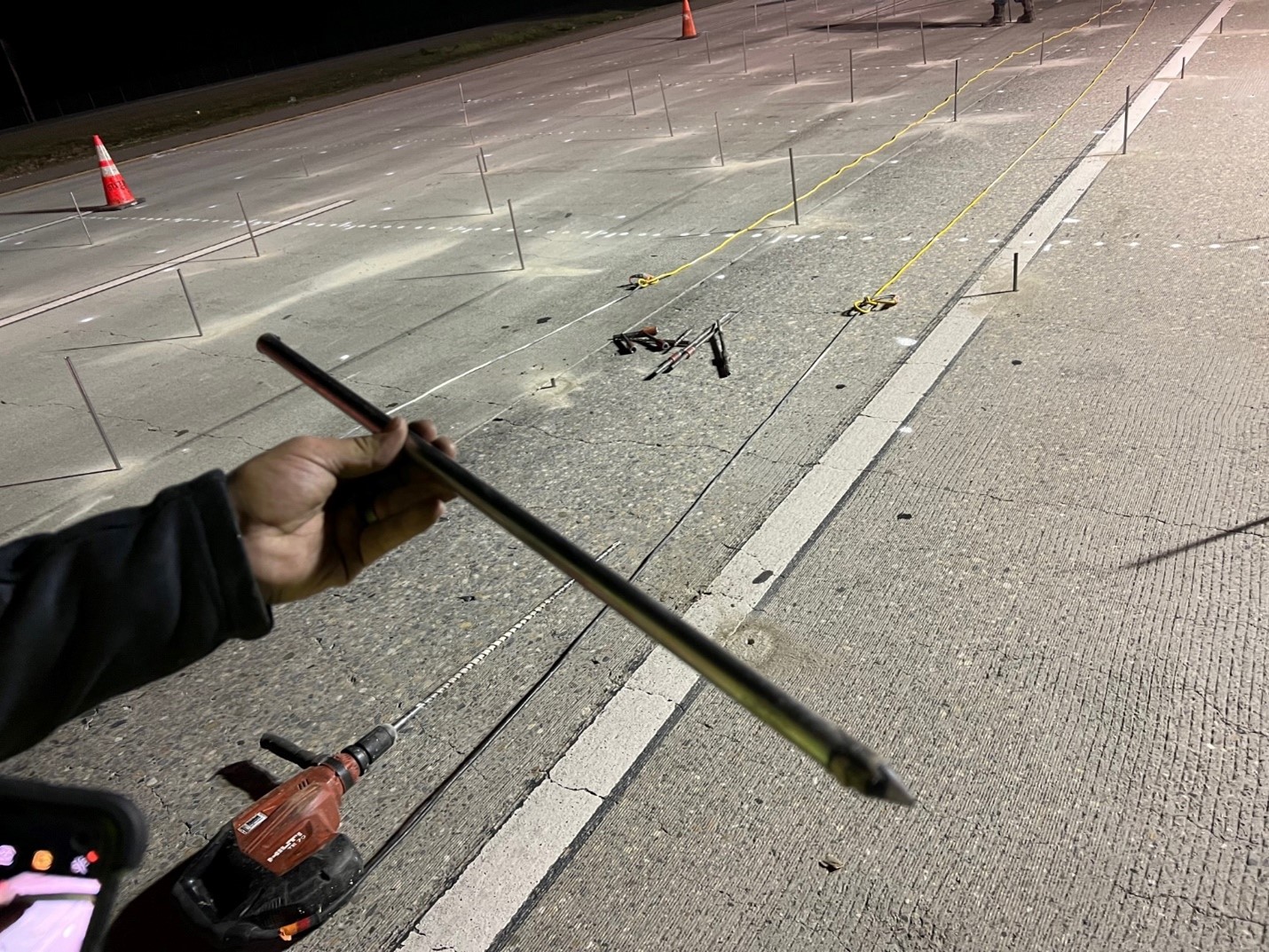 One of the structural polymer injection tubes is shown, with the array in place in the background. Photo by Dulce Rufino Feldman.

Using a flow meter to accurately measure the amount of material going through each tube, the Pavement Preservation Specialties crew injects the polymer into the ground beneath the highway.

Upon injection into the soil through the 5/8” tubes set at the prescribed depths, the polymer material expands, compacting the surrounding soils and applies a controlled pressure on targeted areas. The URETEK 486 Star polymer is a two-component, high-density, expanding thermoset polyurethane system, which reaches 90% of its full compressive and tensile strength within approximately 15 minutes. It’s environmentally inert, non-toxic, and resists underground water erosion or weakening thanks to its hydrophobic properties. 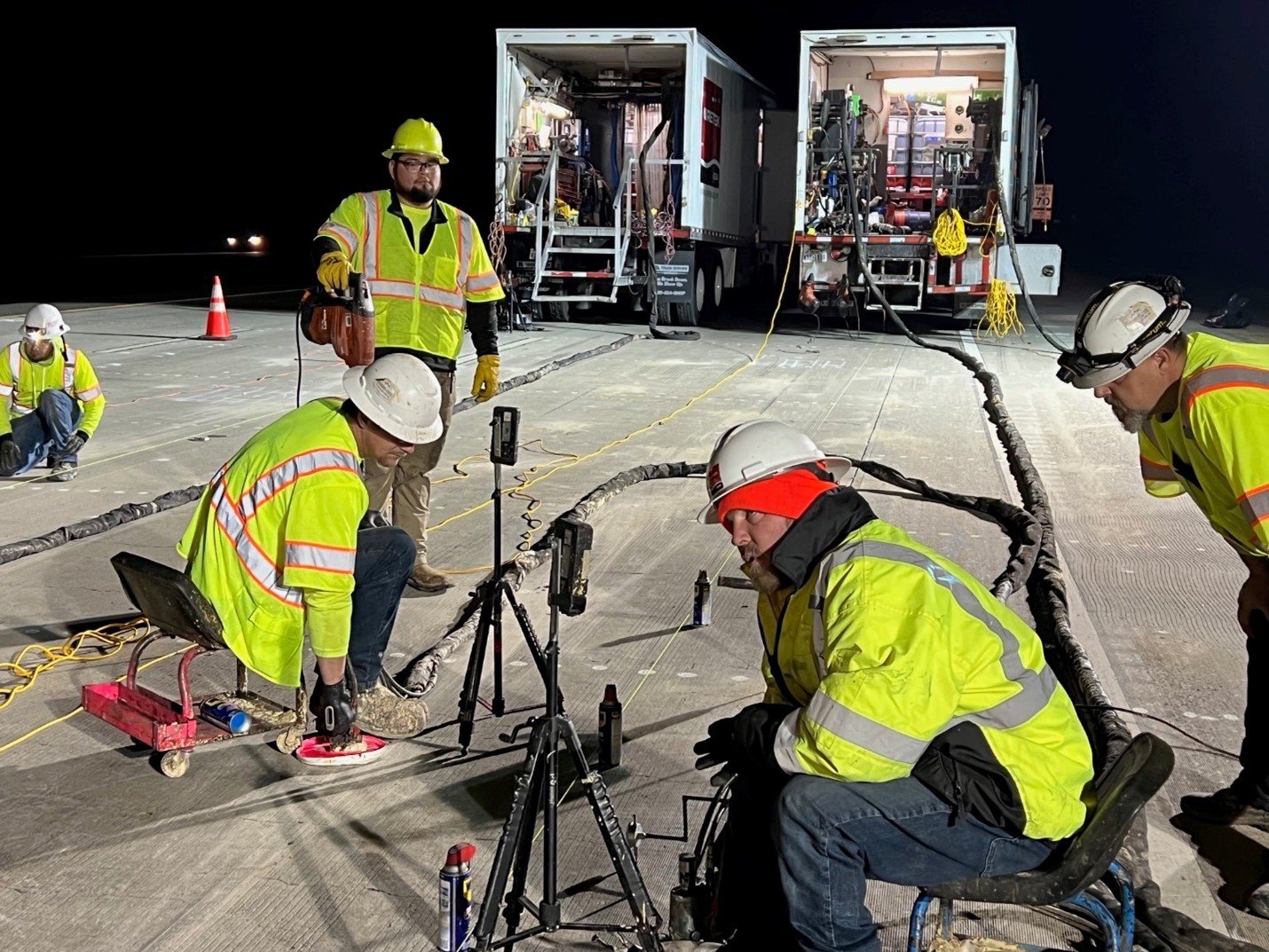 The Pavement Preservation Specialties crew monitors the injection flow of the polymer into the ground beneath the pavement. Photo by Dulce Rufino Feldman.

Progress to Date
At the time of publication, January 31st, the crew had successfully raised northbound lanes two and three 3 ½” without any cracking or damage to the CRCP. The raised level was verified by both laser and string measures. The schedule for completion of all of the work – three northbound and three southbound lanes, both shoulders, and six feet of unpaved ground on either side of the shoulders – is just four weeks, putting the tentative completion date at February 14th.

Faced with a potentially critical roadway condition that could severely impact a major throughfare for automobile and commercial truck transportation, Caltrans rose to the occasion. They wasted no time in tackling this emergency project, assembling an expert team who adroitly moved forward in the Emergency Limited Bid process and management of the roadway rehabilitation.

When the project is successfully completed, it will mark an efficient concrete pavement repair methodology that minimizes the impact on traffic on Highway 99 in Merced County and saves taxpayers a tremendous amount of money. A tip of the hard hat to Caltrans, Pavement Preservation Specialties, Inc., and URETEK for this rapidly responsive and innovative work.