Over the past four years, the Riverside County Transportation Commission (RCTC), in partnership with Caltrans and the Federal Highway Administration (FHWA) has been building the 15 Express Lanes Project to improve mobility along the I-15 corridor by reducing traffic congestion, expanding the express lanes network, and giving drivers a choice for travel-time savings and reliability. 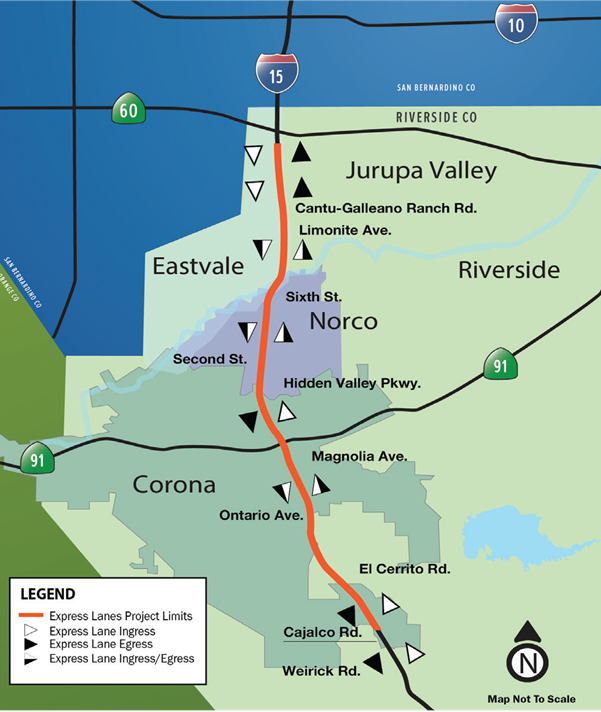 The $472-million 15 Express Lanes Project features two new express lanes on I-15 in both directions, from State Route 60 to Cajalco Road. The scope of this mega project also included the widening of 11 bridges, and the addition of six new sound walls. The express lanes were built within the existing median and now offer multiple entrance and exit points, including at least one in each city along the corridor. The 15-mile stretch of newly-laned highway goes through the cities of Corona, Norco, Eastvale, Jurupa Valley, and portions of unincorporated Riverside County. 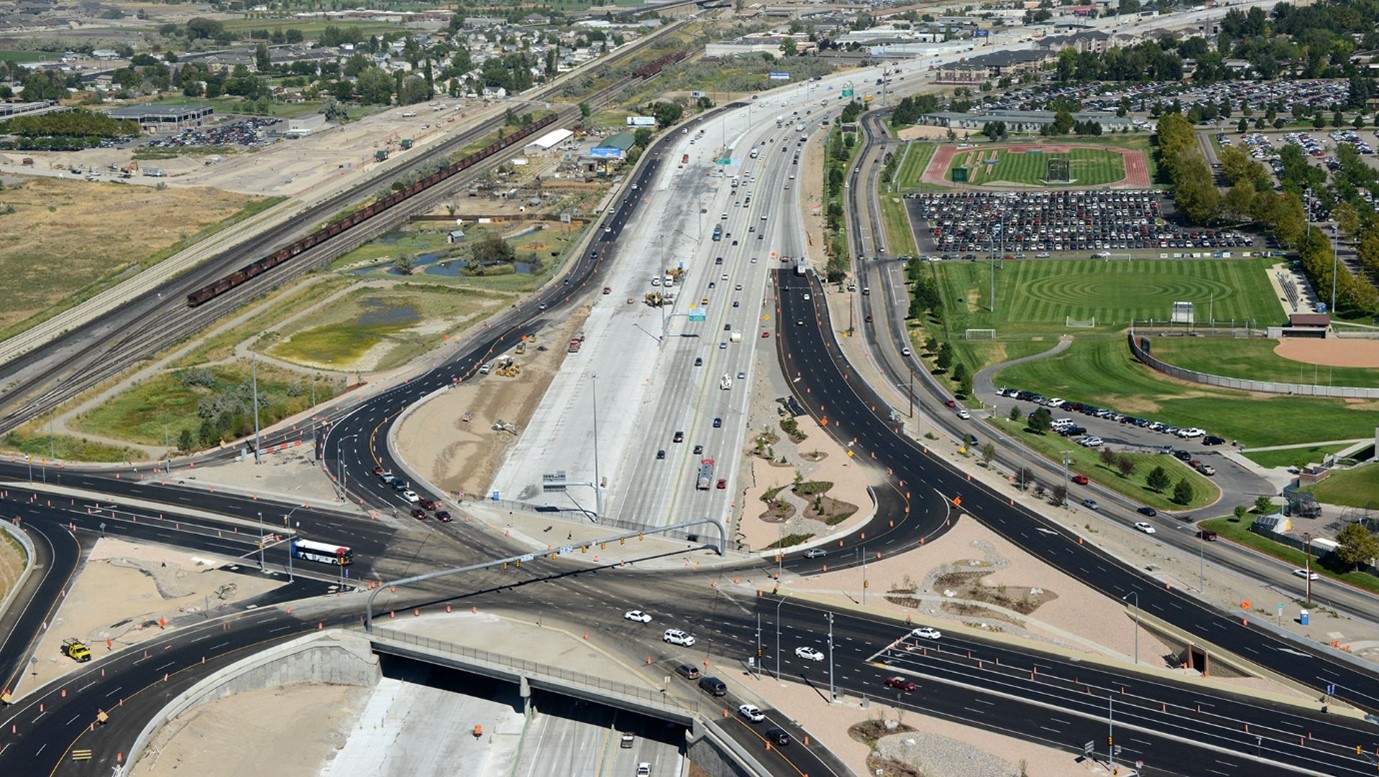 The crews at work placing new JPCP on the southbound lanes of I-15. Photo courtesy of Ames Construction.

“RCTC is excited to open these new lanes to provide another way to get to work, school, or recreational destinations,” said RCTC Chair and Palm Desert Mayor Pro Tem Jan Harnik. “We know that time is precious, and the express lanes offer convenience and reliable trip times for drivers,” she said.

Construction began in April 2018 and the RCTC used the design-build method to expedite project delivery. Skanska and Ames formed a joint venture to perform the work, with AZTEC handling the engineering. The scope of work on the project included the construction of a series of retaining and sound walls along the project corridor, 11 bridge widenings to accommodate the new express lanes, tie-ins to the existing travel lanes, storm water runoff treatment services, an electronic toll collection system, a customer service center, and a traffic management system. 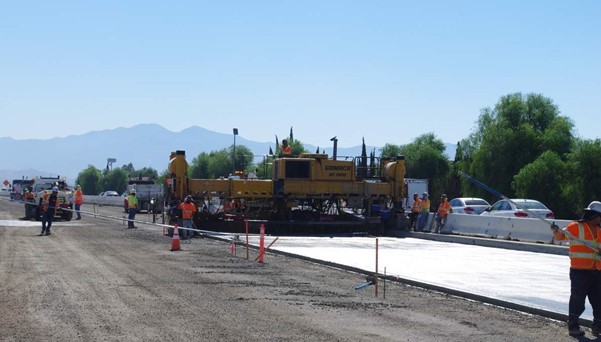 Four new Express Lanes, two in each direction, were added to the median of I-15. Photo courtesy of Security Paving Co.

Security Paving brought in a portable batch plant to ensure that quality was consistently maintained for the concrete that they placed on the project. Delivering the concrete from an onsite batch plant also enabled a reduction of the carbon footprint of their delivery trucks by minimizing the travel distance between the batch plant and where the concrete was placed. 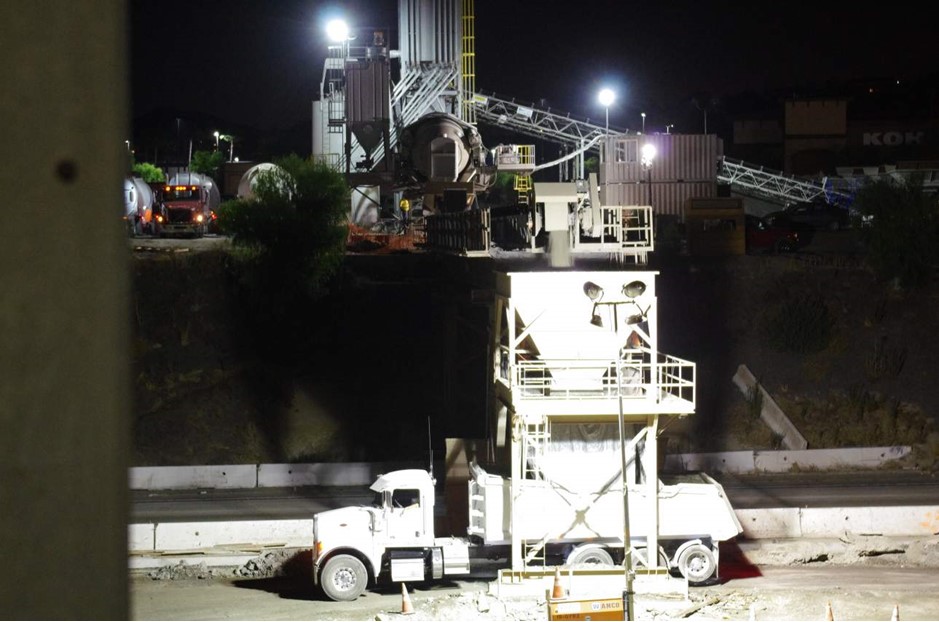 In addition to having the benefits of an onsite batch plant, Security Paving took it one innovative step further to create a brilliant delivery conveyance. Security built a falsework bridge over the northbound lanes of I-15 to support a conveyor belt that, in turn, transported the concrete from the batch plant on the side of the highway to the dump trucks that were parked in the median, waiting to drive the now-short distance to where the paving was taking place. 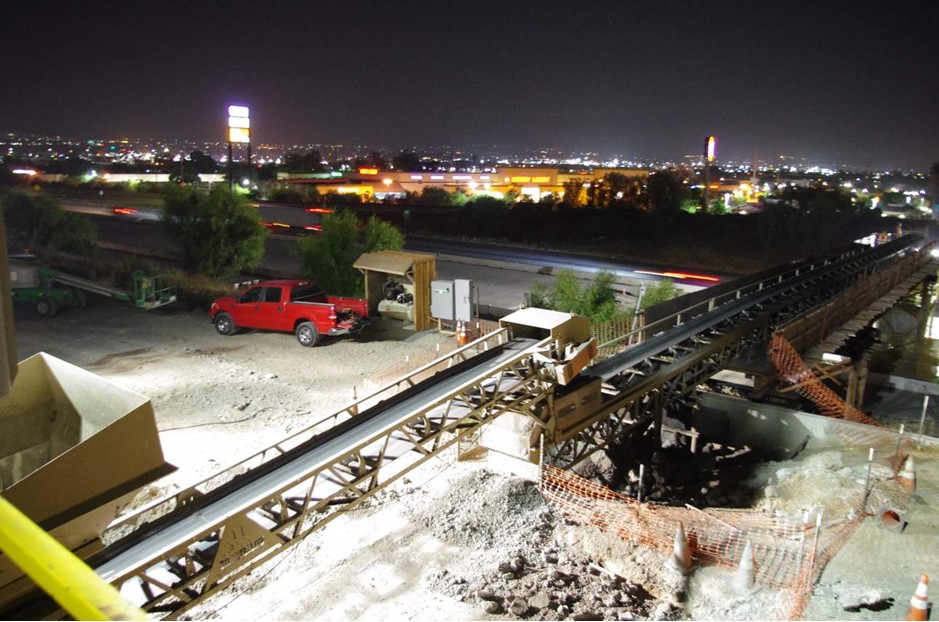 The conveyor belt system carries the concrete from the batch plant over a falsework bridge spanning the northbound lanes of I-15. Photo courtesy of Security Paving Co.

This process delivered “fresher” concrete to the pavement, minimizing moisture loss, as it was delivered so quickly. The batch plant conveyor bridge system also eliminated the inconvenience of slowing or stopping vehicle traffic that would have been necessary to give the concrete delivery trucks access to the median. This saved motorists hours of time stopped in traffic. It also saved the project thousands of dollars because a traffic crew and all of the components necessary to safely divert traffic was not needed. 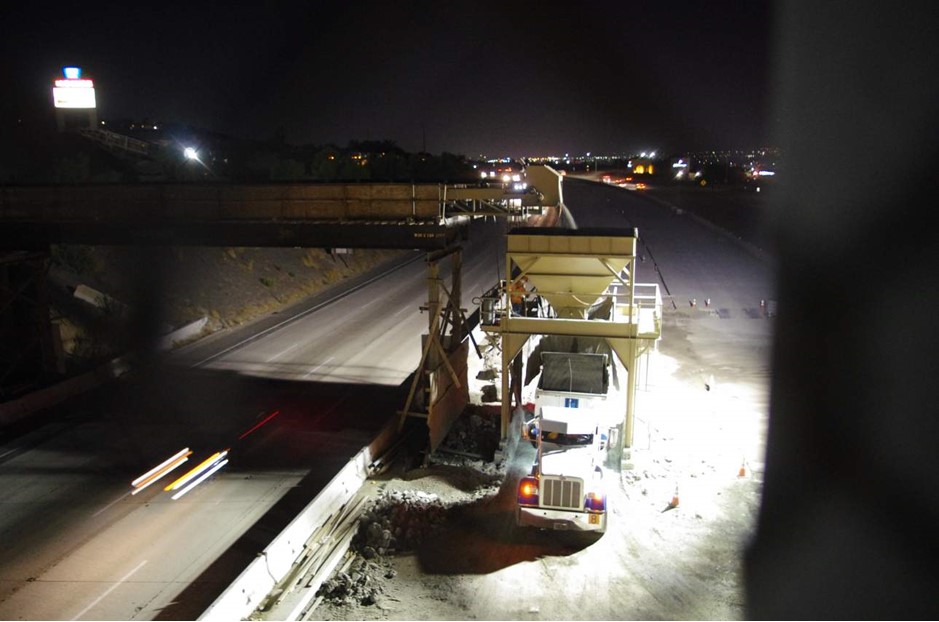 At the end of the conveyor belt, the concrete is funneled down into the dump truck to be delivered to the roadway section currently being paved. Photo courtesy of Security Paving Co.

Funding and Job Creation
RCTC is using a combination of federal and local sources to fund the project. Federal sources include a Transportation Infrastructure Finance and Innovation Act loan, and allocations from the Congestion Management Air Quality program and the Surface Transportation Block Grant program. Local funding is provided by Measure A, the voter-approved half-cent sales tax for transportation improvements in Riverside County. Toll revenue will be used to repay a $152-million federal transportation infrastructure loan and to operate and maintain the lanes. As a measure of economic stimulus, more than 3,300 jobs were created during design and construction.

In the weeks ahead, RCTC will monitor traffic conditions and make adjustments to ensure smooth operations, with a close eye on traffic flow along southbound I-15 through south Corona and into Temescal Valley, which currently experiences daily bottlenecks during afternoon peak commute times.

The new 15 Express Lanes are complete and now open to traffic. Photo courtesy of RCTC. 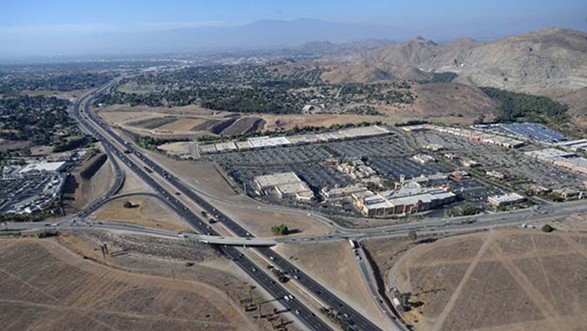 RCTC awarded the design-build project to the Myers-Rados Joint Venture, with TY Lin serving as its designer. In the design-build process, the designers, engineers, and crews all work in partnership with Caltrans and RCTC, and unforeseen construction hindrances can be readily accommodated into the design. Consequently, phasing and scheduling shifts can be immediately implemented to keep the project advancing on time and within budget.

Infrastructure work prior to the actual paving of the highway encompassed driving 842 piles, laying 1,500 linear feet of drainage pipe, and the installation of 669 tons of rebar. In addition, more than 103,000 cubic yards of dirt have been removed. 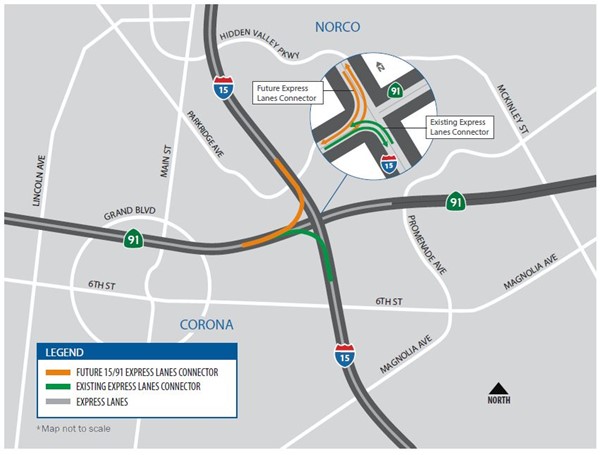 Senate Bill 132 provided $180 million of the $270 million project cost. The remaining $90 million is provided by toll revenue from the 91 Express Lanes. The project is estimated to create 2,300 jobs.

“RCTC is excited to have opened the 15 Express Lanes earlier this month, and we are wasting no time starting work on yet another traffic solution, the much-needed 15/91 Express Lanes Connector,” said RCTC Chair and Palm Desert Mayor Pro Tem Jan Harnik. “As we emerge from the pandemic and see more vehicles back on the road, this project will be an essential new travel option for drivers in northwest Riverside County,” she said. 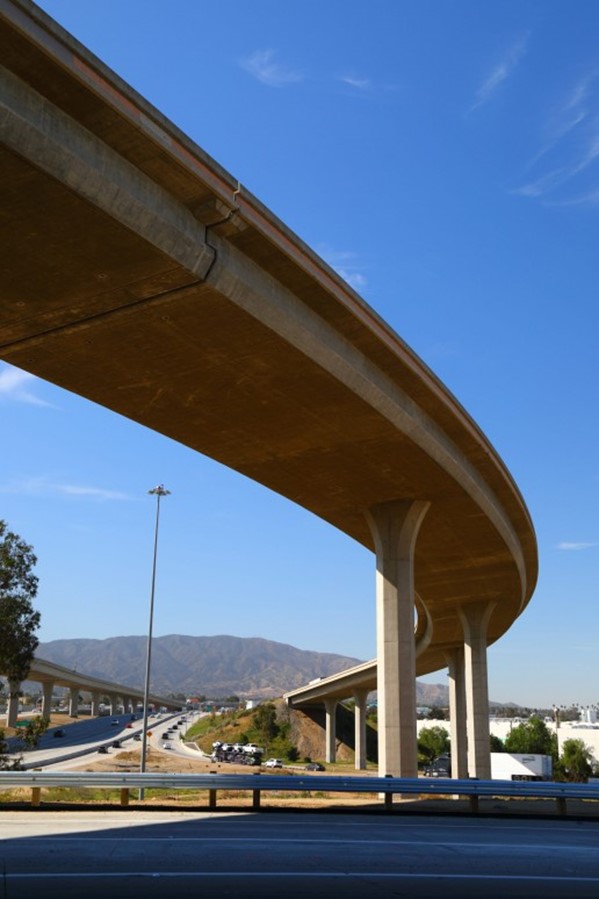 A part of the tolled system, the Express Connector will offer reliable, convenient travel for residents of Corona, Norco, Jurupa Valley, and Eastvale, along with areas north in San Bernardino County. Express buses also will be able to use the new lanes.

In addition to the new connector, the project will extend an outside lane on eastbound 91 through the I-15 interchange to the Promenade overcrossing. This extension will also shift the eastern end of the 91 Express Lanes approximately one-half mile from its current end point to help with vehicle merging in this area.

Throughout the project, motorists will see periodic nighttime closures of lanes and connectors as well as traffic shifts between the general-purpose lanes and express lanes to provide room for construction. The crews need unfettered access and the nighttime closures minimize the disruption to traffic. Four single-direction weekend closures will be needed in 2022 and 2023 for crews to place and later remove the falsework above the roadway.

For a video on the construction of the 15/91 Express Lanes Connector from RCTC, go to: https://www.youtube.com/watch?v=xBaTAQEGB-0