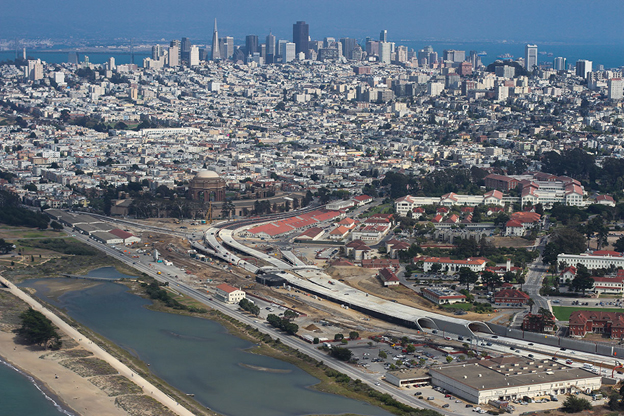 The Presidio Parkway is the scenic, heavily traveled gateway between the Golden Gate Bridge and the City of San Francisco. It’s a stunning, iconic section of Highway 101 that flows along the waters of San Francisco Bay, serving as a commuter corridor for Marin and Sonoma County workers coming into The City, and a vista route for tourists visiting Baghdad-By-The-Bay. The roadway, on average, carries more than 120,000 auto trips per day.

Built in 1933-1937, as part of the construction of the Golden Gate Bridge, the 1.6-mile roadway, originally named Doyle Drive, was reaching the end of its useful life after more than 75 years of service. The route had become structurally and seismically deficient and needed to be replaced. Inherent safety liabilities also loomed large – no median, no shoulders, and exit ramps with extremely tight turning radii.

Although Doyle Drive is the main transportation corridor through the Presidio, the roadway was not designed for direct access into or out of the Presidio military base. When the Golden Gate Bridge and Doyle Drive were constructed, the U.S. Army required that access to the base be restricted.

Under construction in 1935, Doyle Drive connects San Francisco to the Golden Gate Bridge.

From the Golden Gate Bridge Toll Plaza, Doyle Drive carries travelers west along a high bluff and then transitions to a high, steel-truss viaduct. The roadway then returns to an at-grade segment along the bluff, then switches to an elevated concrete viaduct before returning to at-grade as it passes the Palace of Fine Arts, where it merges with San Francisco surface streets.

The high, steel-truss viaduct, the Presidio Viaduct, is 1,520 feet long and 75 feet from the ground to the bottom of the steel truss at its highest point. The steel truss is 20 feet deep with a concrete road deck on top. The painted steel trusses, which repeat the International Orange color of the Golden Gate Bridge, and gray concrete columns stand out against the green, forested background of the Presidio.

Caltrans began preparing plans for updating Doyle Drive’s aging infrastructure in the early 1970s, and various studies were conducted over the next two decades. In 1992, a task force was convened to work with Caltrans and in 1996, the Doyle Drive Intermodal Study called for the following:

Caltrans and the San Francisco County Transportation Authority jointly led the effort to replace Doyle Drive, with the work to be done in two phases. The first phase was built using a traditional design-bid-build approach and the second via a public-private partnership. The latter enabled the project to be built sooner and includes a 33.5-year maintenance agreement by the private concessionaire to ensure the roadway remains at a high level of operational and maintenance performance for the public.

Historic Preservation & Ecological Rejuvenation Were Key Elements of the Design

The location of this roadway project presented some heady challenges. When it was originally constructed, Doyle Drive passed through a military base, the Presidio, and was designed and built to limit access to the restricted facilities. That former military base is now a National Park within a National Historic Landmark District. 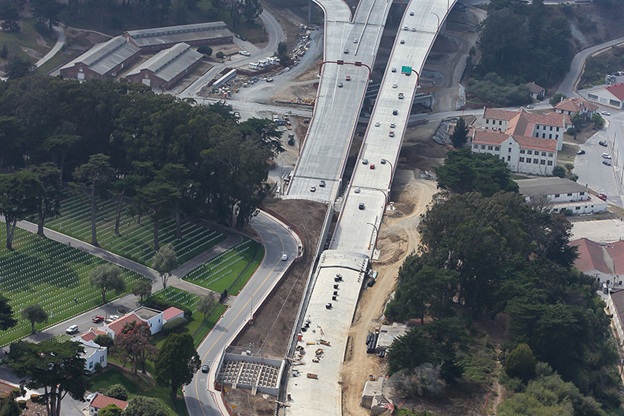 The Presidio Viaduct, at top, under construction, adjacent to the San Francisco National Cemetery

Among the representative organizations involved in the design and construction of the new Presidio Parkway were Caltrans, the San Francisco County Transportation Authority, the Presidio Trust, and the National Park Service. The project also had many stakeholders in the project, including affected San Francisco residents.

Other guidelines that affected the project included:

A community-backed design for the Presidio Parkway was chosen in 2009 after years of intensive regional coordination, environmental review, and interagency planning. The project was carefully designed to withstand the maximum projected earthquake for the region, improve traffic safety, and improve access to the Presidio and Golden Gate National Recreation Area. 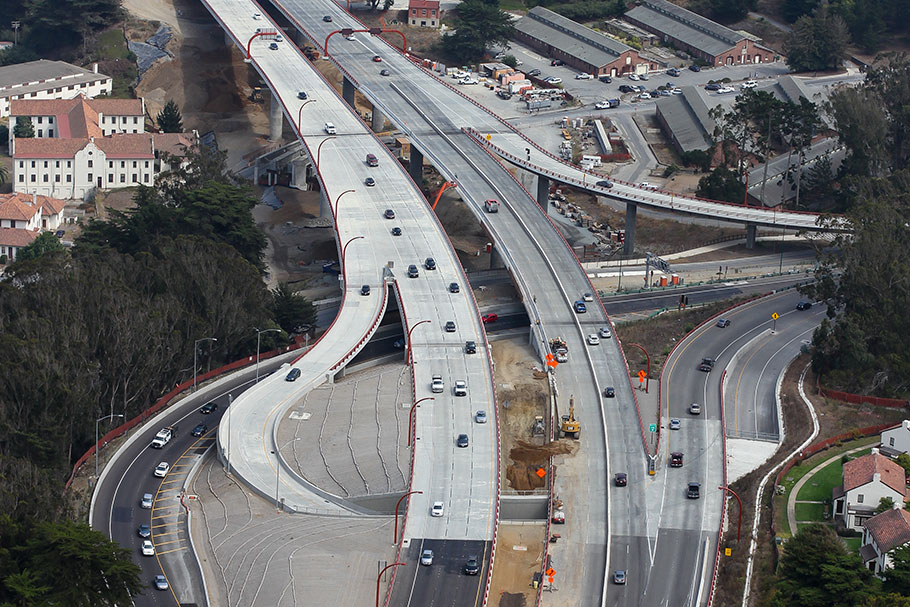 The Park Presidio Interchange was partially opened to traffic during final construction. The exit ramps on the left and right were constructed with continuously reinforced concrete pavement.

Caltrans was responsible for the design, financing, and construction of Phase I, through a traditional design-bid-build process, contracting with C.C. Myers and R & L Brosamer (now Walsh, an SWCPA member) for the construction. Scope of work consisted of a replacement bridge at the Park Presidio Interchange, the new Presidio Viaduct, the southbound Battery Tunnel, and a temporary bypass for traffic during the second phase of construction.

Frank Stevenson, currently at OHL and working on the 405 project in Southern California, was on the Presidio Parkway job with C.C. Myers. He pointed out that the exit lanes of the Park Presidio Interchange, pictured above, were innovations at the time, one of the first two continuously reinforced concrete pavement pilot projects with Caltrans. A proven success with the Presidio Parkway, CRCP has now become a go-to staple of California road and highway construction.

The Phase II collaborative effort was led by Caltrans and the San Francisco County Transportation Authority, with support from the Federal Highway Administration. Caltrans selected Golden Link Concessionaire, founded by HOCHTIEF and Meridiam Infrastructure, to serve as the project’s developers and equity partners to deliver Phase II as a design-build-finance-operate-maintain (DBFOM) availability-pay concession. HTNB Corporation was the lead engineering firm on the project.

Flatiron, an SWCPA member, was the lead JV partner for the design-build contractor, working with Kiewit Infrastructure West in the second phase of the project. This was California’s first transportation public-private partnership (P3) under the state’s new P3 legislation, reducing costs for the owner and ensuring a high maintenance standard during the 33.5-year-long contract.

The Presidio Parkway was also the premier Greenroads P3 project, with sustainable features of the project focusing on safety while improving access and equity along the corridor. A number of responsible design and construction practices were implemented to reduce environmental impacts, as well as lifecycle costs. 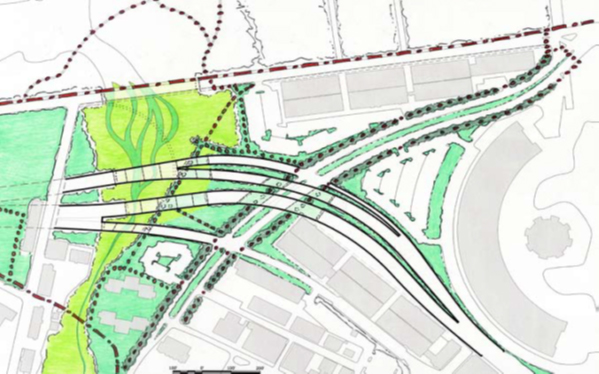 “We consider this a huge recognition for the sustainability efforts of Caltrans, Golden Link Concessionaire (GLC), and Flatiron/Kiewit on this project, which is now not only the first public-private partnership transportation project delivered in California, but also the first P3 Program in the USA to successfully certify,” said Peter van der Waart van Gulik, GLC’s Chief Executive Officer.

Phase II construction began in June 2012 and completed in July 2015, with final landscaping and restoration finished at the end of 2016. The new Presidio Parkway extends from the Golden Gate Bridge Toll Plaza on the west to Broderick Street on the east, and features a six-lane parkway-type roadway with a southbound auxiliary lane between the Park Presidio Interchange and the new Presidio access at Girard Road. The scope of work included placing the freeway partially below ground through cut and cover tunnels, replacing the outdated Doyle Drive and bridge structures, and providing an overall improvement to the historical Presidio thoroughfare. 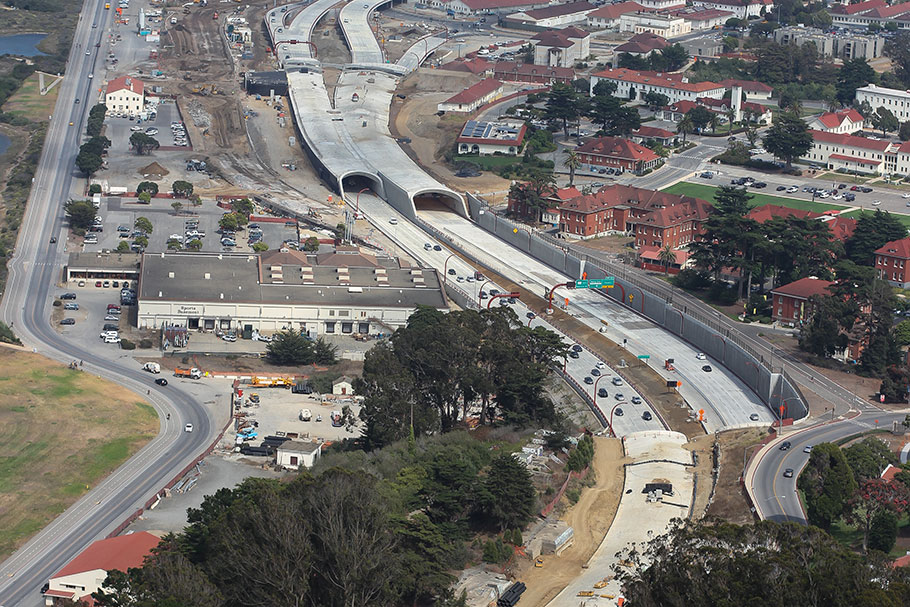 Main Post Tunnels, at top, dip below grade adjacent to the historic Presidio structures on the right.

The roadway consists of various sections (from the Golden Gate Bridge Toll Plaza east to Richardson Avenue) with a landscaped median:

Along with the safety improvements mandated by the Doyle Drive Intermodal Study, the Presidio Parkway Project will save commuting motorists an estimated 30 minutes in travel time, valued at approximately $1.095 billion annually.