Caltrans and Vanguard Construction performed a minor miracle on Highway 242 recently in Concord, California, thanks to some creative value engineering, superb scheduling, and 50 workers onsite at the project.

In just 120 hours, over the two consecutive weekends of July 9th and July 16th, Caltrans and Vanguard replaced 3,500 linear feet of concrete pavement in lanes two and three of northbound State Route 242 in the City of Concord safely and without causing any traffic congestion or delays. Northbound SR 242 was completely closed over the two weekends, along with the affected on- and off-ramps. Without the closures, the project would have taken a full month. 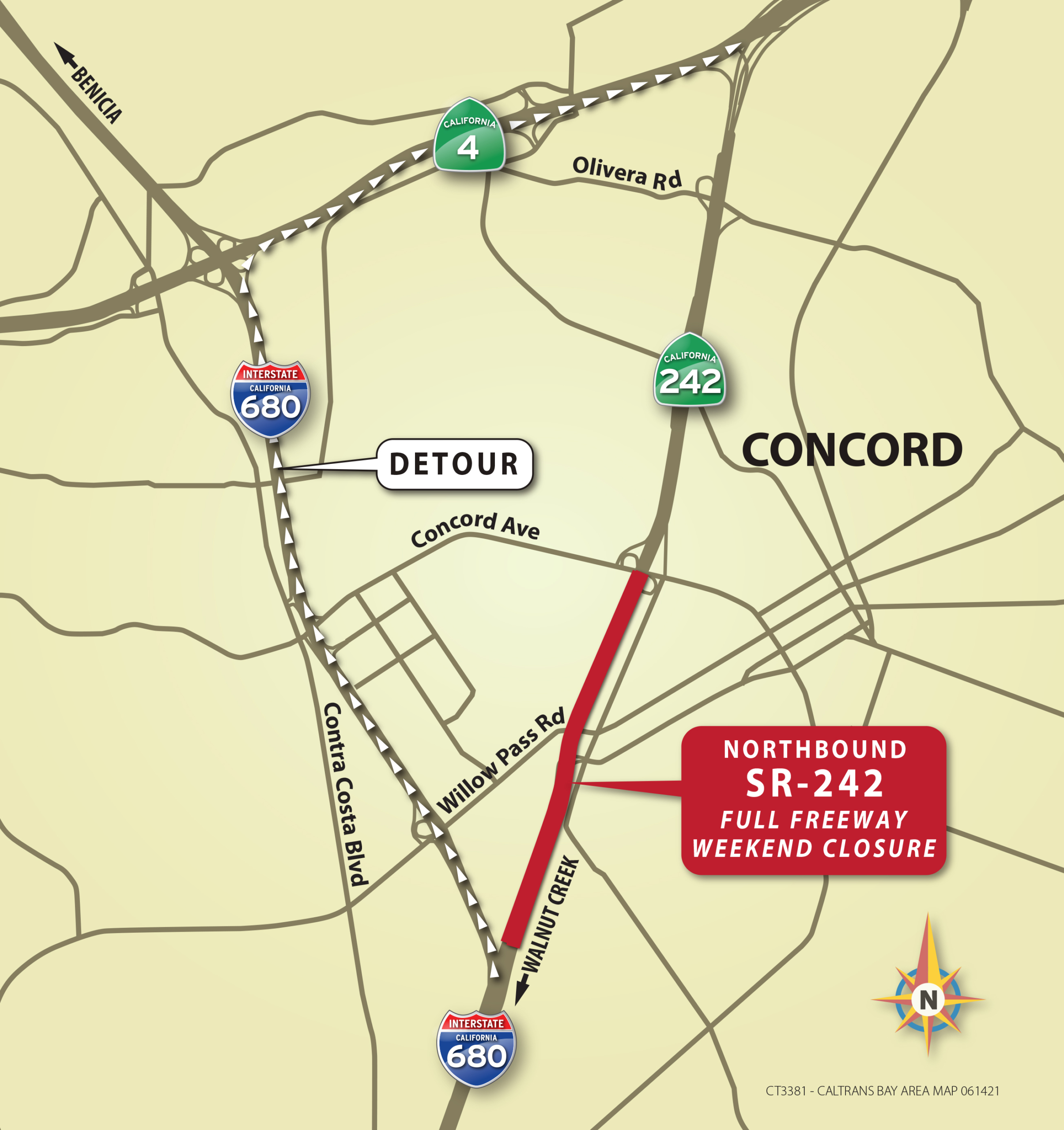 SR 242 is a heavily traveled route that runs directly through the City of Concord, connecting northbound Interstate 680 with State Route 4 to the easterly destinations of Pittsburg and Antioch. Conversely, SR 242 connects westbound SR 4 with southbound I-680. Adjacent to the intersection with I-680 is the Sunvalley Shopping Center, Six Flags Hurricane Harbor, a casino, and a regional airport. Aiding in the avoidance of a traffic nightmare, northbound I-680 served as a detour to connect with eastbound SR 4.

The project was originally planned to be precast pavement to expedite the job, but the Vanguard team, motivated by a value-engineering bonus, experimented with the mix design and was able to transition the project to Continuously Reinforced Concrete Pavement (CRCP) with a thickness of almost one foot (.95’) that reached strength in just 20 hours. Moving to CRCP realized a cost savings of 25%!

The Caltrans team, headed up by Chris Havel, extensively coordinated the scheduling of the project with the cities of Concord and Martinez, and communicated the two-weekend closure of SR 242 through highway message boards, the Caltrans website, Google Maps, and other traffic monitoring apps.

To prepare for the project work, overnight crews performed preliminary saw cutting on the pavement that was to be replaced in northbound lanes two and three. When the route closure took place, three excavation crews simultaneously extracted the old, prepped pavement to save time. 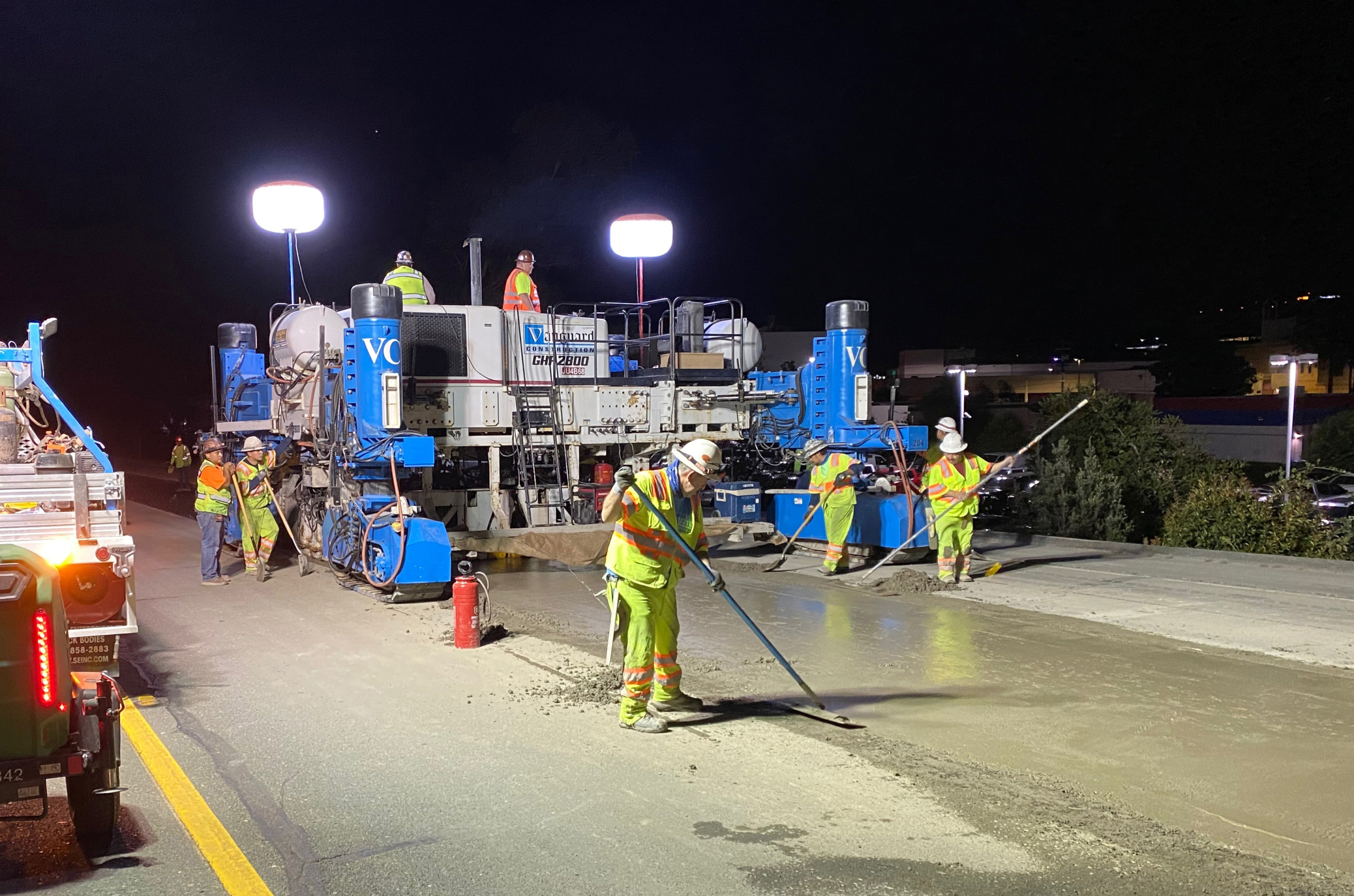 Vanguard set up a portable batch plant in the Caltrans maintenance yard just a short distance away in Pacheco, minimizing transport time of the concrete. To meet the aggressive schedule, 50-member crews were on the job each weekend.

As depicted in the project photos, work moved at a rapid, but measured pace over the course of the two weekend closures. The project successfully completed on Monday, July 19th, with just a small amount of texturing work remaining to be done.

Editor’s note:  The May 21st issue of Innovation Highway featured the Presidio Parkway Project. Vanguard Construction worked with Caltrans and the San Francisco County Transportation Authority on that landmark project.