On a section of Interstate 5 near Solano Beach in San Diego County, adjacent to the project area of the North Coast Corridor Program, Caltrans constructed a pilot project 10 years ago on various ground surfaces that demonstrated the benefits of Conventional Diamond Grinding (CDG) and Next Generation Concrete Surfaces (NGCS). 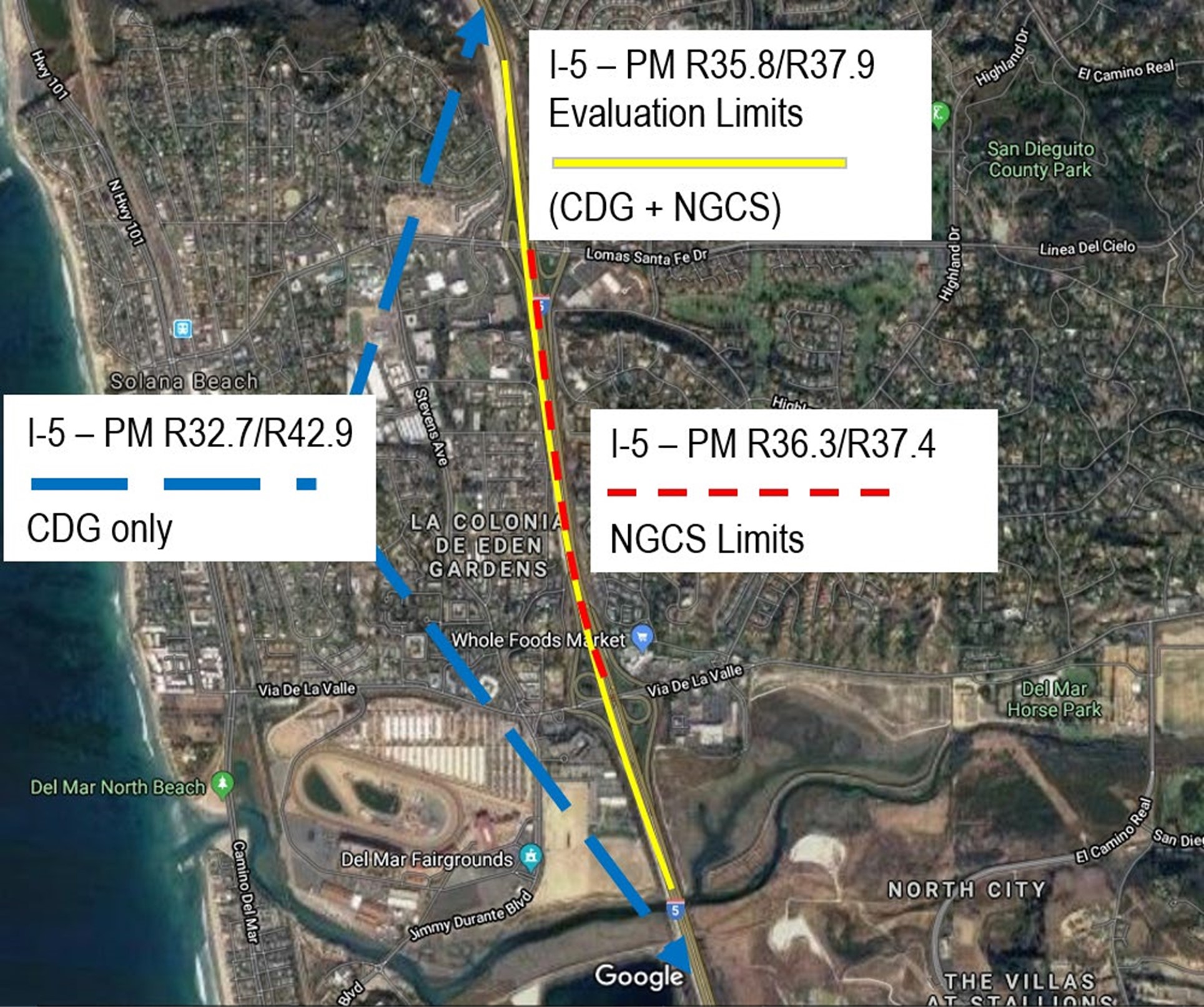 Over the course of the pilot project, the benefits of CDG and NGCS proved to be: Improved Smoothness, Reduced Noise Emissions, Increased Surface Friction, and Increased Texture.

Shhh!
On high-volume, high-speed roadways, noise emissions are caused mainly by the interaction between the vehicle tires and the pavement surface. These noise levels can be irritating to both drivers and the communities adjacent to these highways.

To address highway sound levels, Caltrans has explored various methods over the years to reduce the noise emissions from tire contact on existing concrete pavement surfaces. Some of the attempted solutions include placing thin asphalt overlays and diamond grinding.

Though the asphalt overlay treatments reduce the noise emissions, they require the acquisition, processing, and placement of virgin materials and petroleum products that incur economic and environmental costs. Also, over a relatively short amount of time, the asphalt overlays exhibit deterioration issues and a degradation in the noise reducing characteristics of the surface.

Conventional Diamond Grinding (CDG), on the other hand, has been used successfully by Caltrans for decades as a means of restoring the ride quality and frictional qualities of existing concrete pavements. It is a fast and relatively inexpensive process, does not involve the use of new materials to provide the desired surface characteristics , and can be done multiple times over the life of the pavement.

Interstate 5 Pilot Project Parameters
The Caltrans pilot project featured CDG, as well as Next Generation Concrete Surface (NGCS), a new surface texture that was of interest to Caltrans because of its demonstrated effectiveness in significantly reducing noise emissions to an even greater extent than CDG.

The pilot project aimed to evaluate the noise reduction achieved with CDG and NCGS textures as applied to existing concrete pavements, which were constructed in the 1960s, 1970s, and 2000s. In the project, Caltrans also evaluated the surface friction and smoothness associated with each technology. These are both considered important sustainability indicators. Surface friction directly contributes to driver safety and smoothness contributes to increased rider comfort, decreased damage to vehicles and goods in transit, improved vehicle fuel economy, reduced emissions, and extended pavement service life. This pilot project on Interstate 5 is one of seven similar projects constructed in California in 2012 and 2013.

CDG is a versatile technique that restores functionality of older pavements, brings newer pavements into smoothness compliance through “spot grinding,” and is an effective treatment for newly constructed pavements to establish exceptional functional surface characteristics such as improved smoothness and reduced noise.

How Does It Work?
CDG uses a series of diamond blades of the same diameter mounted on a rotating shaft, with smaller blades placed between them to allow for heat dissipation and slurry flow from the surface. This method produces “fins” or “ridges” between the cuts made by the blade that break off and thereby provide texture. 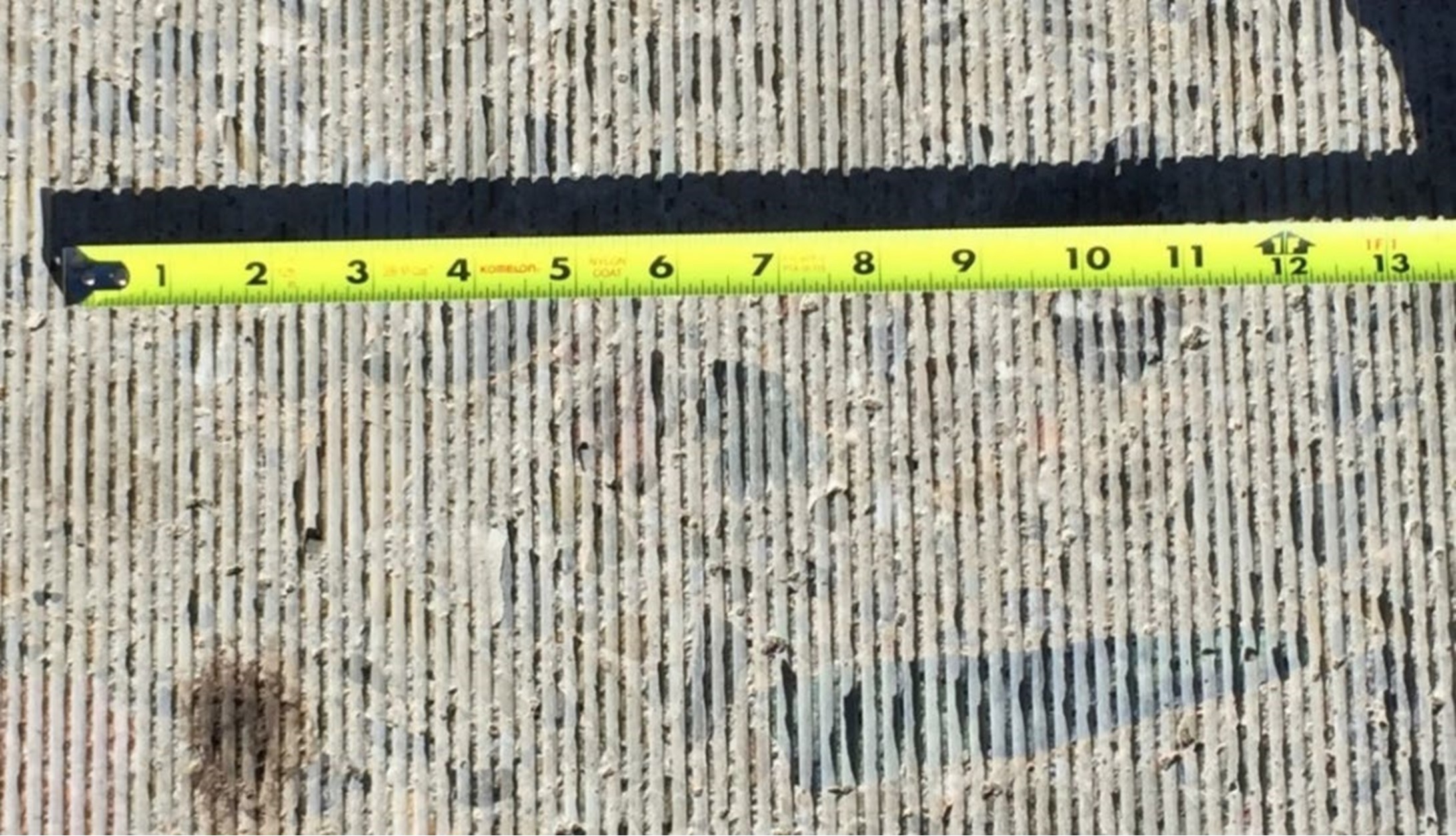 Example of a CDG surface.

NGCS is an innovative surface texture that was developed primarily as a means of reducing noise levels on high-volume roadways. It can be used on virtually any facility type and on both new and existing concrete pavements. The NGCS features a combination of flush grinding and grooving to create a manufactured surface that exhibits reduced noise emissions.

Caltrans specifies that the NGCS be constructed in a two-pass method. The first pass is a profile (flush) grind to improve the ride quality and microtexture. The second pass creates grooves to provide macrotexture. 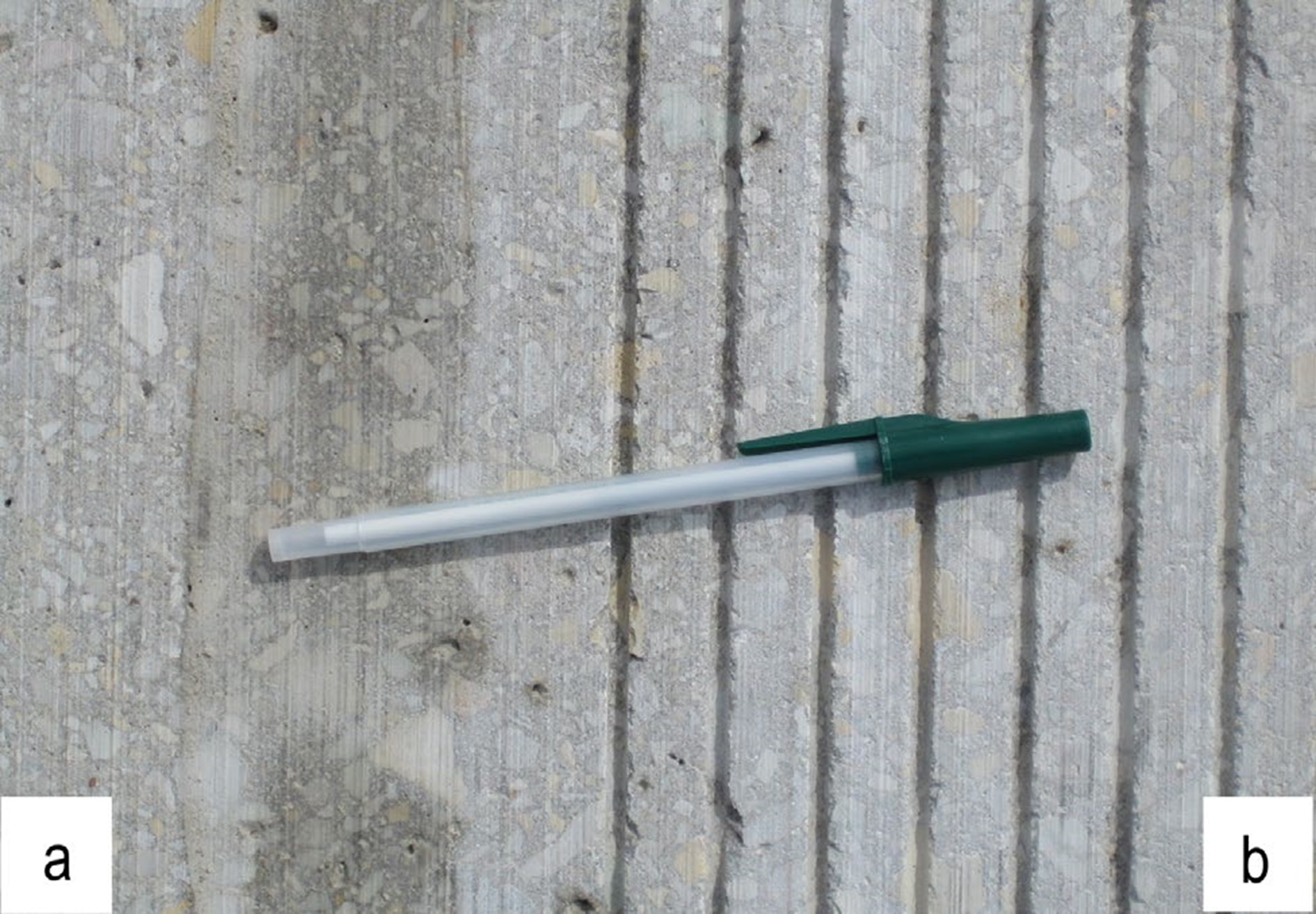 Example of the two-pass NGCS method: After flush grind (a); and after grooving (b).

In the pilot project, Caltrans applied CDG on a 10-mile segment of I-5, all lanes, in 2010. The NGCS was installed in 2012 over one-mile test segments. The average annual daily traffic during the project was 148,000 vehicles per day, with approximately 5,600 of those vehicles being trucks.

Noise generated at the tire-pavement interface was measured using the On-Board Sound Intensity (OBSI) method in accordance with AASHTO TP 76.

Surface Friction was collected in accordance with ASTM E274 featuring the use of both a smooth tire (ASTM E524) and a ribbed tire (ASTEM E501).

Table 1 summarizes the overall testing results for the I-5  project, showing that both CDG and NGCS texturing techniques had positive impacts on sustainability in terms of improved smoothness (expressed as IRI), reduced noise (expressed as OBSI), and improved surface friction (expressed as SN). Furthermore, each of those indicators have significant impacts on the three pillars of sustainability: Economic, Environmental & Social.

Smoothness
The CDG significantly reduced the IRI from 158 to 60 inches/mile – a 60% reduction. The NGCS surface showed a further reduction to 40 inches/mile – a 76% reduction. These reductions have a positive impact on sustainability due to the significant improvement in rider comfort (social benefit), reduction in damage to vehicles and goods (economic benefit), and improved fuel efficiency and reduced vehicle emissions (economic and environmental benefit).

Both techniques provided substantial functional improvement to the existing concrete pavements at a relatively low cost without the addition of new materials to the pavement surface.

Big thanks and full credit go to Tom Van Dam and Jeff Stempihar of NCE who developed this case study and prepared it under FHWA’s Sustainable Pavements Program. The complete study may be found at https://www.fhwa.dot.gov/pavement/sustainability/case_studies/hif19085.pdf.