The 519 miles of L.A.’s freeway system were built with concrete filled with rock and sand washed down from Southern California’s iconic mountain ranges. For evidence of that mineral abundance, look no further than Irwindale, home to more than a dozen massive pits emptied last century for those critical building components.

But now, as another building boom rumbles across Los Angeles, the rock and sand are coming from a much more distant source – Canada’s Vancouver Island, more than 1,400 miles away. 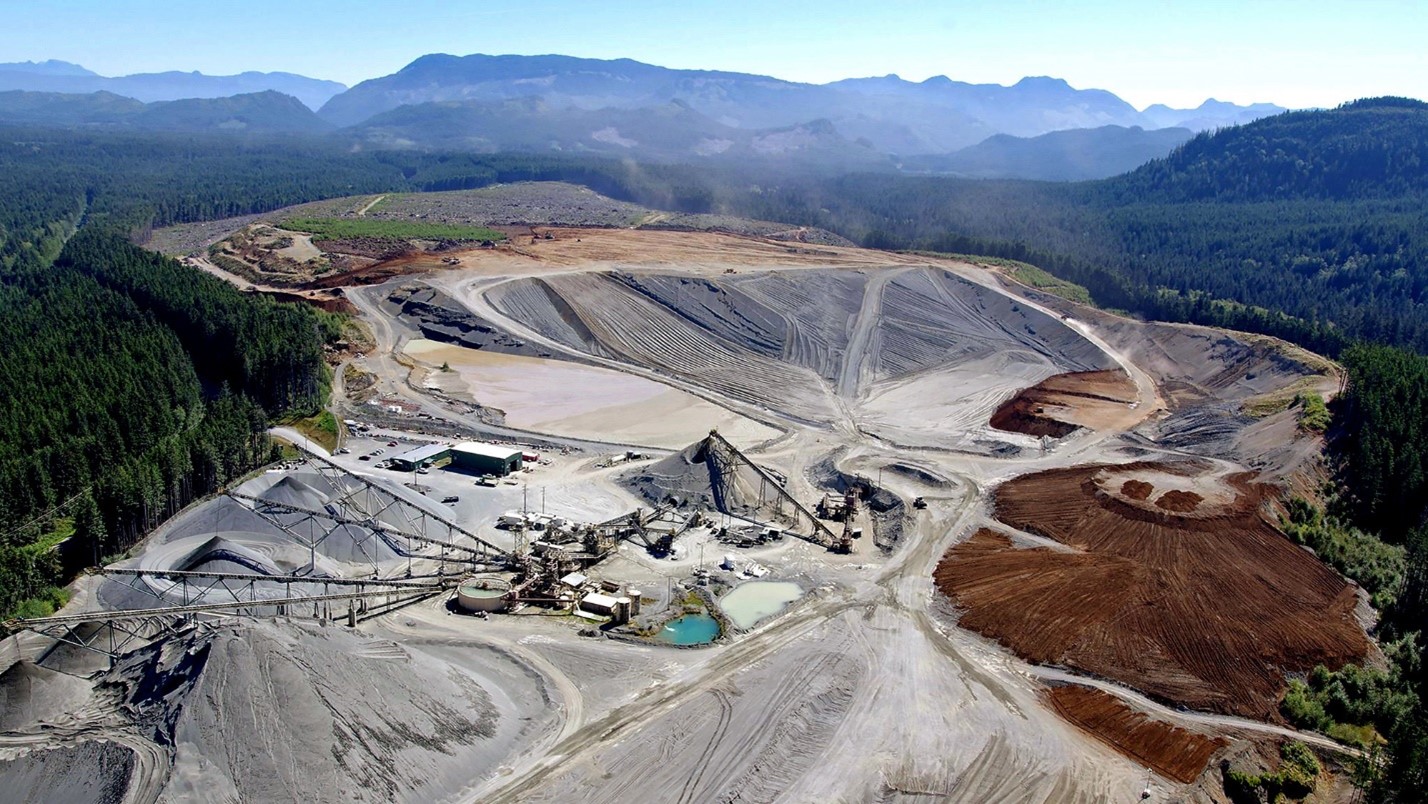 That’s a long distance to ship commodities that are still abundant locally, sell for less than $20 a ton — and often cost more to transport than to mine.

Yet thanks to a combination of materials science, cheap ocean shipping and, some argue, NIMBYism, today’s industrial concrete mixers are often filled with imported rock and sand.

In a new apartment building at 12th Street and Grand Avenue in downtown L.A., concrete formed the building’s 38 stories. Before the wet concrete was leveled and smoothed, before it was pumped to the top of the building, before it was mixed together at a plant near Vernon, it started out as cement powder, water, sand and gravel.

And those last two ingredients began their journey on the largely undeveloped north side of Vancouver Island, just off the southwest coast of British Columbia.

There, near the logging town of Port McNeil, Polaris Materials and the indigenous ‘Namgis First Nation own the Orca Quarry, a site where long-melted glaciers some 10,000 years ago deposited layers of sand and gravel as thick as 300 feet.

The materials, known as aggregate, are scraped from the sides of the quarry pit, washed, sorted into piles and loaded onto conveyor belts that stretch more than a mile to a terminal floating on the Broughton Strait.

Then, the rock and sand are dumped into dry-bulk carriers — picture an oil tanker, but designed to carry solid cargo such as coal or grain. Each ship can carry about 75,000 tons of aggregate. From Port McNeil, it’s a four-day, 1,450-mile voyage down the coast to the Port of Long Beach, where Vancouver, Canada-based Polaris leases eight acres of waterside real estate. 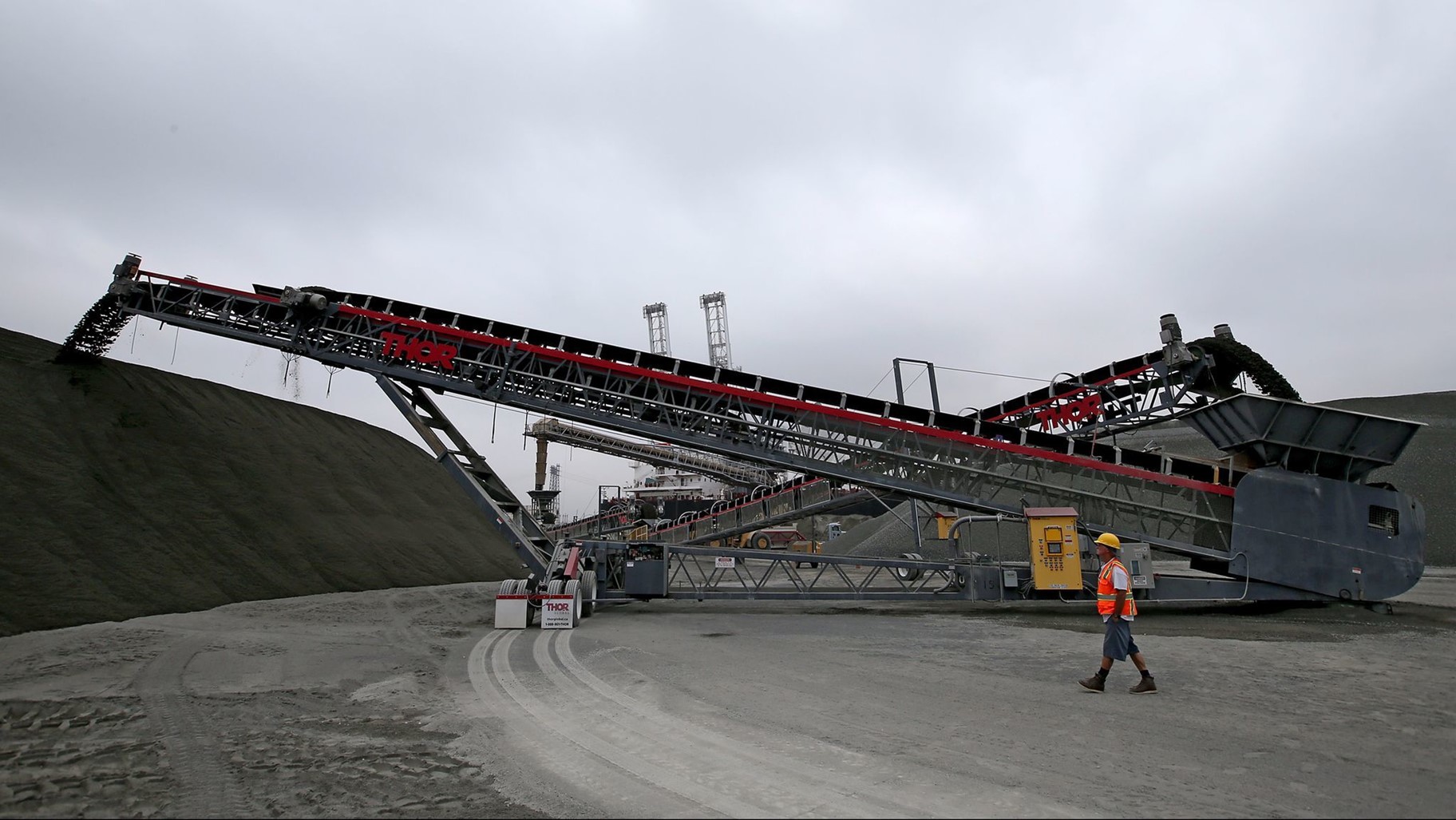 It’s then time for the aggregate to make its way to the construction sites — and, for the first time, to be loaded into trucks and be transported by road.

The fact that Polaris can move its aggregate from a Canadian quarry all the way to Long Beach without being transported by road is one of the reasons it’s feasible to export such heavy, cheap material over such a long distance.

Warren Coalson, a consultant to California mine and quarry operators, estimates it costs $220 to haul a standard 25-ton truckload on a 25-mile trip in L.A. traffic. That works out to about 35 cents per ton per mile.

That leads to some striking math: To ship one ton of rock over 1,450 miles of ocean to Long Beach costs about $7.25. To truck it from Long Beach to downtown L.A., about 25 miles, adds an additional $8.75. And at $16 combined, that’s less than the $22.75 it might cost to truck a ton of aggregate on the 65-mile trip from a quarry in Palmdale to downtown.

“That’s the equation — that’s what makes it work,” Van Dyk said. “The logistics are a big part of it.”

L.A.’s local sand and gravel supplies aren’t as local as they used to be. With most of Irwindale’s quarries now vacant pits, projects might get aggregate from as far away as Palmdale or Victorville. San Diego and the San Francisco Bay Area, too, are having to tap increasingly distant sources.

A 2012 report from the California state geologist estimates that quarries in Los Angeles County and the Bay Area have permits to produce less than one-third of the aggregate that will be needed over the next 50 years. San Diego, which already imports aggregate from Mexico, is in even worse shape.