Granite Construction Company’s reconstruction of Sacramento International Airport’s Runway 16R-34L is an award-winning, two-fold success that can serve as a shining example of sustainable construction through innovative reuse.

The project, which took place from April through October in 2019, entailed the construction of an extremely durable runway with a new 25-year lifespan, using advanced concrete paving techniques. As one of just two operating runways at the airport, meeting the construction schedule was paramount.

The $31,260,000-project was awarded to Granite by the County of Sacramento Department of Airports and work started on April 1, 2019. The runway was successfully completed on October 23rd, meeting the original targeted reopening date.

Granite’s innovative reuse techniques recycled 100 percent of the materials from the old runway. Steve Lynch, Granite Construction Company’s Project Manager, is keenly focused on maximizing recycling old materials. He is fully aware of the ongoing decline in the supply of fresh aggregates in California.

“The alluvial deposits where we get our virgin aggregates in this area certainly do not have infinite supply,” he said. “The only way to prolong the life of these aggregates is to reuse and recycle wherever we can. Not only that, but by doing so, we are reducing greenhouse gas emissions and minimizing truck trips that create stress on our roads and highways.”

To achieve the goal of recycling 100 percent of the materials from the old runway, Granite and Sacramento Airport’s Construction Management Team worked to find places to reuse all of the old pavement and base material from the reconstruction project.

The runway was originally constructed in 1967 and had exceeded its service lifespan. The rehab contract called for the complete demolition and reconstruction of the existing runway and the runway electrical systems. The new design included a subsurface drainage system, lean concrete base, fully grooved concrete pavement, and an all-new electrical lighting system.

“The project had a very tight timeline. The runway could only be closed from early April to late October, and if the project exceeded that timeframe, there would be stiff liquidated damages of $25,000 per day,” said Lynch, who has been with Granite for 15 years. “We successfully completed and opened it on time, despite the very tight construction window. We overcame several setbacks, including significant early season rains, some soft subgrade conditions, and added scopes of work in excess of $4 million, and we still opened on the originally scheduled date.” 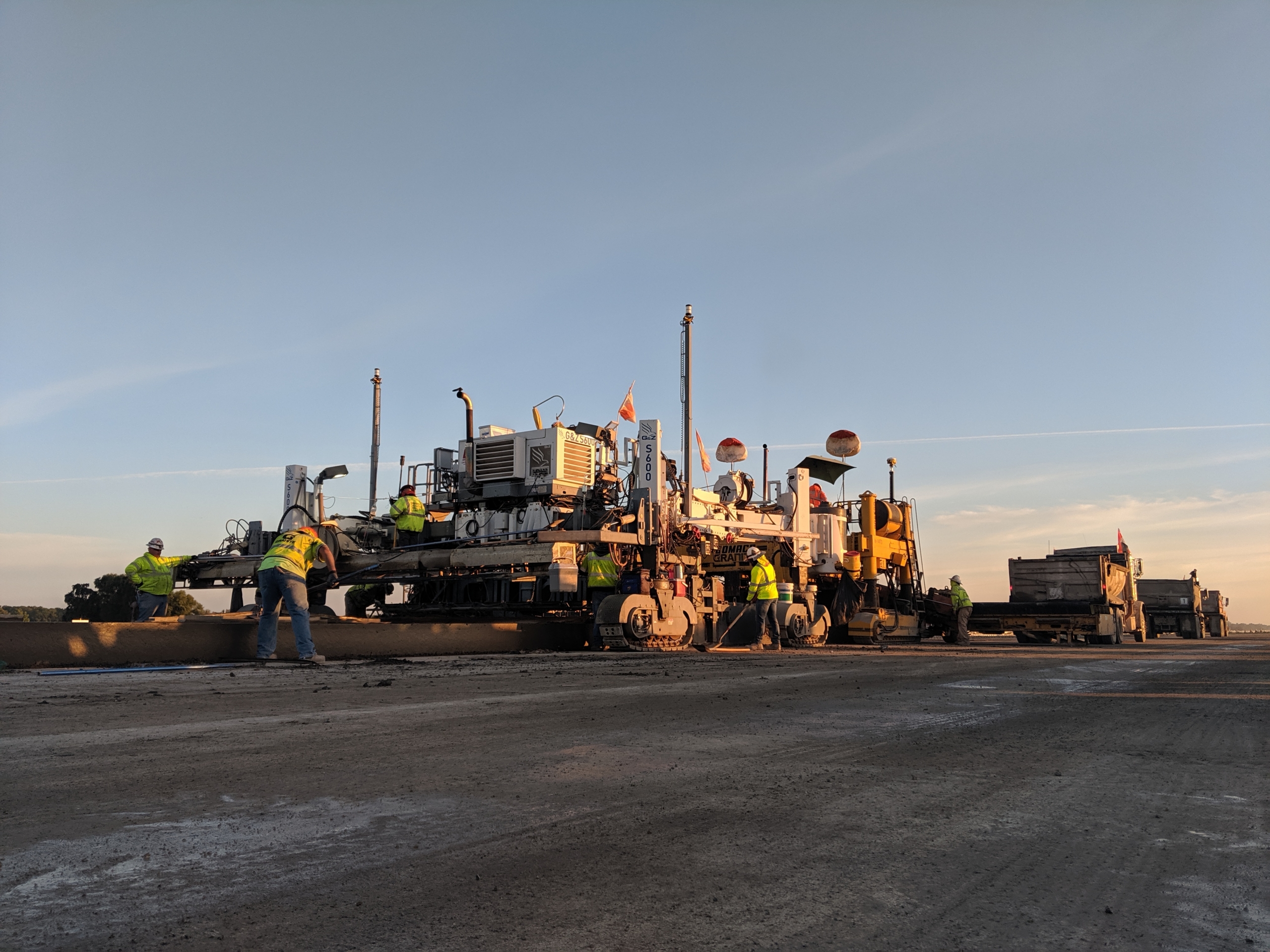 “We knew that the project was coming for a couple of years and we were excited when we secured the contract,” said Lynch, who led the estimating team for the bid. “The project team had  many years of experience both in the paving industry and airport construction, and we all had worked together for many years.

“Fortunately, we had some of the most talented folks in the industry working on this project, on Granite’s team and with our subcontractors. We put down a stellar concrete runway from a quality perspective,” he added. “We were hard pressed, working six to seven days a week, with long hours every day for all scopes of work throughout the project. An effort like this, working in such a compressed time frame, took a tremendous amount of coordination, commitment, and partnering from all of the subs, suppliers, construction management, and design teams. All of the team members involved stepped up to the plate and, most importantly, we did it safely, without an injury on the project.”

Maximizing production was essential due to the limited time available for construction. The additions to the contract included new blast pads, new electrical conduit running down the shoulders, and taxiway paving.

The short work period was based on the foggy conditions that commonly affect the airport in early spring and late fall, and the runway that was replaced had the Cat III lighting system, which allows planes to land in adverse weather conditions.

Crews put in 10-hour days six days a week. During the paving phases, it was round-the-clock for two months between June and August. “We started paving at 2 am to beat the hot weather and ran set-up crews all through the day and had a five-gang drill working around the clock,” said Lynch. “We had 52,000 dowel bars to drill and epoxy into the concrete slab in a four-week time frame, which was quite a bit of work.” 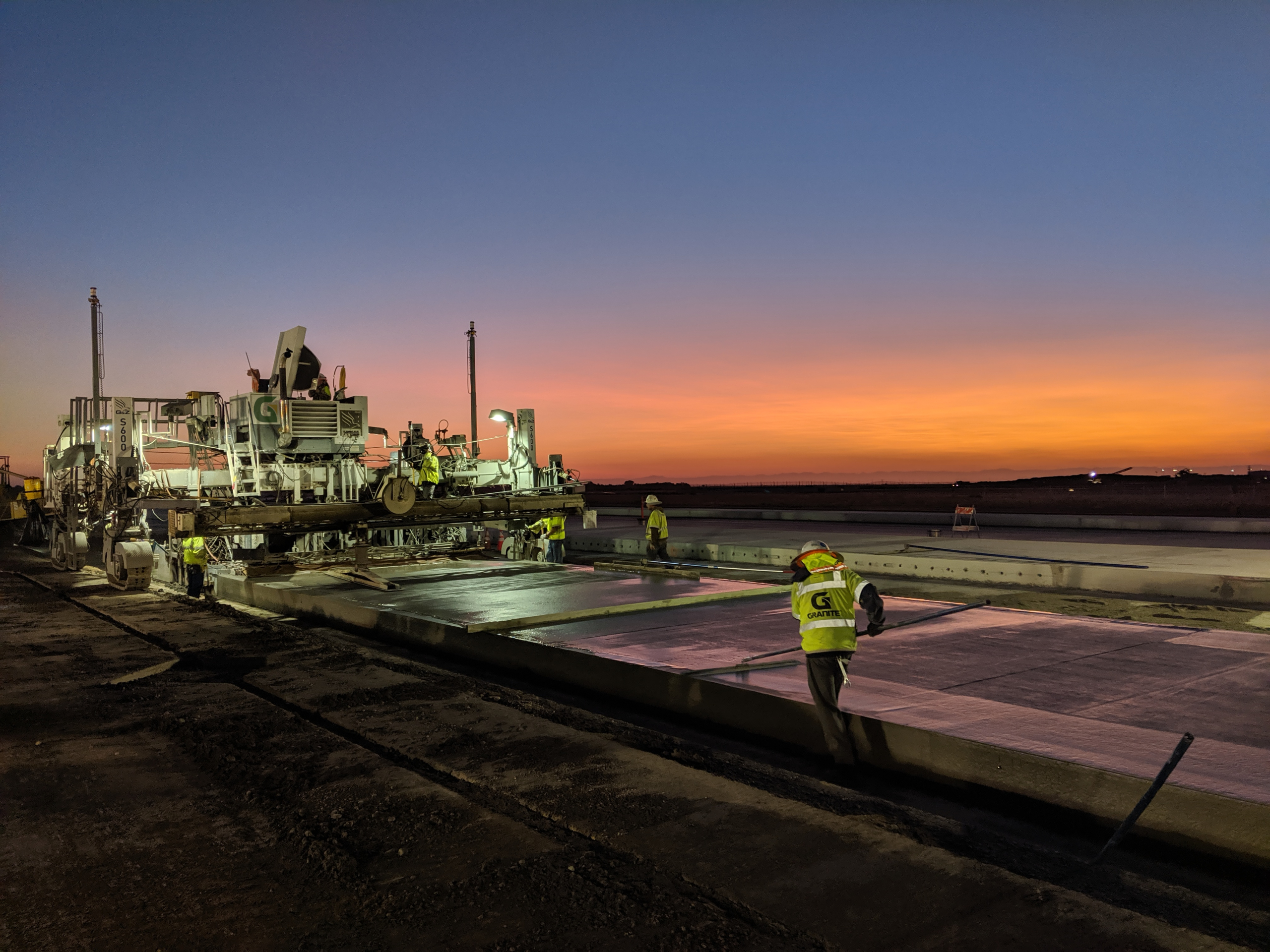 Demolishing the runway required removing a top surface of 12 to 13 inches of asphalt – about 55,000 CY of grindings that the airport will re-use on future projects, and a two-foot structural section, which included 13” of asphalt and 11” of aggregate base.

Once the demolition was completed, the new center-line and shoulder-lighting systems were installed, as well as the sub-drain system on both sides of the runway. New runway construction started with the recompaction of the existing subgrade and placement of a concrete structural section above it.

“The PCC was paved at 18.75’ widths with a 16” thickness,” Lynch said. “There was an outside pass adjacent to the taxiways that had a 20” thickened edge. We were able to slipform all pavement on the project without the use of forms. The paving pattern utilized was skip-bay fashion – paving every other bay before filling in. Trucks were dumped into a GOMACO PS2600 Placer/Spreader. We typically paved for 10 hours per day.

“We finished paving before the heat of the day, providing both relief for the crews and reducing the chances of heat-related issues for the concrete,” he added. “This window proved to be favorable for Q&D Construction’s green saw cutting crew as well. They were typically able to start saw cutting by noon and finish up by 6 pm.”

“This was Granite’s first time utilizing this technology on any paving project across the country,” said Lynch. “This technology involves creating a computer model replicating the pavement design. The design information is then conveyed to computer systems onboard the pavement equipment through Robotic Total Stations, which then utilize the information to produce correct alignment and finish grade. This concept of stringless paving is inexplicably great, but the implementation can be challenging and risky with concrete pavement. The team recognized the benefits through significant cost- and man-hour savings, smoother pavement, and a more consistent finished grade.”

Lynch noted that FAA specs have very stringent straight-edge tolerances and that the project required all pavement to be within ¼” on a 12’ straightedge laid in any orientation, including across construction joints.

“Meeting this specification across longitudinal construction joints was of particular concern,” he said. “With careful attention, slump management, and constant monitoring, we were able to meet this specification 95 percent of the time. The smoothness specifications required us to achieve a PRI of under seven inches per mile, using a California Profilograph and a 0.2-inch blanking band. If any lots were over seven inches, they would be subject to a pay deduct. We performed extremely well with smoothness – 100 percent of the concrete was under seven inches per mile, averaging 1.7 in/mile, and only two must-grind areas existed on the project (at night headers).

“This was attributable to multiple factors – slump management, utilizing the GOMACO PS2600 to manage the head of concrete, initial setup of the paving kit, mix design considerations, and paver speed management,” Lynch added. “Upon completion of the paving, we had only two days of diamond grinding to clean up any straight-edge and must-grind issues.”

The smoothness factor was crucial for Granite, an issue that was paramount from the start of the planning stage and, without question, a key requirement for pilots taking off and landing.

“It all started up front with mix design considerations,” Lynch stated. “We spent a lot of time optimizing the aggregate blend, primarily using the Shilstone method. We were fortunate to have Western Aggregates in Marysville as a supplier and they were open to tweaking their gradations of concrete aggregates to put together a well-blended mix design that helped with the consistency, workability, and smoothness.”

Lynch is eager to do more stringless concrete paving in the future to provide clients with smoother surfaces. “It was quite surprising to me how consistent the finished grade, generated by the stringless system, was for the runway,” he mentioned. “A lot of the guys who have been doing this for a while had concerns and even got a little anxious when we talked about trying a new method. But now, after seeing the results, they wouldn’t have it any other way. Not having to manage the logistics and the physical obstruction that wireline creates is really nice.”

Quality control for the paving was crucial and crews worked hard on managing the concrete consistency coming out of the batch plant to meet various specifications and field requirements. 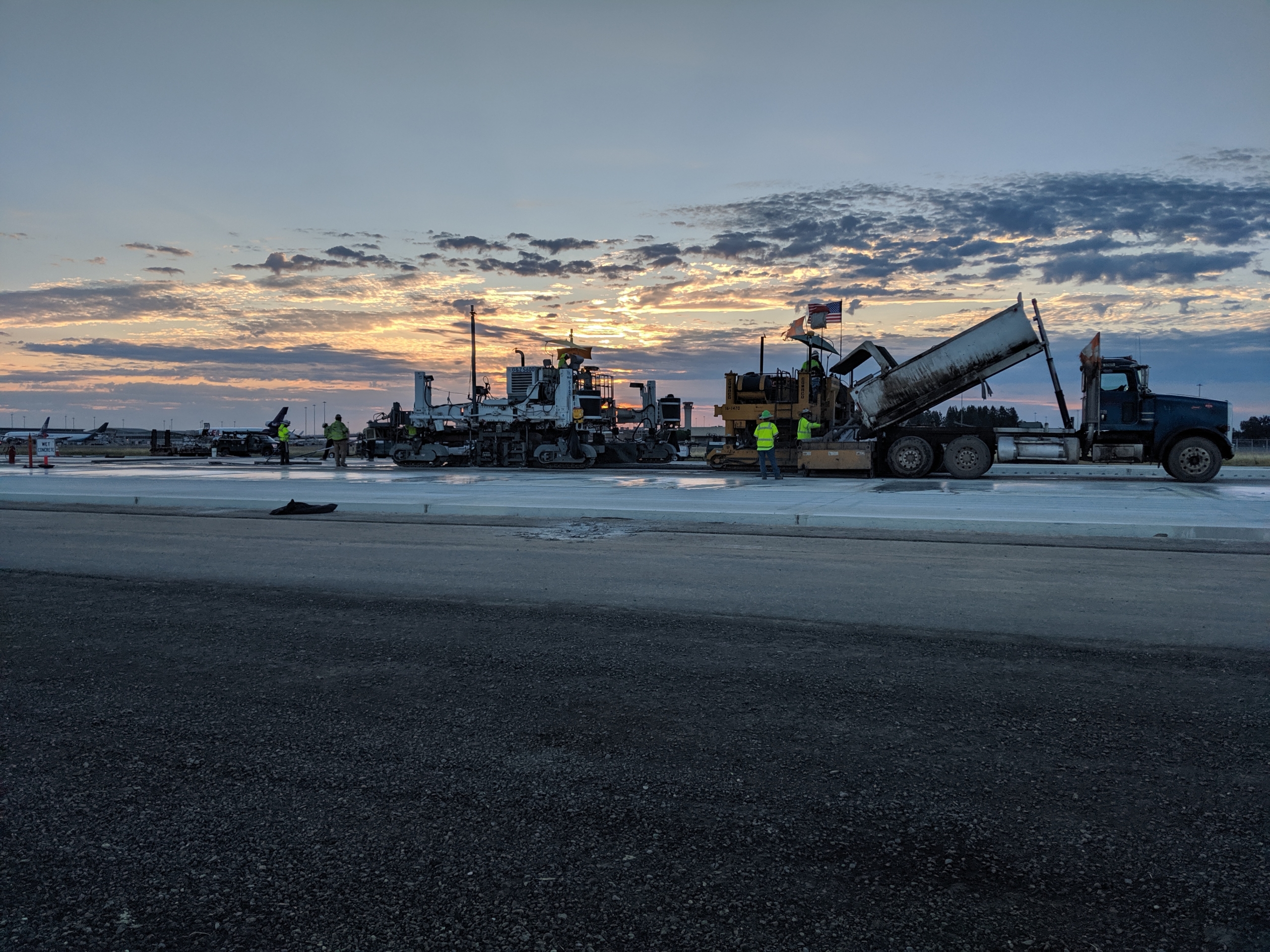 “We were relentless with our quality control testing and efforts; the whole team bought into putting down the best quality product that we could,” emphasized Lynch. “The placer spreader spread the concrete out ahead of the paver to give us an even head of concrete. We consistently managed that paving speed, keeping it on an even keel. Our finishing team was tirelessly verifying straightedge and edge-slump compliance.”

The recycling effort included using a good portion of the old aggregate base into the new LCB. “The LCB specification allows for both reclaimed materials and recycled concrete to be utilized as the aggregate,” Lynch said. “The specification has a gradation band and a multitude of quality criteria that you have to meet, but providing that you meet those standards, recycling is encouraged. We also put some of the reclaimed base into the shoulders and blast pads and we recycled all of the concrete pulled off the runway – an additional 4,000 CY. We brought in a crusher and a screen to support the recycling effort.”

The materials that could not be recycled onsite were used in local construction projects. “At the end of the day, 100 percent of the old pavement materials was recycled,” said Lynch. “Nothing went into landfills or was considered as waste.”

The recycling efforts, estimates Lynch, resulted in the Airport saving $1.2 million and avoiding the generation of greenhouse gases caused by the transportation of materials to landfills and the transported delivery of new aggregates.

Lynch appreciated the efforts and cooperation of Sacramento County to ensure the success of the project. “Having partners sitting across the table who understand the importance of timely decisions and have a teamwork mentality is paramount for a project like this,” he said. “The County of Sacramento Department of Airports and the County Management & Inspection Division checked both of these boxes and, by doing so, helped make this a successful project.”

To execute this project, Granite’s Sacramento team purchased some new equipment: a RexCon Mobile 12 Self-Erecting Central Mix Batch Plant; a G&Z S600 Slipform Paver; an E-Z Drill 210-5 Slab Rider Multi-Gang Concrete Drill; and a Graco Reactor epoxy machine. “We knew we had to have the right toys and reliability was important when we were up against a tight timeline like this one,” said Lynch. “The equipment dealers knew the importance of our timelines and they all successfully stepped up to the plate.”