Coffman Travels East to Rehab Desert Stretch of I-10

The 30-mile stretch of I-10 across southeastern California is in bleak terrain that simmers in year-round desert heat, so when Coffman Specialties received the paving subcontract from Fisher Industries for Caltrans’ $250-million I-10 Blythe Pavement Rehabilitation Project, they knew they were facing challenging, but familiar work. 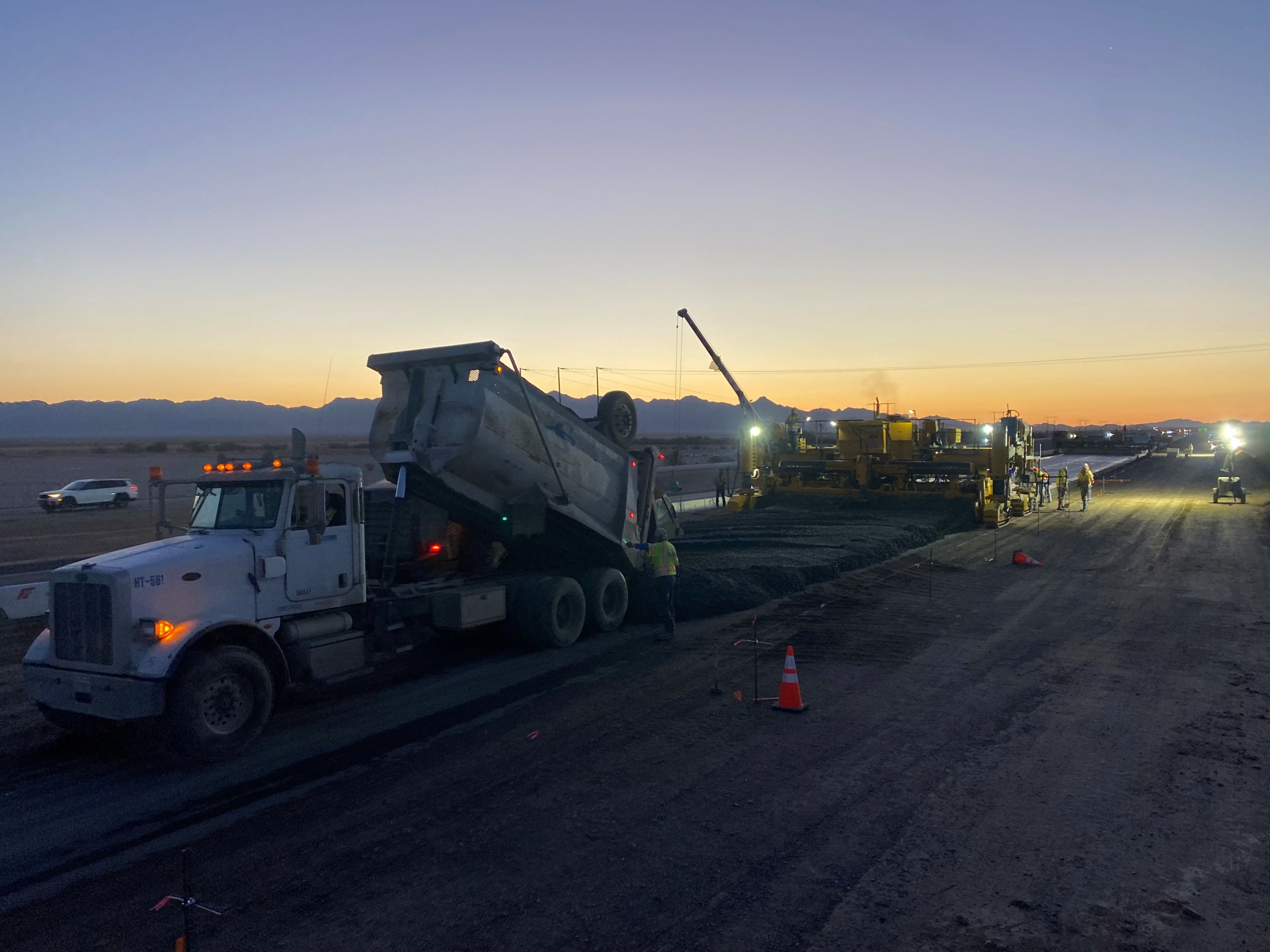 Nighttime paving helps mitigate the effects of the scorching desert heat on both the crews and the freshly placed concrete. Photo courtesy of Kevin Coffman.

“The temperature on the job this morning was 103 degrees,” said Kevin Coffman on Friday, June 17th, driving back from the project. Coffman is in charge of all field paving operations for the company, and if he’s not onsite overseeing a project, he’s either going to or coming back from one. “The majority of the paving work on this portion of I-10 is done at night to minimize the impact of the desert heat.” 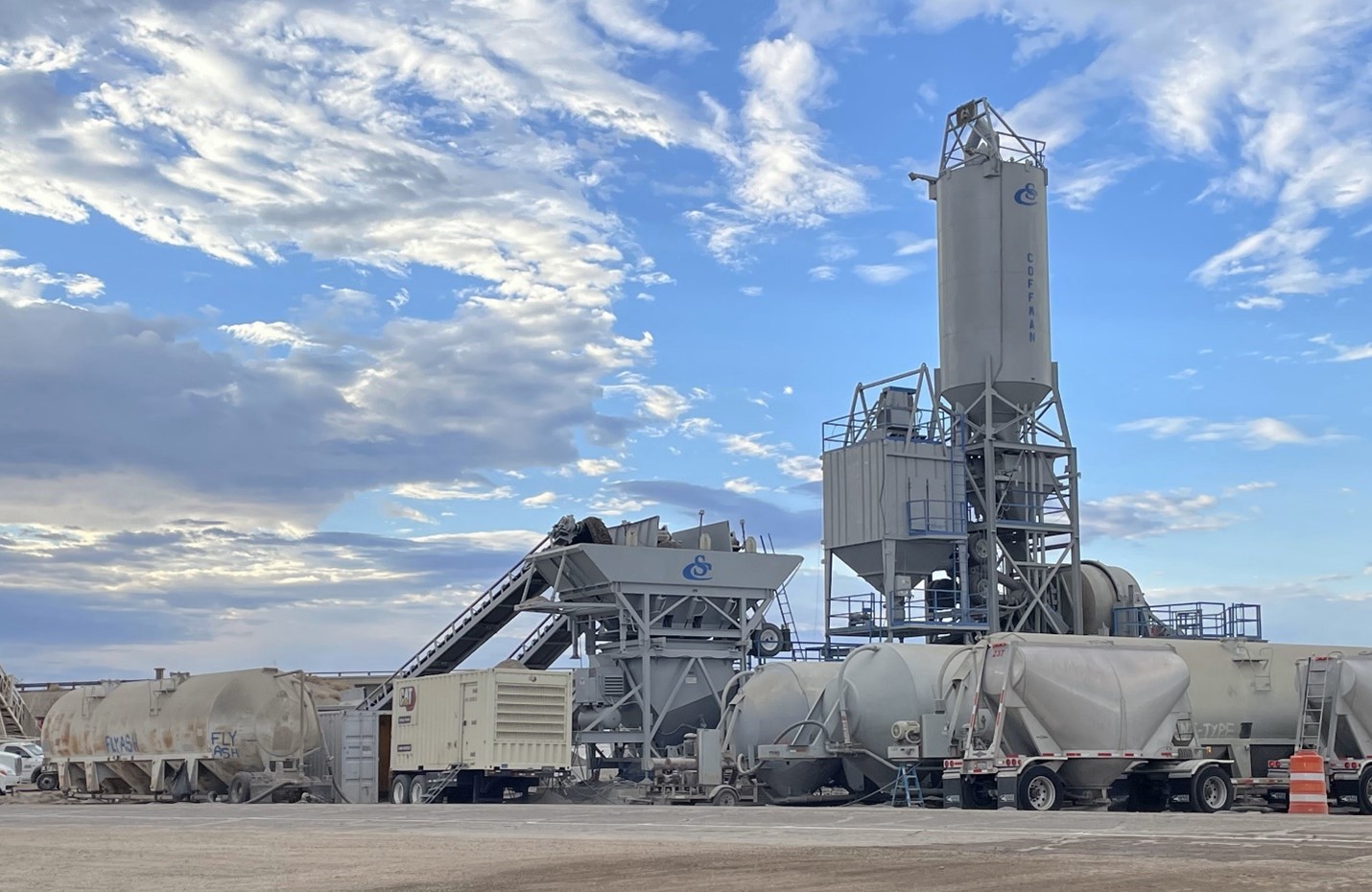 Portable batch plants are an essential part of any remote concrete paving project and this one was no exception. Coffman Specialties erected an ERIE Strayer 12-yard Batch Plant equipped with water chillers to lower the temperature of the batched concrete in the hot desert. At the batch plant, aggregate stockpiles were sprayed with water to lower the temperature, and on the jobsite, a water fogger/mister was set up on the curing machine.

Coffman, however, was met with a challenge when it came to water for the mix. “What was coming up from the new well was unsuitable,” Kevin Coffman explained, “so water is being trucked in from the nearby Colorado River to ensure that we have the right chemistry in the concrete mix.” 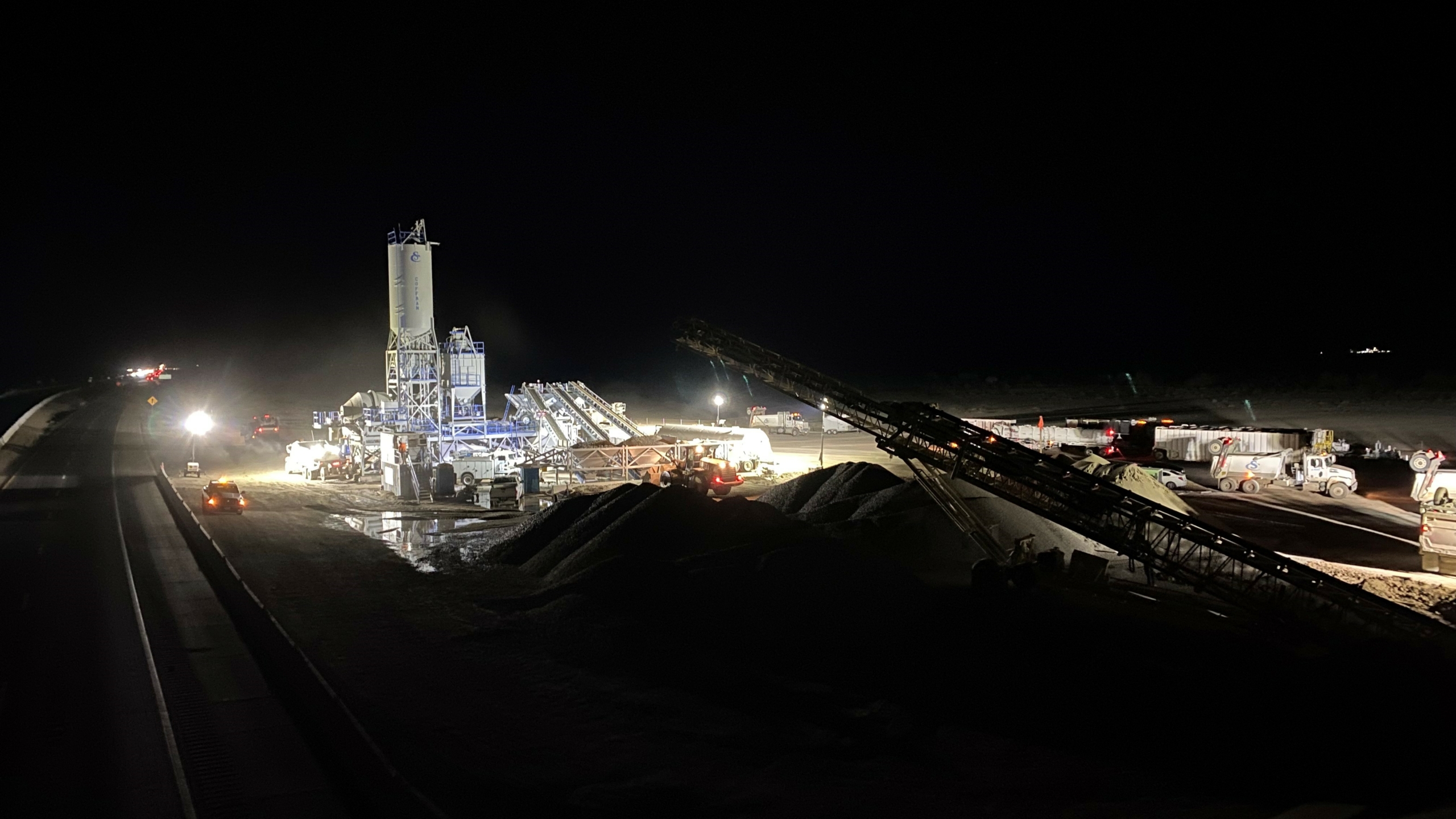 The batch plant was in full operation during the cooler nighttime hours in the desert. Photo courtesy of Kevin Coffman.

Paving work began in early June on the first stage of the project in Riverside County and is scheduled to conclude on August 1st of this year. “More than 80,000 yards of concrete will be poured as the new Jointed Plain Concrete Pavement is put in place,” Coffman stated.

Coffman is paving I-10 with a GOMACO GP4 Slipform Paver equipped with GOMACO’s IDBI Dowel Bar inserter. Along with the new JPCP roadway, shoulders will be repaved, and new guardrails, rumble strips, drainage systems, and ramps will be built. 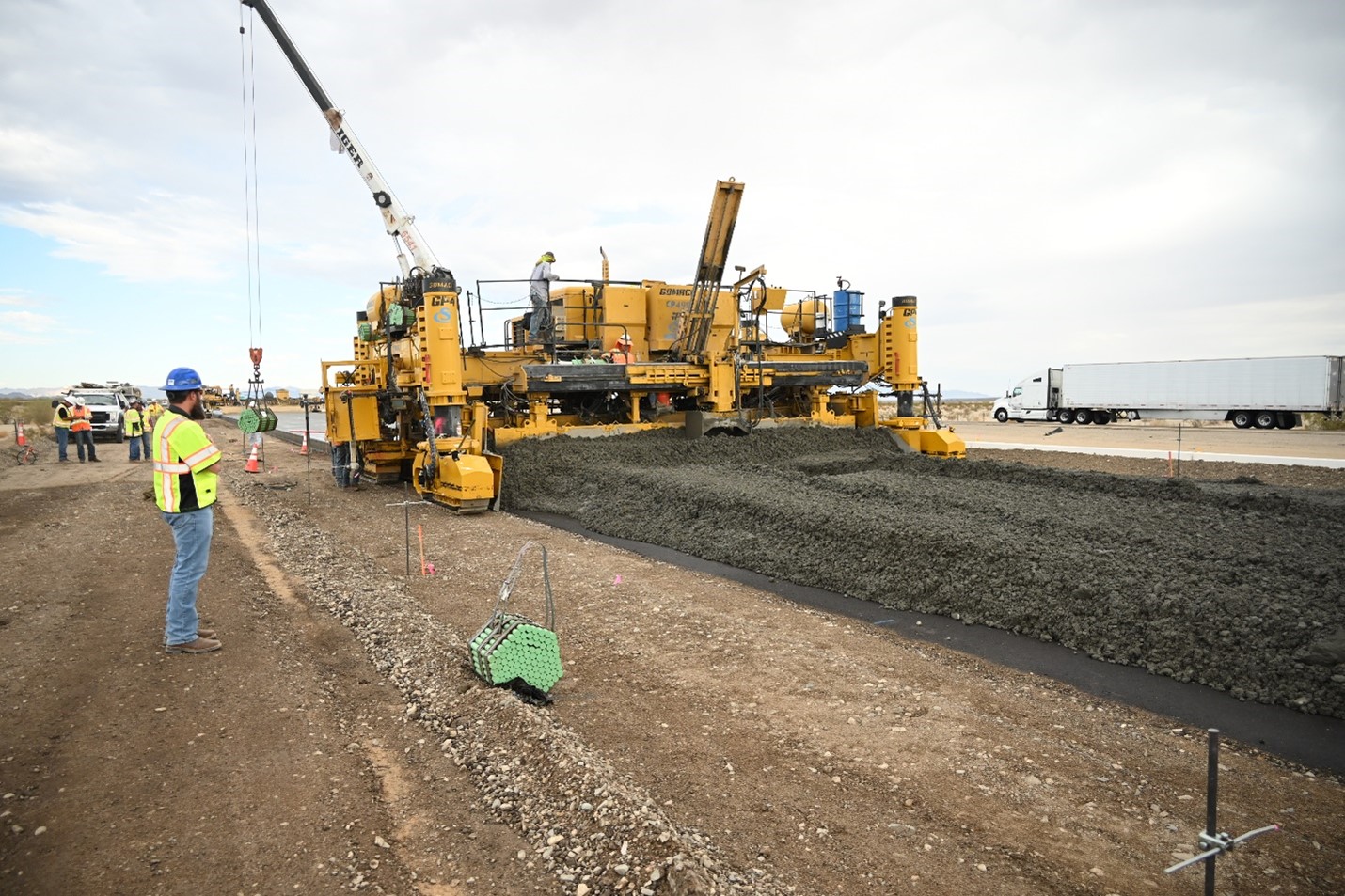 The GOMACO GP4 Slipform Paver in operation on a new stretch of I-10. Photo courtesy of Charles Stuart.

“Working with Caltrans and Fisher on this project,” Coffman continued, “we’ve formed really good partnerships. That enables good communication and helps everyone throughout the project stay on the same page and on schedule.” 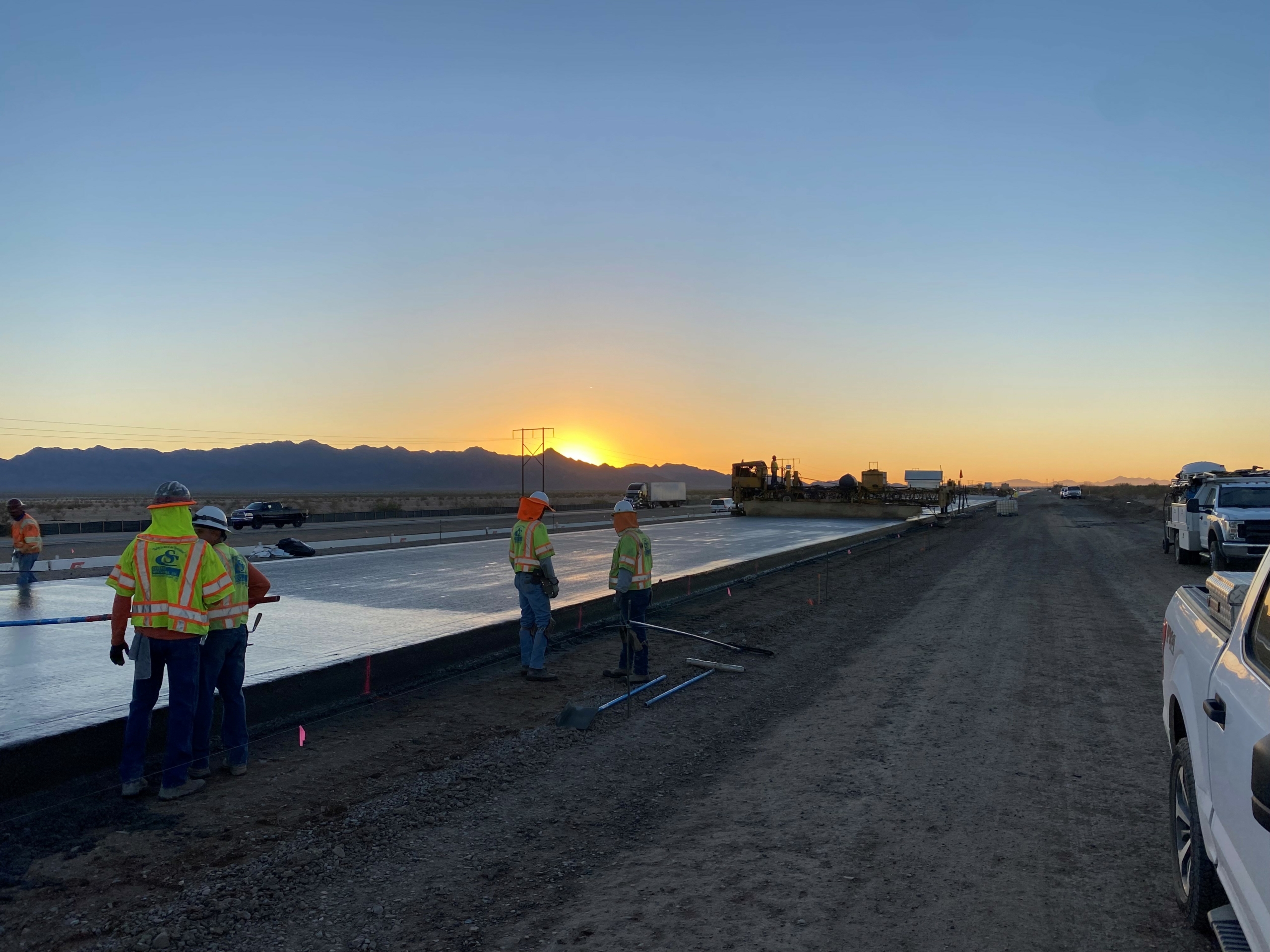 Dawn greets the Coffman Specialty crew as they overlook the newest section of pavement on I-10. Photo courtesy of Kevin Coffman.

The entire section of I-10 that will be rehabbed starts at Desert Center on the western edge, just southeast of Joshua Tree National Park, and extends east to Wiley’s Wash, about 15 miles west of Blythe, encompassing roughly 745 acres. The targeted completion date for the total project is spring 2025.