In an expansive project that encompasses widening I-5 with Express Lanes, making environmental improvements to San Elijo Lagoon, and double-tracking the LOSSAN rail line – the second-busiest intercity rail corridor in the nation, Flatiron, in a joint-venture partnership with Skanska and Stacy and Witbeck, has completed Segments 6 and 8, along with the Encinitas Coastal Trail. Segment 1 will be completed within two months, and Segments 2 and 3 shortly thereafter. The full value of all of the contracts to date is $650 million. These massive projects are all a part of Phase One of the 40-year, $6.5-billion North Coast Corridor (NCC) Program. 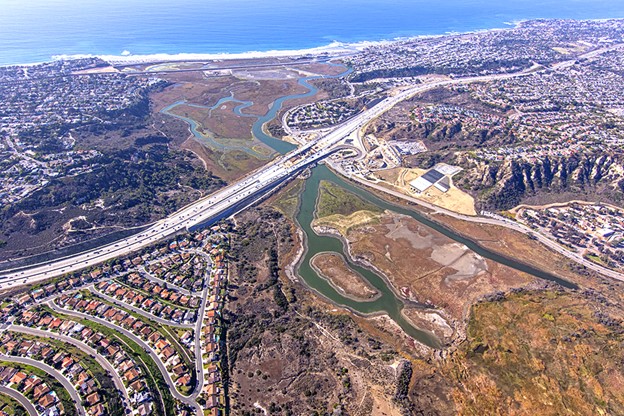 New Express Lanes are pictured being added to the section of I-5 that passes over the San Elijo Lagoon. The LOSSAN Rail Line is at the top of the photo, close to the surf at the beach, as it crosses over the lagoon. Photo courtesy of SANDAG.

Paul Mignone is the Flatiron Program Manager for this extensive and multi-faceted endeavor. “The Flatiron team in San Diego is great to be a part of,” stated Mignone. “We easily adapt to the projects being delivered in the San Diego market, with flexibility and responsiveness. These have proven to be great assets on the NCC.”

Mignone has been with Flatiron for the past 18 years and has been working on the North Coast Corridor Program for the past 7 ½ years; the first two years in precon and the last 5 ½ years in construction. He wore different hats before, but has now been serving as Program Manager for the past 3 ½ years.

“Those qualities – the ability to be flexible and responsive, are part of what’s making the CMGC delivery method on the program so successful,” Mignone explained. “We talk with the client, Caltrans and SANDAG, about risk. We then design the risk out of the project as much as possible. There are always external events, such as floods, that you can’t design out, but we take that into consideration. The goal is designing and building structures and roadways that can withstand unpredictable events of nature.”

Streamlined Planning, Approval & Construction
Caltrans District 11 and SANDAG, the San Diego Association of Governments, found that the integration of highway, transit, and environmental projects provides a net benefit to the community because it allows the streamlining of project planning, approval, and construction.

“Another benefit of the CMGC contract is that it removes some of the pressure from the relationship,” Mignone continued, “as it creates a partnership, a really good partnership where everything is talked about. We work together to find the best approach and best methodology to get the job built right the first time.” 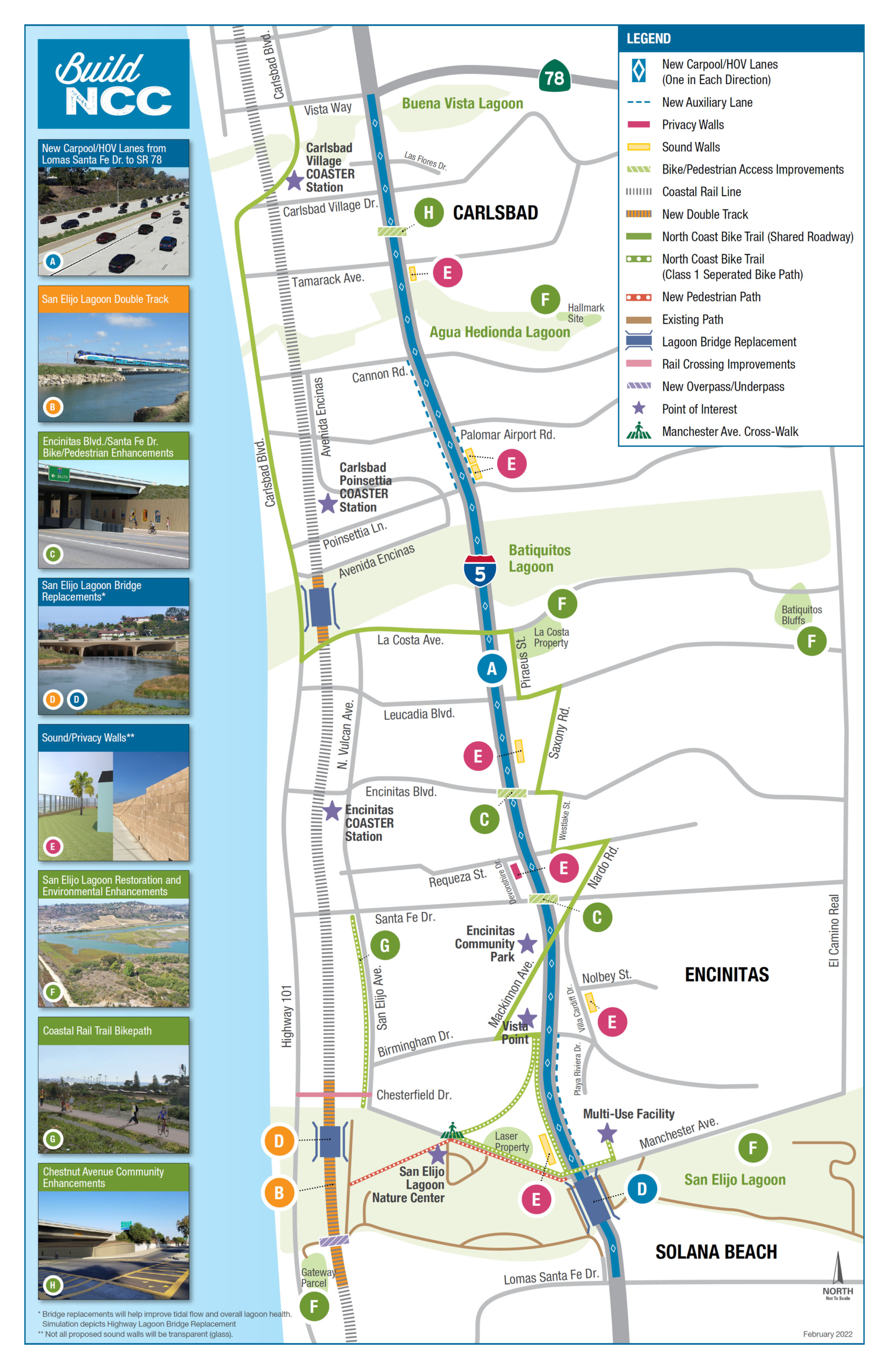 In this region of California, I-5 is a major north-south artery serving the San Diego metropolitan area, Del Mar, Solana Beach, Encinitas, Carlsbad, and Oceanside, handling hundreds of thousands of vehicles daily.

Segment 1 of the Phase One work, started in 2017, encompasses improvements to two miles of the highway, including the construction of two high-occupancy vehicle (HOV) lanes as a part of the Express Lanes Project, and the new, widened concrete bridge over San Elijo Lagoon. Segment 6 adds 1.5 miles of double tracking from CP Cardiff to CP Craven and includes the new replacement rail bridge over the lagoon near the beach.

Segment 4 of the highway work began in October 2021, expanding I-5 with a new Express Lane in each direction from Palomar Airport Road north to SR 78.

Concrete Pavement Details
The roadway work resulted in 113,000 cubic yards of new Jointed Plain Concrete Pavement (JPCP). The structural section for the new roadway is 0.85’ JPCP over HMA 0.25’, Class 2 base 0.35’ and TX-5 Triax fabric. To construct the concrete pavement, Flatiron used primarily a Gomaco GP-2400 Slipform Paver with a Commander III helping with some of the paving work. The project team erected an Erie Strayer batch plant on an available Caltrans site at the interchange of I-5 and SR 56 near Torrey Pines, keeping the concrete transport distance to a minimum. To move the concrete from the trucks to grade, the team used a Gomaco RTP-500 Placing Conveyor.

A tip of the hard hat from Paul Mignone for a great job of getting the concrete on the ground goes to Donnie Riese, Jr., Superintendent, and Steve Handy, General Paving Foreman. 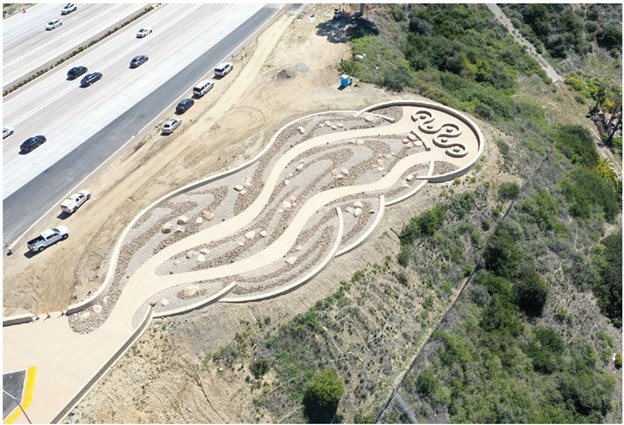 Viewed from above, this new roadside overlook reveals its artistic, aquatic creature design.

A major part of the Segment 1 work was the replacement of the eight-lane bridge that crosses over San Elijo Lagoon with a larger, wider span that accommodates two new carpool lanes. Building such a large bridge over an environmentally sensitive habitat required special work.

San Elijo Lagoon is one of the largest coastal wetlands in San Diego County, a wildlife and recreation area, and home to numerous endangered species within a native habitat. Working in this sensitive environment required special care and attention in order to minimize impact, and protect the endangered species and their habitat. The budget for this Environmental Enhancements Project is $80 million, an important element of the $200-million effort to preserve, enhance, and protect coastal habitats in the corridor.

An Added Eco-Benefit from the New Concrete Spans
When the original, 100-year-old wooden railroad trestle and the I-5 highway bridge were each first erected over the San Elijo Lagoon, the structures caused tidal muting, which means that the trestle and bridge pilings blocked the natural flow of water and coastal sand between the east and west basins of the waterway, trapping the sand in the lagoon.

Now, the new, longer and wider double-track railroad bridge and the wider I-5 bridge open up the passageways beneath the structures and allow greater tidal inundation through the lagoon channels. This greatly improves the lagoon’s water quality and benefits the entire coastal estuary ecosystem. 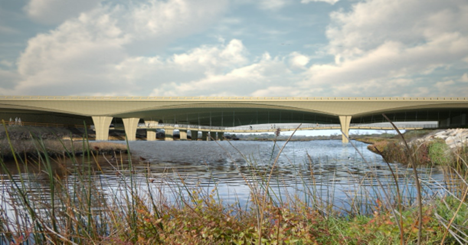 “The lagoon was covered in several feet of rich, black, organic material,” Mignone explained. “We excavated 600,000 cubic yards of sand from the formational material below the muck, forming a gigantic pit called the over-dredge pit. The excavated material was deposited on the beach as beach sand. We then were able to excavate the muck from around the lagoon and deposit it into the hole we created, the over-dredge pit.”

“The build-up caused by tidal muting,” Mignone continued, “was a combination of runoff from the watershed above the lagoon, years of decaying plant life, and some infiltration from the ocean. The tidal muting changed the ecosystem, affecting what would grow and prosper within the lagoon.” 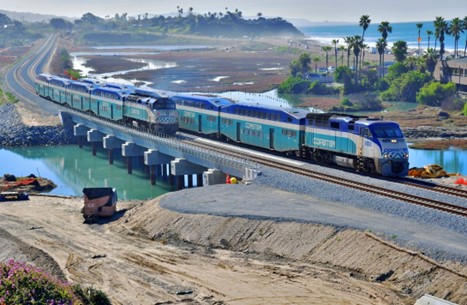 Part of the $54-million Segment 6 was the construction of the new rail bridge over the lagoon. The work on the trestle bridge started in January 2017 in conjunction with Segment 1.

The second track, pictured above, now provides passage for twice as many commuter trains, shortening the commute time, which, in turn, encourages more riders, and thereby reduces automobile traffic on I-5.

Expanding the Regional Bike Network
The third transportation aspect of the NCC Program, budgeted at $27 million, is the expansion of the Regional Bike Network and the reduction of barriers along the coastline for cyclists and pedestrians. New bike lanes and trails are being added along the highway and rail line to facilitate non-motorized travel and provide a connection to the natural environment. 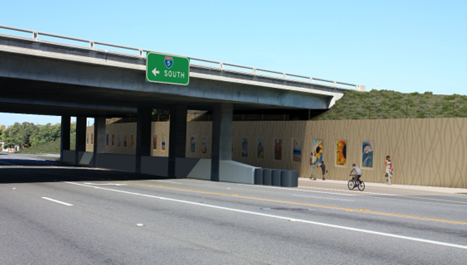 As part of the NCC program and the North Coast Corridor Public Works Plan / Transportation and Resource Enhancement Program, the Encinitas segment of the 44-mile Coastal Rail Trail improves biking and walking connections to several destinations in the Encinitas community, including local parks, businesses, beaches, and schools.

Three pedestrian bridges have been constructed in the third component of the NCC Program. Two are in the lagoon and one hangs under the new Interstate 5 bridge. 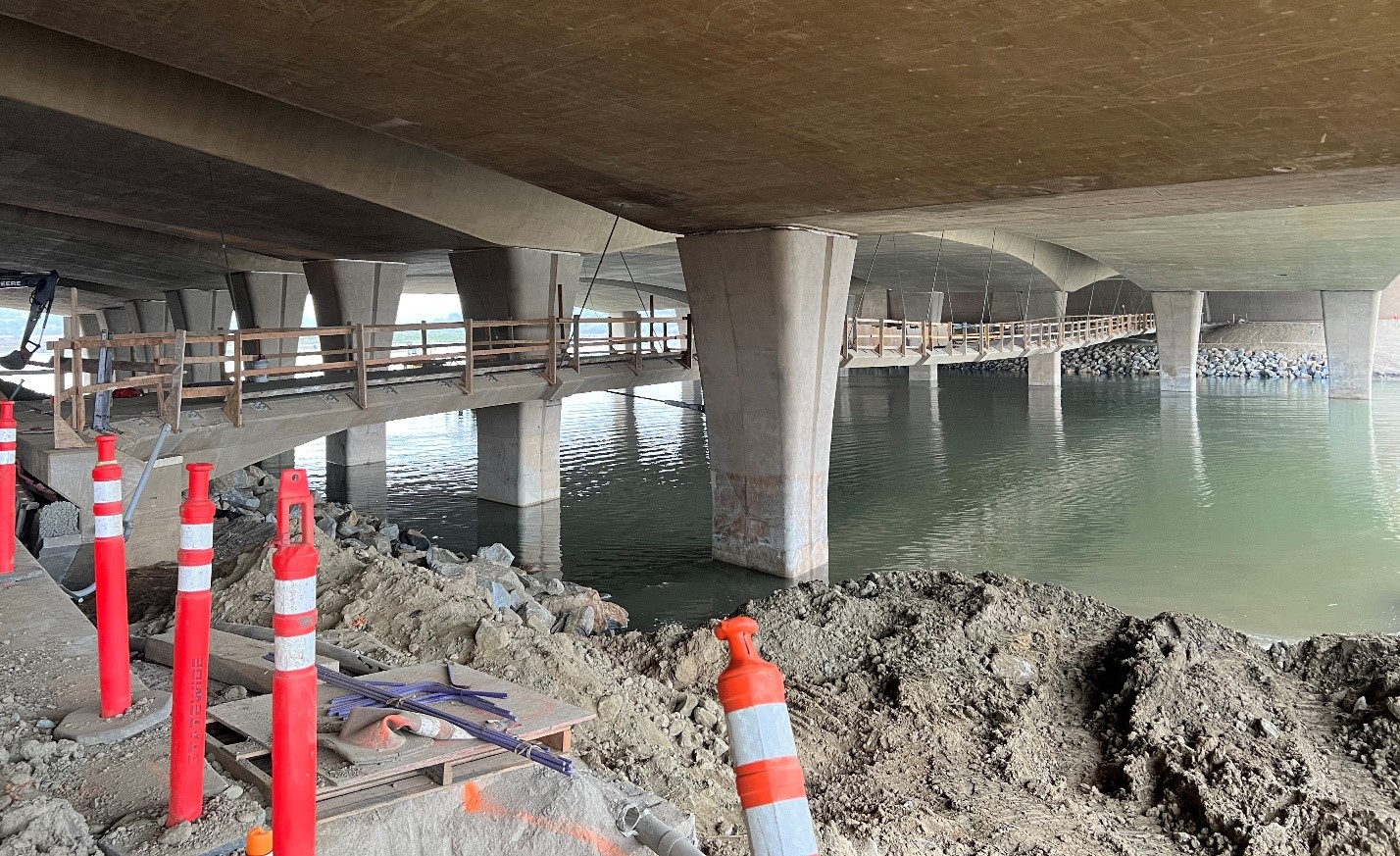 Cyclists and pedestrians now are able to travel across the San Elijo Lagoon and have access to more than seven miles of trails. 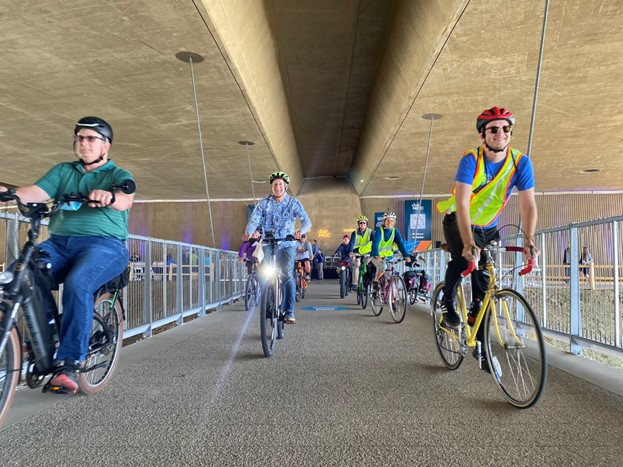 Cyclists celebrate the opening of the new suspended bridge over San Elijo Lagoon with an inaugural crossing.

A safe environment for all ages and abilities has been constructed to improve the mobility of non-motorized users. Bicyclists and pedestrians, including young students, no longer have to interact with motor vehicle traffic for the project’s entire length, significantly increasing safety throughout the project corridor.

The project will help fulfill the vision laid out in the San Diego Regional Bike Plan to make riding a bike a very feasible form of transportation for everyday travel, which in turn reduces greenhouse gas emissions by providing transportation alternatives to driving a vehicle.