The Riverside County Transportation Commission (RCTC), in partnership with Caltrans, is widening a 4.5-mile section of Route 60 between Gilman Springs Road and a point 1.4 miles west of Jack Rabbit Trail. This region through Riverside County between Moreno Valley and Beaumont is known as the Badlands. 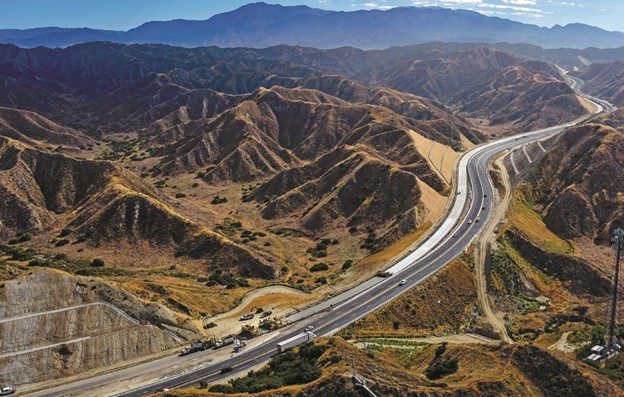 The Route 60 Truck Lane Widening Project presents some significant challenges to general contractor Skanska USA Civil West, as the highway cuts through mountainous terrain with curving alignments and steep grades. The scope of work on the project includes the construction of new truck lanes in both directions, widening of shoulders, engineering flatter curves, and raising the height of the medians. All of the elements of the project are designed to improve safety and reduce traffic congestion.

“This long-awaited project will help save lives, since this stretch of Route 60 experiences higher than average traffic collisions that cause fatalities, injuries, and delays,” said RCTC Chair Chuck Washington, who also serves as a Riverside County Supervisor. “The new lanes will improve cross-county travel, including better access to employment and tourism destinations in the Coachella Valley, further boosting our economy. In addition, the project will allow locally-based Skanska USA to add construction jobs in Riverside County,” Washington stated.

According to the latest figures, approximately 2,500 jobs were created by this project. 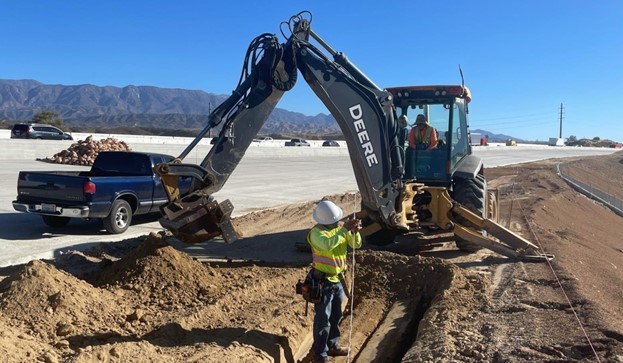 The State Route 60 Truck Lanes Project will improve motorist sight distance through the Badlands by flattening the roadway curves.

Begun in July 2019, the total investment in the project is $138.4 million, with $113 million in construction costs. Targeted opening for the new lanes is summer 2022.

Rafael Gutierrez is the Senior Project Manager at Skanska who is overseeing all aspects of construction on the job. “The original Route 60 roadway was constructed in the 1960s, and the curves were not to current standard,” Gutierrez explained. “We’re performing a complete remove-and-replace while realigning to make the curves smoother. The vertical curves were also designed and built to new standard specifications.” 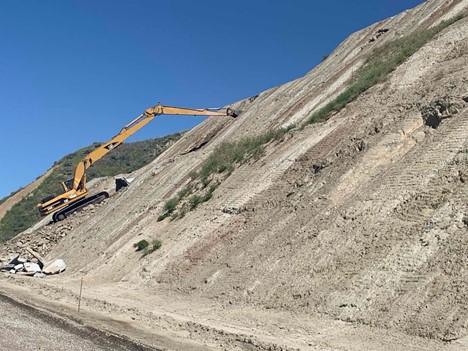 Once the slope angle is modified, scrapers are able to begin their work.

Since much of the roadway lies within environmentally sensitive areas, explosives couldn’t be used to begin to reduce the steep elevations. As some of the hills were as high as 200 feet, they were initially too tall for scrapers. Bulldozers were used first to push the hard-packed, silty dirt down to excavators, which then loaded it into trucks for removal. In total, 2.2 million cubic yards of dirt have been excavated.

The concrete paving portion of the SR-60 Truck Lanes Widening Project is being performed by subcontractor Coffman Specialties, Inc. With the existing asphalt pavement milled off and used as subbase material, the pavement design has a 4” asphalt base capped by 12” of concrete on the inside lanes and 15” of concrete on the truck lanes and outside shoulders. Approximately 110,000 cubic yards of concrete will be used to pave all of the appropriate roadway sections.

Skanska is self-performing the mass grading and excavation on the project, along with doing all of the structural concrete work. They’re installing 26,000 feet of concrete barrier and building a 60,000-square-foot, mechanically stabilized embankment (MSE), which is made of geosynthetic straps and concrete facing. 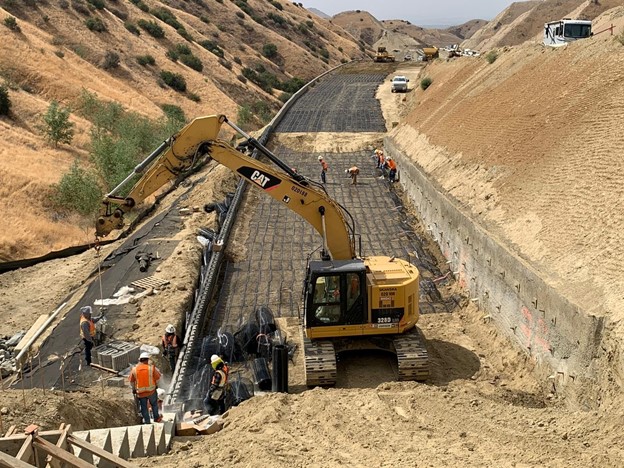 Progress continues on building the Mechanically Stabilized Earth (MSE) wall, which consists of precast blocks connected to a high-strength polyethylene grid system and reinforced by the soil and backfill behind the blocks. This type of wall is used throughout California and has proven stable under seismic testing.

Senior Project Manager Gutierrez stated that the experienced crews are making it a success – not only for the traveling public, Skanska, Caltrans, and the Riverside County Transportation Commission, but also for the area’s diverse wildlife.

“We want to build something that’s useful and meaningful,” Gutierrez stated. “We definitely don’t want to destroy habitat. We want to keep wildlife as wild as we can.”

For the first time, bobcats, coyotes, mountain lions, and several species of birds and snakes can safely get from one side of the road to the other, which is set on a steep slope.

Skanska is also constructing two 201-foot-long, reinforced-concrete box culverts, 20 feet tall by 20 feet wide, specifically tailored for animals to get from one side of the highway to the other. The underground crossings are designed to be tall enough to enable animals to see light at both ends and feel safe enough to enter. The two culverts are spaced a mile and a half apart beneath SR-60. 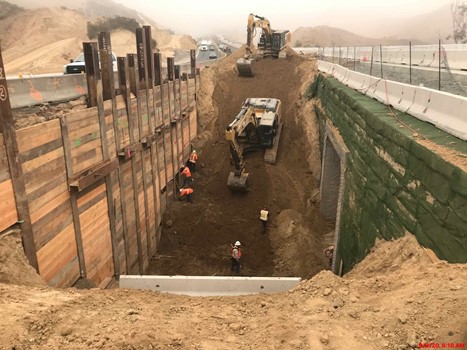 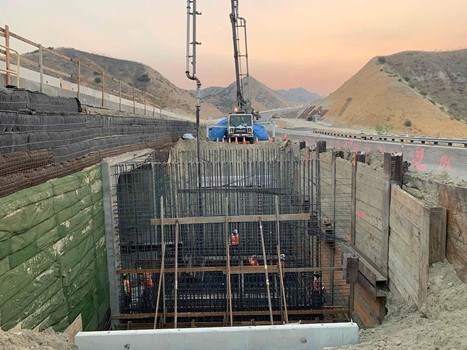 The mid-sections of the wildlife tunnels provided the biggest challenge because of their 32-foot depth, limited space, and proximity to traffic.

The boxed crossings are being built in three phases, allowing traffic to keep moving to and from the nearby desert resorts of the Coachella Valley. The 26-foot-long mid-sections pose the biggest challenge, with traffic rapidly flying past.

“Working in the median between eastbound and westbound traffic was the toughest challenge because the excavation was deeper than it was wide,” Gutierrez explained. “It’s really tough access to get down to the bottom of the boxes.” 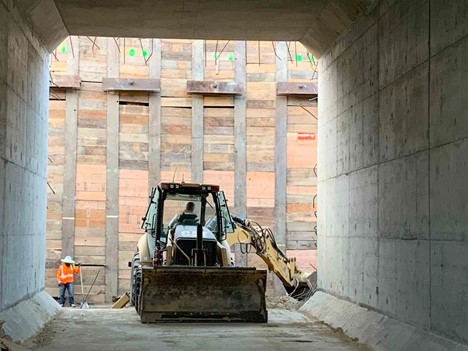 The interior of one of the wildlife tunnels on the Route 60 Truck Lanes project.

To keep traffic off each tunnel section under construction, the 20-foot by 20-foot concrete boxes were built in three phases. During the first phase of construction, the lane above the first tunnel section being dug was closed off. Once that 30-foot section of reinforced concrete box was successfully placed, traffic was then moved back to travel over it. The process was then repeated for the other two sections, with beam and lagging used to support the excavation next to and underneath the freeway.

“After the second phase was complete, we were supporting both the eastbound and westbound sides of the 60 freeway with shoring. We then moved onto the third phase, which was in the middle,” says Gutierrez. “The approximately 30-foot-deep excavation was performed with Cat 336 excavators and without much room to work in-between stages.”

Wildlife Safety Was a Paramount Consideration

Throughout the entirety of the project, a full-time biologist has been on site to help facilitate the crossings and assist the project team in identifying the animals that are native to the area and will use the crossings once construction is completed.

A coyote approaches one of the wildlife undercrossings on the Route 60 Truck Lanes project.

Along with bobcats, deer, coyotes, possums, mountain lions, birds, and snakes, the area is home to more than two dozen protected species, such as badgers, burrowing owls, and San Bernardino kangaroo rats.

But many members of the road crews will argue that the biologist’s biggest help has been to identify, capture, and relocate the rattlesnakes they discover out in the brush and, more menacingly, seeking shade under the lumber stacks, in the pipes, and even underneath vehicles. 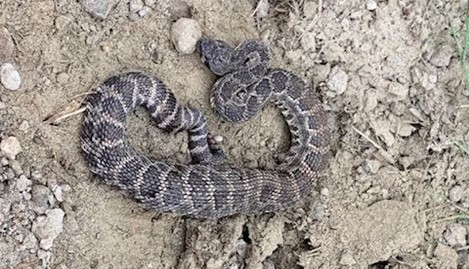 Red Diamond and Southern Pacific are the two most frequently identified species of rattlesnake at the Badlands project.

Red Diamond and Southern Pacific are the two most frequently identified species of rattlesnake at the Badlands project.

The project is now in its final phases. Starting in December 2021 and going through April 2022, Skanska will begin removing the temporary pavement sections and perform all final striping, signage, guardrail, and landscaping work.

To see the latest drone video of the State Route 60 Truck Lanes Project, go to: