To accommodate the new California High-Speed Rail Line that will run through Fresno, two miles of State Route 99 within the city needed to be moved 80 feet to the west. This massive undertaking required an extraordinary partnership and exemplary teamwork between 19 diverse agencies and companies. Before realignment, this section of Highway 99, the Union Pacific Railroad tracks, and a parallel frontage road all travel beneath the old Clinton Avenue interchange in Fresno, February 2016.

Extraordinary Partnering Was Key to Success

Caltrans, Granite Construction, and local stakeholders met on a weekly basis to maintain open communication and ensure clear understanding of all ongoing aspects of the project.

This “own the game” effort enhanced communication and cooperation, enabling the agencies and companies to work harmoniously together and find solutions quickly that otherwise would have hobbled other multi-partner project teams. In fact, the SR 99 Realignment Project now serves as a model for best practices in partnering complex mega-projects.

As a testament to the strong team relationships fostered through Partnering, Caltrans Central Region Construction Office Chief Mike Weber said: “There is a strong momentum amongst the Caltrans/Granite team and a feeling that any challenge can be resolved by our collective efforts to put the interests of the project first; then fairly resolve compensation responsibilities. A truly world-class team with blurred organizational lines and a “project first” focus is what true partnering is all about and it is how this team did business on this project.”

All of the team members attest that the partnership was founded on trust and transparency, reinforced through daily interactions at all levels of the partnering pyramid. This was all tested early on in the project when owner funding constraints threatened the award of the contract as a budget shortfall of $15 million was identified. Caltrans, Granite, and CHSRA worked together to formulate $27 million in value engineering solutions, enabling the project to move forward and eventually complete within the owner’s budget.

The Scope of the SR 99 Realignment Project

As an integral part of the California High-Speed Rail Authority corridor, the realignment project entailed shifting two miles of SR 99 approximately 80 feet to the west to make room for the new high-speed rail corridor between Merced and Fresno. Along with the highway relocation, three overcrossings were demolished and reconstructed to accommodate the high-speed railway. 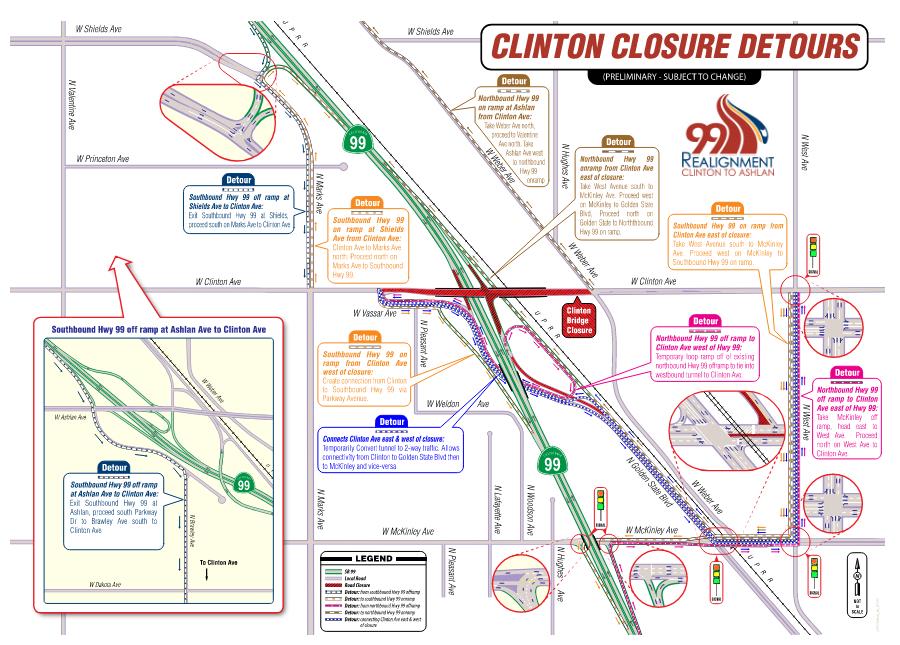 To inform the public, the project team put together an extensive public outreach campaign utilizing social media, local media outlets and town hall meetings. Visual maps and pamphlets were also created to explain the complex closures and timelines to the community. In addition to the public, the SR 99 team also had to work to obtain buy-in from numerous businesses that would be impacted along the project’s two-mile path. The acquisition process involved 42 business properties, and negotiations were often arduous and required creative solutions. In the case of the Fresno Rescue Mission and former Hacienda Hotel, a historic Fresno landmark, plan redesigns were made that enabled both to continue operations and allow highway construction to proceed without incurring extra costs.

The full scope of the project included road and bridge work, wet and dry utilities, traffic signals and utility relocations, as well as full project landscaping after the highway work was substantially complete and open to the public.

A representative example of project innovation came with the reconstruction of the Clinton Avenue interchange. Full closure of the Clinton Avenue Overcrossing enabled construction of the new span to be completed within just seven months.

Initial scheduling showed a lengthy construction timeline of 18 to 24 months to transform the interchange due to a phased construction approach, utility relocations, and right-of-way acquisitions. Given those constraints, it became clear the realignment of SR 99 and the Clinton Avenue interchange reconstruction needed to occur simultaneously to deliver the project within a more ambitious schedule. The crew sets the new girders into place on the first span of the Clinton overcrossing.

The project partners chose a bold but potentially unpopular approach — close the busy Clinton overcrossing altogether. The move would shave the overcrossing construction time to seven months by giving crews unfettered 24-hour/seven-day-a-week access to the site. With innovative solutions such as developing “Early Work Packages” to complete utility relocations and building mitigation measures prior to the closure, revising the geometry along the corridor, and minimizing impacts to businesses avoiding costly right-of-way acquisitions, the project team delivered on their promise and completed the overcrossing work within the seven-month timetable. Grading takes place for the new concrete pavement of this new section of Highway 99, while abutment construction of the Clinton Avenue Overcrossing extends over traffic lanes.

The closure proposal also relied on an extensive detour plan and outreach campaign to get city, UPRR, and resident approval for the project. Since east-west access for residents and businesses would be cut off due to the construction, the team appeased constituents by instituting a dedicated bus service to carry people across the Clinton overpass seven days a week. Concrete is pumped up in a two-Bidwell-deck pour to form the new Clinton Avenue Overcrossing.

Additionally, the team developed innovative traffic mitigation ideas, such as the use of an existing undercrossing south of Clinton Avenue, which is a permanent off-ramp in the final configuration, converting it into a temporary two-way roadway allowing traffic to get from one side of Highway 99 to the other. Additional traffic-flow innovations were developed for northbound and southbound traffic as well. With the overcrossing in place, work progresses in building the on- and off-ramps.

The SR 99 Realignment Project spanned five and one-half years, with more than 1,000 people involved in the design, planning, and construction, totaling 585,293 worker hours.

This was the largest state highway project ever in the region, at $290 million. Adding challenge to the work, the project was located in a densely populated area of Fresno and replaces one of the busiest truck routes in California. Highway 99 is one of California’s most heavily traveled and commercially important corridors, accommodating an average of 114,000 vehicles a day, with trucks making up 17% of that traffic. The new section of highway replaced the original portion of SR 99 that hadn’t seen major improvements for at least 50 years. The finished project delivers a vastly improved traveling experience on the highway. Drivers now ride atop a smooth, long-life concrete pavement in six lanes, three in each direction. The SR 99 Realignment Project eliminated a cramped, outdated design that was hampered by three non-standard partial interchanges built in an earlier era. The new roadway and interchange designs feature the latest advances in safety and traffic innovations, along with easing gridlock along the highly congested east-west corridors.

The impact of the realignment reached far beyond that of the highway. An innovative design allows for a smaller route footprint, which minimizes the impact on the adjacent businesses and also enhances the aesthetic appeal of the area. The project improves the local traffic circulation and accessibility for adjacent property owners and injects new vitality into surrounding neighborhoods and local businesses. Inclusion of new landscaping, wider walking paths, and bike paths all make for a more livable urban core.